IS MOROCCO A SAFE PLACE TO VISIT? 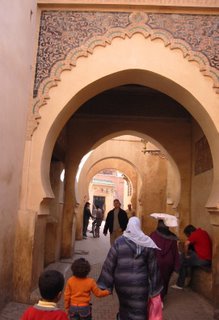 When I announced to my friends that I was going to Morocco for a few weeks in December and January, almost all of them were wary. Everyone knows I have a penchant for the kind of exotic travel that leaves most Americanos flat, but to march voluntarily into the maw of the beast??? Well, first off Morocco's pro-Western monarchy is much-loathed by primitivist and fundamentalist backers of groups like Al Qaeda and, indeed, Casablanca suffered a suicide bomb attack in May, 2003. It wasn't as damaging as the ones in New York, Bali, Madrid or London but something like 40 people died and 100 were injured. Over 2,000 people have been arrested. Velvet gloves and smiley faces or not, Morocco is a police state and a dictatorship; you don't want to run afoul of the Man in that country. Is it safe? Is New York? Is London? Is anywhere?

As for the Moroccans, they seem extremely pro-American, at least as far as I could tell. Virtually everyone I met had nothing but disdain for the Bush Regime, of course (I mean name a place that doesn't other than, perhaps, Israel, Utah and the Old Confederacy) but in terms of American culture, American ideals, and, more to the point, American people, the Moroccans are all thumbs up.

Unlike the French, British, Spanish, Portuguese and (almost) the Germans, Morocco never had a colonial problem with the Americans. Morocco was actually the first country in the world to officially recognize U.S. independence and official relations have always been good. There's a natural affinity between Moroccans and Americans. And, a little bonus, of all the Arabs anywhere, the Moroccans seem by far the least hostile towards Jews. (One Moroccan I met on this trip told me, with more pride than accuracy I think, that the first government of independent Israel was comprised mostly of Moroccan Jews.) When we first got there and people would ask where we are from I would always say "California in America." At first Roland would grimace and ask me if I was trying to get us killed-- since there are relatively few Americans traveling in Morocco and people assume when they hear English that you're a Brit-- but after a couple of days worth of huge, sincere smiles at my answer, even Roland admitted that, despite what they feel about Bush, Moroccans like Americans.

A friend of mine in the Bali tourist industry told me last year that an average American on vacation in Bali will spend five times what an average European, Japanese or Australian will spend there! I have no reason to believe the figure is substantially different for Morocco. And that kind of spending makes a lot of friends. The owner of a fancy restaurant in Marrakech told me that Americans were the only consistently good tippers, and this in one of the most esteemed restaurants in the city. (When we ate there it was full of French tourists. When the owner asked me how I liked the salads, I was extremely enthusiastic and before I could readjust myself in my seat, a complete encore of the dozen little plates of salad arrived at the table. I didn't notice that on any of the French-occupied tables around us.)

I'll tell you why I rate Morocco as a relatively safe place for tourists. It's the exponential growth of the middle class there. Morocco is a pretty rich country. Unfortunately all the wealth has been concentrated in a very few hands. Under Hassan II things started loosening up and now under his son Mohammed VI, things have really taken off. A Moroccan friend of mine told me it's because of the relaxation in once prohibitive rules about mortgages and borrowing. But whatever the reason, there appears to be a Moroccan middle class that is a lot bigger and a lot more influential than there was on any of my previous 9 trips to the country.

Marrakech might have once been scary for a typical tourist. Today Marrakech is a pretty cosmopolitan city that is very much part of the "international scene." I heard a report on the BBC about the fastest growing real estate markets in the world. I don't recall them mentioning London or Paris or Los Angeles. It was all about Shanghai and Singapore and... Marrakech! Fes still has a way to go, but even Fes, once the scariest and most forbidding city in the country, is pretty tame. Tangier has been tame far longer, but it seems very much a user-friendly blend of East-Meets-West these days.

I've been to every remote region in the country, from the kif "badlands" up in the Rif Mountains to Sidi Ifni, Ouarzazate, M'hamid and all through the High Atlas. I've always felt pretty secure and an easy-going. Exotic, yes; dangerous, nah.

I'll stand by what I've said about the natural affinity between Moroccans and Americans and what a safe environment I've found on my trips to Morocco. However, I found some cause for alarm in today's SUNDAY TIMES (London). "The United States is helping Morocco to build a new interrogation and detention facility for Al-Qaeda suspects near its capital, Rabat, according to western intelligence sources. The sources confirmed last week that building was under way at Ain Aouda, above a wooded gorge south of Rabat’s diplomatic district. The construction of the new compound, run by the Direction de la Securité du Territoire (DST), the Moroccan secret police, adds to a substantial body of evidence that Morocco is one of America’s principal partners in the secret 'rendition' programme in which the CIA flies prisoners to third countries for interrogation."

This isn't good news for Americans thinking about visiting Morocco because it could make tourists into targets in the minds of extremists and radicals. Non-official media in Morocco have accused the government of turning Morocco into "the CIA's dustbin."


UPDATE: APRIL, 2007-- SOME SAY THE THREAT OF TERRORISM IN MOROCCO IS VERY REAL

Morocco is not immune from a general terrorist threat in the Islamic world. And some say intricate political considerations have kept Morocco from effectively protecting itself from the scourge. Sadly, it might be something for you to take into consideration when making travel plans. Today a couple of suicide bombers blew themselves up in an attack on the U.S. consulate in Casablanca. This was hot on the heels of lethal bombings in neighbouring Algeria in which 33 people were killed by a group claiming affiliation to al-Qaeda.

One day after the latest attacks the U.S. government warned of a high risk of violence against U.S. citizens in Casablanca and advised Americans to stay at home. "The potential for violence against American interests and citizens and other Western targets remains high in Morocco," is how the State Department put it. The Khaleej Times warns that "Establishments which are readily identifiable with the United States are potential targets for attacks." Today's L.A. Times seems most concerned about the coordination of attacks in Algeria, Tunisia and Morocco with al-Qaeda. On the other hand, my friend Alisse just got back from a week in Fes-- which she loved-- and she didn't pick up on anything that seemed remotely threatening.
Posted by DownWithTyranny at 4:04 PM

Great to see someone posting a positive Moroccan travel story - and I agree with you Howie.
There was a real stink when a tourist (yep - ONE TOURIST) had a bag snatched last year. The tourist police in the medinas do a great job and have cracked down on all sorts of scams. The Moroccans know they have a huge investment in tourism and certainly don't want it ruined.
Thanks Howie.

it really annoys me when i hear people thinking negative about not only people in Morocco, but in most arab countries.. they are the most friendly people i've met! cant compare with europeans, except maybe italians.. the minority that has something against west shouldnt be judged by!

thanks 4 this info it sure has helped me feel a little less afraid about traveling to morroco next week.

The International Language Lab Center (I.L.L) was established in 2006 in the coastal city of Temara in the Kingdom of Morocco. We take a modern lively approach to teaching. Our curriculum is constantly updated and we guarantee our results. We teach English to the World and more than 10.000 people decide to study with us. Our audience ranges from the kids, youngs, adolescents and adults. We specialize in teaching General English and English for Specific Purposes in all domains.

I.L.L in affiliated with the International World Wide organization of Language Schools of English. We are officially the representatives of many universities, schools, organizations and Institutes in the USA, the UK, Canada….
We take a modern approach in all of our courses, utilizing cutting-edge technology in a multi-cultural environment. We also include a variety of activities based on course books, audio-visual aids, and specially-created materials 2008. We emphasize effective development in the four language skills (reading, writing, listening and speaking) with special attention paid to communication and conversation in different contexts and situations.

I'm headed to Morocco in June 2010. Last there 15 years ago and I loved it. At that time I was told they kidnap Americans and sell them into "white slavery". We were told the berbers come from the mountains and do the kidnapping and we should never go out alone. Throughout my trip, all Morrocans were extremely friendly and I found the country fascinating and I loved everything about it. I look forward to revisiting it again in 2010. Before I was in Spain and took the febby across the straits of Gibralter into Tangiers, and traveled by motorcoach and ended in Cassablanca.

how amazing place... thx for inormation :)

It's a beautiful thing to see how people are interacting and learning about different countries around the world. I'm a Moroccan and have been in the US for more than 4 years and I really do appreciate every second I'm living here. Morocco is one of the safest places out there and I will strongly recommend to everyone to go have an exotic trip there. Funny that my American wife thinks, and I agree with her that you have to worry about getting shot any minute in one of the schools, stores in the US than Morocco...

Im Moroccan! and my husband is American...He loves morocco a great deal , and been there 12 times :)
I think morocco tend to keep a very friendly attitude towards all foreigners, i worked in hotels industry and i know for fact that toursits that come to morocco leave happy. It s very safe , most people are open minded ...and honestly i traveld a lot but nevr seen a similar hospitality.
Rania

I would suggest booking a tour with a personal guide as we did. Our time was amazing due to the more care and attention we had from the guys at Bouaouinatours.com. Highly recommended!