TOLEDO ISN'T A BAD PLACE, BUT IF FROMMER THINKS THIS IS THE BEST CITY IN SPAIN, I'D LIKE SOME OF WHATEVER HE'S SMOKING 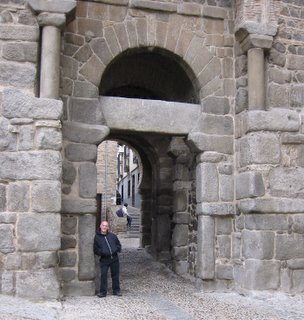 I've lost count of the number of times I've been to Spain since the 60's. I love Spain-- the people, the culture, the language, the food, the history... Reading FOR WHOM THE BELL TOLLS in high school, right after seeing Picasso's "Guernica" at the Museum of Modern Art for the first time, helped me understand that the political right has always been and will always be the mortal enemy of humanity. Even when the fascist monster, propped up by American post-War hegemonists, was still in control, I used to love visiting Spain. (I even had my first UFO experience there some time in the '70s.) So in planning out my vacation in Morocco I was eager as can be to include a week in Spain.
I figured we'd fly into Madrid, kick some jet-lag, eat some great food, walk around El Prado, and then make our way down to the Algeciras-Tangier ferry via Cordoba and Sevilla.

Roland got all gung-ho on Toledo, so I squeezed that into the schedule too. I mean, how could I resist this rationale: Frommer-- "If you visit only a few Spanish cities in your lifetime, make beautiful, romantic Toledo one of them." Now that sounds like a pretty strong endorsement and it's so close to Madrid, a really easy day trip.

It's a nice city, probably worthwhile, nothing really wrong with it. But the Toledo Chamber of Commerce must have hired Jack Abramoff to get to Frommer for that quote! Toledo is worth a couple of hours, if you've spent enough time at El Prado, the Museo Centro de Arte Reina Sofia, the Thyssen-Bornemisza Museum, and if you've wandered over all the neighborhoods of central Madrid and if you've already spent lots of time in the real treasure cities of Spain, like Cordoba, Sevilla, Barcelona and Granada. I enjoyed the Pamplona running of the bulls more and Ibiza was a way better experience too. But, hey, Toledo is ok-- kind of cold in December and desolate/lonely and... well, everything was closed and all you see is gaggles of camera-toting tourists...

We took the train; it's about an hour or so and the station was an easy walk from out hotel in Madrid. We had lunch in a beautiful setting, the highly-rated Hostal del Cardenal, "Toledo's best-known restaurant," according to Frommer, who even refers to a "chef." Although the restaurant is in the lovely hotel, that location is the best thing that can be said about it, and the idea of calling whoever is preparing the food a "chef" is patently absurd. This restaurant is a tourist feeding facility with nothing whatsoever to offer in terms of culinary sophistication (especially in light of Madrid's restaurant scene, one of the absolute most magnificent in the world). Del Cardenal reminded me of what I don't like about Venice: the food is for tourists who come and go and who don't really have to be catered to because the next day they'll be somewhere else. So you get a somewhat gentrified version of slop.

The Alcazar and the Cathedral were better but they don't hold a candle to what you see and feel in Cordoba or Granada or Sevilla. Toledo is better than mediocre but Frommer must have had a hot date there or something to rave about it the way he does. I'll write up some stuff about the places we loved-- Madrid, Cordoba and Sevilla-- in the next few days.
Posted by DownWithTyranny at 11:12 AM