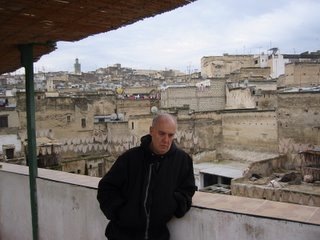 Traditionally the main entrance to Fes-el-Bali (Fes' old walled medina) is through the beautiful Bab Bou Jeloud. Two things were "missing" when I strolled over to take a look a couple weeks ago. One was the large... birdcage in a corner of the square where the captured crown prince of Portugal was once displayed as he slowly died of starvation; and the other was the truly intolerable myriad of uber-aggressive "guides" (angry, unemployed young men with major chips on their shoulders). The scourge of tourist tranquility, the hordes of these pests are pretty much... gone (as they were even earlier from Tangier and Marrakech). I think Fes was the last hold out.

An aside here. Roland and I were once walking around in the late afternoon, wandering aimlessly in the vicinity of the Bab Bou Jeloud when a particularly obnoxious, snarling guy insisted that we couldn't walk around without him. The discussion quickly degenerated into him cursing and screaming at us and calling us Jews and Americans and whatnot; very threatening. When a cop appeared out of nowhere and grabbed him we were very relieved; our relief turned to mortification when the copy commenced beating him savagely. But I guess why we didn't see him or any of his colleagues on this trip.

There are now signs posted throughout the labyrinth that makes up the old city, marking sites and routes. I mean, it could be Rome or Dublin almost. It is no longer the forbidding, scary place it has always been reputed to be. We never even felt intimidated to not walk around late at night. We wandered around anywhere we wanted for 3 days essentially unmolested. Maybe the Fassi saw the benefits tourism have brought to Marrakech, but something-- maybe aggressive police action-- has made Fes' medina a lot more comfortable for tourists-- and a lot more profitable for bazaris. It isn't Disneyland yet and you won't see Ma and Pa Kettle ambling around alone yet, but that's probably coming soon. I definitely saw a lot more European families walking around freely.
Posted by DownWithTyranny at 9:26 PM