Urban Gadabout: Jack Eichenbaum's "World of the #7 Train" is rescheduled for June 14 -- plus Jack has interesting evening tours in June 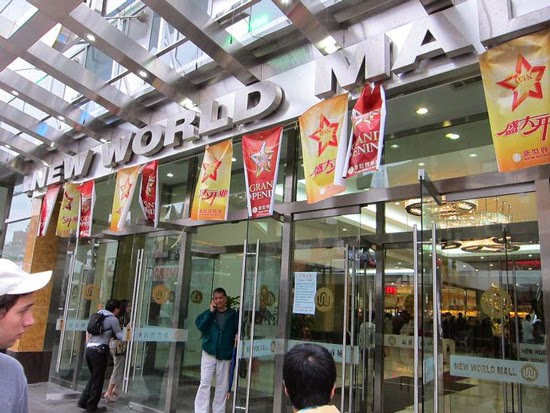 I guess I can say that I don't do well when it comes to event reschedulings. On the plus side, my bad luck (or whatever it is) could be an opportunity for you if you thought you were closed out of this year's edition of Jack Eichenbaum's "signature tour," "The World of the #7 Train."

We'll come back to that in a moment, or you can just skip down to it while I tell the sad tale of my last mandatory rescheduling. It was for what sounded like a really interesting coffee tasting offered by a

I bet I was the first person to register, and also the most eager person to register. Three dates were offered, and I could only do one of them, the last, so naturally that was the date I registered for. Then came the news that there hadn't been enough demand for the event (what's wrong with people? they'll sign up for all kinds of godforsaken crap, and then something really interesting comes along . .  .), so it was going to be offered on only one of the three originally announced dates. Which of the dates, we were asked, could we not do? Naturally I answered promptly, saying that I couldn't do either of the other dates. I don't know whether the Vegas odds-makers heard about this, so I don't know how much you would have won if you had put money on the thing being rescheduled for one of the other dates, but of course you would have won.

Oh, I was sorely disappointed. If you don't count all the crying and whining I did over the next several days, I took it pretty well. After all, what're ya gonna do? And even here I managed to find a bright side of sorts: Do I really need to be looking for ways to up my coffee consumption? In any event, I could still have gone to the place to check out what they offer. I never did, though.

Anyway, back to "The World of the #7 Train. It was scheduled for this coming Saturday, May 31, and it was sold out. I first did it a bunch of years ago, and since then I've done Jack's J train and Q train tours, and this year I decided I was ready to do the #7 tour again.

Jack was keeping close watch on developments coming out of New York City Transit. For a while they weren't going to run the #7 train into Manhattan that weekend, which would have been an inconvenience but really wouldn't have affected the tour itself, but in any case that service advisory was subsequently dropped. This close to the event, Jack thought we were home free.

And then NYCT struck, in the form of a casual announcement that on "our" weekend the #7 would be shut down west of Jackson Heights. That would have knocked out half of the scheduled mini-walking tours along the route. No way we could proceed on the 31st.

Jack sprang into action, sounding out us tour registrants with a list of possible rescheduling dates, asking us to let him know which each of us couldn't do. To my surprise, there were a bunch of dates I actually could have done. Maybe my luck was turning?

Okay, this is where you come in. Apparently there were a fair number of other people who couldn't do the newly decided rescheduled date, Saturday, June 14, and our misfortune creates openings for others. if you want to do the tour and can do it on June 14, I suggest you e-mail Jack (at jaconet@aol.com) and make your interest known and see what's what, and be ready to shoot him a check for the paltry $40 cost. (You can tell him I sent you, which is true after a fashion.). If you can snag one of those newly opened spots, you won't be sorry. It's a great tour.

In the summer Jack usually schedules a number of evening walks of his own, and the June schedule he has announced looks really interesting.

In what is a most remarkable transition from wealth to poverty, the grand apartments on the Upper East Side of Manhattan yield to the tenements and projects of East Harlem in just a few city blocks. The slope where this transition occurs actually stretches from the Hudson River to the East River and historically, has always marked a change in land use. The Dutch colonists in Nieuw Nederland began this process when they established the agricultural community of Nieuw Haarlem in the Harlem Valley in 1658.

We’ll walk from Queens Plaza to the East River waterfront.  Rezoning and demographic change stemming from Manhattan spillover spark revitalization in this once stagnant industrial neighborhood. A lively arts community and restaurant scene has developed. The Plaza, where transit lines intersect, has been rezoned for hotels, condos and offices. Gantry Park, on the East River, is the perfect place to view the midtown Manhattan skyline at sunset. Restaurants abound on nearby Vernon Blvd.

Meet at the fare booth on the lowest level of the Queensboro Plaza station (N,Q,7) Fee $15