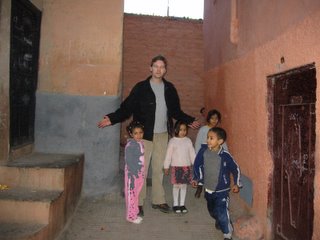 A riad is an urban house situated in the medina or kasbah. It isn't a random loosely defined lodging but one whose plans and arrangements are rigorously codified. Since Moroccan architecture is more inward looking and given to isolation and intimacy rather than showing off, a riad is a private, cloistered place of escape from the busy swirl outside its thick walls. A riad is organized around a central square courtyard, often decorated with zelige (traditional mosaic patterns) centering on a fountain and orange or lemon trees. 4 paths intersect in the middle. The central courtyard is usually surrounded by an arched colonnade giving access to the living rooms and kitchen. More sleeping areas are constructed on the upper floors, creating a covered arcade around the patio with balustrades running around each story. Traditionally roof top terraces use awnings to protect against the sun; great place for a meal.

Marrakesh is the riad capital of Morocco-- and they are more than giving the hotels a run for their money. A concierge in Tangier told me he was trying to book a room for a client who was going to Marrakesh the following week and there was not one room available anywhere in town! Europeans and forward-looking Moroccans have been buying up stately old homes, restoring them to their original splendor and turning them into riads. Their thick walls protect the inhabitants from the heat or the cold and most of the outside noise and hustle and bustle. More often than not, you find them along a derb (narrow alleyway) with no access by car.

This was my 10th visit to Marrakesh but the first in a riad. It so beats hotels I don't know where to begin. I guess the 2 things that impressed me most of all were how personal the service was and how integrated you feel in the rhythm of the media which you feel like a resident of. In the past I've stayed at the the Mamounia Hotel, easily the best hotel in the country, and always a contender for best hotel in the world. It was famous for being a home-away-from-home for European aristocrats and for Winston Churchill. The chilly, aloof, snooty service still seems to be expecting Churchill-- and we did see Mick Jagger's ex, Jerry Hall there on New Years Eve when we went over to see if the gardens were still as gorgeous and lush as we remembered them (they were)-- but... well, you're more likely to be hanging around a busload of Belgian housewives on holiday than anyone with a von or van in front on their name. The last time we stayed there Roland left some considerable amount of cash in the inside pocket of a suit jacket inside the wardrobe (never a good idea but I guess he felt safe in "the best hotel in the world"). We were at dinner for 90 minutes and when we got back, the cash was gone. It isn't like he left it on a bench at the bus station. I mean how many people had access? But the hotel management was aggressively unhelpful and when we called the police, the hotel became downright nasty. Beautiful rooms, beautiful gardens, rapidly accelerating rates and not a place I'd ever stay again. So... weren't we happy to find that riads had sprung up all over the medina and were reputed to be offering as wonderful an experience as the Mamounia!

There seem to be riads at many price ranges. I read about them online and found one that looked like it would be good for me, the Riyad el Cadi-- and did I ever come up with a TOTAL WINNER! Maybe there are better riads in Marrakech but I will probably never find out because I loved the el Cadi so much I'll always go back. Their website and this general riad site have good descriptions and details. But after the utterly impersonal service at the gorgeous (and formerly very personal) Palais Jamai in Fes, the wonderful total service/family atmosphere of the el Cadi was perfect. Anyone looking to get away from impersonal hotel service and arm's length relation to the life of the country should try a riad. In a way it's total immersion as well as a somewhat authentic Moroccan style of accommodation, offering a haven of tranquillity in the midst of the medina. They are pretty much all architectural treasures, that will give you an insight into tradition, culture and craftsmanship. The el Cadi's art collection is really beautiful and displayed everywhere.

The riad concept is taking off in Tangier and starting in Fes. Essaouira has 'em-- although I didn't pick as well there. If you're planning a trip to Morocco, I urge you to do a little research and think about riads instead of hotels.
Posted by DownWithTyranny at 7:02 AM

Very interesting article and photos!
I understand that you that trip to Marrakesh was wonderful. I also was impressed when I visited this great city. Known as the ‘Red City’ due to the local clays that define the color of all the local buildings, locals used to say that the hue came from the amount of blood that’s been split into the soil – Marrakesh's history is as interesting as it is gory. We also lived in the riad (a traditional Moroccan house with an interior garden)! I think that all people want to remember their history and traditional living style! And it is great!
Maybe because of exotic and long history people investing money in Marrakech property!
We will never forget our time spent in Marrakech. The people, the food, the mystery and of course, all of the sights!

Riad seems to be an interesting sort of accomodation, its indian euqivalent is whats called a hawelli i think. They have a garden or a large courtyard within the house too, n the house is build in a country house fashion rather then a modern structure making use of all space to the max.