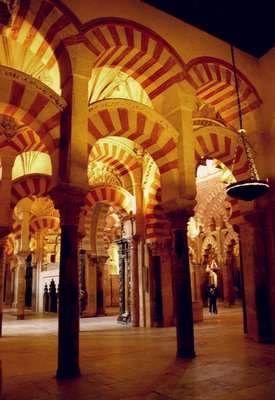 All that inordinate and undeserved praise Frommer lavished on Toledo actually aptly describes Córdoba! Once the capital of Muslim Spain-- and the biggest city in Europe-- it still preserves it's Moorish legacy and was one of the best places we visited on our whole trip. I can't believe I had always missed it in the past, always opting for Granada and Sevilla (two other awesome cities in Andalusia). I think the express train ride from Madrid was 90 minutes. We stayed at the NH Amistad Córdoba, two minutes walk from the heart of the action. Real nice hotel, with very sweet, helpful people working there, kind of personal... nothing fancy but VERY pleasant. (They're amenable to discounts too.) Córdoba is a real walking town so it's great to be in the middle of it where you can easily walk everywhere.

Aside from the truly wonderful vibe and living museum quality of the city itself, the main thing to see in Córdoba is the Mezquita, the absolutely most astonishing and grandest architectural achievement of the Muslims in Spain. It's gorgeous and immense and breathtaking and worth as many hours as you can spare. The mosque dates from the 8th Century, although when the Catholics took back the town from the Muslims they built some kind of weird-- but beautiful-- 16th-century cathedral right in the middle of it. The 14th century Alcazar de los Reyes Cristianos is the secondary place to see and that's pretty incredible too.

After the heavy and gigantic meals in Madrid we decided that lunches would be the main dining experience for the rest of the trip and that we'd eat tapas or light suppers in the evenings-- much healthier. The 2 best restaurants in town, La Almudaina and El Caballo Rojo are just ok, and, I'm sorry to say, very much over-rated tourist traps. I mean there was nothing wrong with the food in either (and both actually did serve delicious gazpacho) but they weren't all that special in the culinary department. They're supposedly the 2 most popular restaurants in all of Andalusia but that claim is patently absurd. Our luck totally changed when it came to dinner. Tapas was the name of the game and we found a place we went crazy for. You won't find it in a guide book but the concierge at the Amistad told us it was her favorite tasca in Córdoba; mine too! The name is Taberna Salinas (calle Tunididores #3, right off the Plaza Corredera, away from the whole tourist hubbub). It doesn't look like much but this tavern was founded in 1879 and the food they serve is spectacular, way better than anything at the fancy restaurants. They serve the gazpacho in a glass as a drink and I couldn't get enough! The bartender, Antonio, treated us like we were daily customers and the second night treated us like we were family.
Posted by DownWithTyranny at 1:34 PM