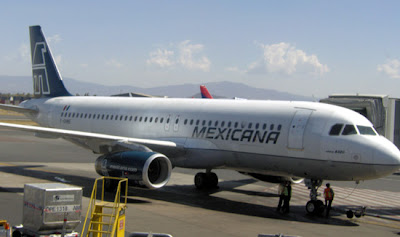 When Mexicana Airlines went bankrupt in the beginning of the month, most people thought they would, give up some routes, make some cutbacks and do some deals and be right back in business. Today they halted all flights. It was Mexico's biggest airline and the country's first-- third oldest in the world operating under the same name (after KLM and Quantas) and operated both domestically and internationally. It was the biggest foreign carrier, passengerwise, using LAX. With 110 aircraft and more than 11 million passengers annually, it accounted for close to a third of all domestic passengers in Mexico, primarily by ramping up operations at its 2 discount subsidiaries, Click and Link (both of which also ceased operations).

Last week an investor's group, Tenedora K bought 95% of the business, the pilots unions owning the rest. The Chapter 15 bankruptcy petition, which lists more than $500 million in assets and $1 billion in debt, bars U.S. creditors from seizing planes or canceling contracts. The airline is expected to restructure and start up operations again but no one is saying when. Meanwhile, Aeromexico, Interjet, Volaris and American Airlines are offering to accommodate stranded fliers. The investment group has been trying to squeeze more concessions out of the airlines' unions.

I fly a lot-- and on a lot of airlines a lot funkier than Mexicana. Sometimes Roland has to drug himself to get on puddlejumpers that fly domestically in places like Mali, India, Thailand and Egypt. So when we read last week that American Airlines isn't maintaining their planes properly, we let out a collective gulp. That's been a long time fear of ours-- corporate owners cutting back on resources for proper maintenance. And now the FAA is fining American for "$24.2 million for failing to adequately address a problem with wheel-well wiring that could cause fires in its fleet of 245 McDonnell Douglas MD-80 airplanes."

That comes right on top of the Justice Department signing off on a monopolistic merger between United and Continental that will create the world's largest airline-- and offer passengers ever fewer choices in the skies.

The airlines serve a combined 144 million passengers per year, flying to 370 destinations.

Critics of the merger between United and Continental have included Rep. James Oberstar (D., Minn.), the chairman of the House Transportation Committee.

"The Justice Department ought to turn it down," Oberstar said of the United-Continental bid to merge, adding, "The moment this thing is approved, I will draft and introduce legislation to reestablish market regulation by the government of airlines."

I wonder when the airlines really will start charging to use on flight toilets. They've certainly turning everything else they do into ways to rip off their passengers.
Posted by DownWithTyranny at 9:08 PM 1 comment: