When I travel outside the U.S., airports seem to all have free WiFi. And they have it at Oakland and in Jacksonville, though it doesn't usually work in the latter. But most U.S. airports seem old-fashioned and predatory when it comes to WiFi. Well Google's about to fix that... at least for the Holiday season (November 10 through January 15). And they're doing it in over 40 airports.

My own local airport, Burbank, is one of the lucky ones and, in fact, they announced that they'll continue Google's generosity indefinately. So will Seattle.

These are the airports getting the free WiFi:

No New York City, no L.A., no San Francisco, no Chicago and no Washington, DC... but who uses them anyway? Meanwhile though, Google has also worked out free WiFi for its entire hometown, Mountain View, California and "last month it partnered with Virgin America to give the airline's customers free access to Gogo's Inflight Internet" (also ending January 15).

E-commerce giant eBay said it will provide free WiFi through Gogo on more than 250 domestic Delta Airline flights during the busiest travel week of the year, over the Thanksgiving holiday. From Nov. 24-30, flyers who log in will be taken to eBay's holiday-themed homepage and invited to "complete your holiday shopping while still en-route to your Thanksgiving destination."

Car maker Lexus wrapped up one week of complimentary Internet on American Airlines flights on Friday. The promotion coincided with the introduction of the 2010 Lexus LS line.

We're happy to take what we can get from our benificent corporate masters.
Posted by DownWithTyranny at 5:36 AM 3 comments:

Is Yemen A Safe Place To Visit-- Or Live? 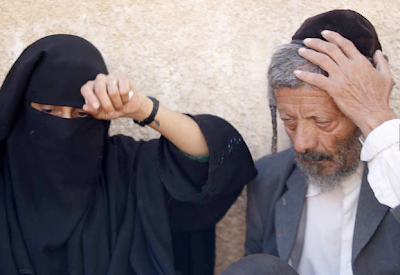 The drive from Sanga in Mali's Dogan country to Timbuktu is not for the faint of heart-- and not even possible without a solid 4 wheel drive, off road vehicle. When we did it a couple years ago, we got lost in trackless wastes-- with an experienced guide-- and broke down several times. But half way between driving over boulders in Dogan and the rutted track through the Sahara there's a stretch of paved road around a town called Douentza. There's not much to the town at all, but there's a roadside cafe where truckers and travelers can stop for a plate of slop and a cold drink and a chance to stretch and possibly realign one's spine. Ahhh... good old Douentza. I decided to fast but Roland had some kind of spaghetti lunch that took an hour or so to prepare. While waiting we met a Spanish architect, his wife and two daughters going in the other direction. We swapped road tips. And, as travelers do, we also swapped travel stories. They'd been traveling the world's forgotten places as long as I had. I told them about Afghanistan and Ceylon. They told us about Ethiopia and Yemen.

Yemen, in fact, was their greatest adventure. It was before the daughters had been born and the two Spanish students had been kidnapped by Yemenite bandits. It was strictly a business affair, no brutality or violence or anything like that. They were treated as guests and a month or so after being detained the ransom was paid and they were released... with the story of a lifetime.

Saturday night, for no particular reason, I tweeted a NY Times story by Robert Worth on how the Yemeni addiction to qat (khat)-- a very thirsty plant that is mildly narcotic-- is making the barely habitable country completely uninhabitable due to the depletion of the aquifers. It's a story of desolation and ruin... and danger. It still isn't a safe place for tourists to visit. On the other hand, it isn't a safe place for anyone, including the Yemenis.

The first time I ever really thought much about Yemenis was when I was general manager of Sire Records. Legendary music man, Seymour Stein, had signed an Israeli-Yemenite single, Ofra Haza (one of her songs is below) and told me how big she was in Europe, how much he loved her and hated her manager and asked me to try to break her in the U.S. We put out several albums and singles by Ofra and she had some success but, while she may have been "the Madonna for the Middle East," her music was more popular in gay dance clubs than on Top 40 radio. I always thought it odd, though, that when I visited Arab countries-- especially Morocco and Egypt-- people were wildly enthusiastic about her. No one minded that she was Israeli, let alone Jewish.

With album titles like Yemenite Songs, Yemenite Love, and Desert Love and with songs "Im Nin' Alu," "Galbi", and "Daw Da Hiya" it would be hard for all but the most casual of listeners to not wonder about the relationship between Israel, Jews and Yemen, an ostensibly hostile, backward, fundamentalist Arab country-- the place, in fact, Osama bin-Laden's family moved to Saudi Arabia from. Saturday's Wall Street Journal fills in some gaps about Yemen and Jews with a fascinating story, Secret Mission Rescues Yemen's Jews by Miriam Jordan. She confirms the country's backwardness and hostility and goes into the ongoing operation of how the Obama Administration is rescuing the few remaining Yemenite Jews and settling them suburban Rockland County, New York in the hamlet of Monsey. (Monsey has around 15,000 people, 112 synagogues and 45 yeshivas and less than half the people there speak English at home.)

The secret evacuation of the Yemeni Jews-- considered by historians to be one of the oldest of the Jewish diaspora communities-- is a sign of America's growing concern about this Arabian Peninsula land of 23 million.

The operation followed a year of mounting harassment, and was plotted with Jewish relief groups while Washington was signaling alarm about Yemen. In July, Gen. David Petraeus was dispatched to Yemen to encourage President Ali Abdullah Saleh to be more aggressive against al-Qaeda terrorists in the country. Last month, President Barack Obama wrote in a letter to President Saleh that Yemen's security is vital to the region and the U.S.

Yemen was overshadowed in recent years by bigger trouble spots such as Afghanistan. But it has re-emerged on Washington's radar as a potential source of regional instability and a haven for terrorists.

The impoverished nation is struggling with a Shiite revolt in the north, a secessionist movement in the south, and growing militancy among al-Qaeda sympathizers, raising concern about the government's ability to control its territory. Analysts believe al-Qaeda operatives are making alliances with local tribes that could enable it to establish a stronghold in Yemen, as it did in Afghanistan prior to the Sept. 11, 2001 attacks.

...Jews are believed to have reached what is now Yemen more than 2,500 years ago as traders for King Solomon. They survived-- and at times thrived-- over centuries of change, including the spread of Islam across the Arabian Peninsula.

"They were one of the oldest exiled groups out of Israel," says Hayim Tawil, a Yeshiva University professor who is an expert on Yemeni Jewry. "This is the end of the Jewish Diaspora of Yemen. That's it."

Centuries of near total isolation make Yemeni Jews a living link with the ancient world.

Many can recite passages of the Torah by heart and read Hebrew, but can't read their native tongue of Arabic. They live in stone houses, often without running water or electricity. One Yemeni woman showed up at the airport expecting to board her flight with a live chicken.

Through the centuries, the Jews earned a living as merchants, craftsmen and silversmiths known for designing djanbias, traditional daggers that only Muslims are allowed to carry. Jewish musical compositions became part of Yemeni culture, played at Muslim weddings and festivals.

"Yemeni Jews have always been a part of Yemeni society and have lived side by side in peace with their Muslim brothers and sisters," said a spokeswoman for the Embassy of Yemen in Washington.
In 1947, on the eve of the birth of the state of Israel, protests in the port city of Aden resulted in the death of dozens of Jews and the destruction of their homes and shops. In 1949 and 1950 about 49,000 people-- the majority of Yemen's Jewish community-- were airlifted to Israel in "Operation Magic Carpet."

About 2,000 Jews stayed in Yemen. Some trickled out until 1962, when civil war erupted. After that, they were stuck there. "For three decades, there were no telephone calls, no letters, no traveling overseas. The fact there were Jews in Yemen was barely known outside Israel," says Prof. Tawil.

After alienating the West by backing Iraq during the first Gulf War, Yemen sought a rapprochement with Washington. In 1991, it declared freedom of travel for Jews. An effort led by Prof. Tawil and brokered by the U.S. government culminated in the departure of about 1,200 Jews, mainly to Israel, in the early 1990s. Arthur Hughes, American ambassador to Yemen at the time, recalls that those who chose to remain insisted: "This is where we have been for centuries, we are okay; we're not going anywhere."

The few hundred Jews who stayed behind were concentrated in two enclaves: Saada, a remote area in Yemen's northern highlands, and Raida to the south.

In 2004, unrest erupted in Saada. The government says at least 50,000 people have been displaced by fighting between its troops and the Houthis, a Shiite rebel group.

Animosity against Jews intensified. Notes nailed to the homes of Jews accused them of working for Israel and corrupting Muslim morals. "Jews were specifically targeted by Houthi rebels," says a spokeswoman for the Yemeni embassy in Washington.

In January 2007, Houthi leaders threatened Jewish families in Saada. "We warn you to leave the area immediately... [W]e give you a period of 10 days, or you will regret it," read a letter signed by a Houthi representative cited in a Reuters article. 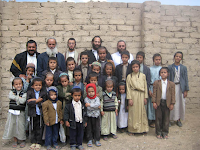 Virtually the entire Jewish community in the area, about 60 people, fled to the capital. Since then, they have been receiving food stipends and cash assistance from the government while living in state-owned apartments in a guarded enclave, says the Yemeni embassy in Washington... Raida became the last redoubt of Yemeni Jews, who continued to lead a simple life there alongside Muslims.

Ancient stone homes dot the town. Electricity is erratic; oil lamps are common. Water arrives via truck. Most homes lack a TV or a refrigerator. The cell phone is the only common modern device. Some families receive financial aid from Hasidic Jewish groups in Brooklyn and London, which has enabled them to buy cars.

Typically, the Jewish men are blacksmiths, shoe repairmen or carpenters. They sometimes barter, trading milk and cow dung for grass to feed their livestock. In public, the men stand out for their long side curls, customarily worn by observant Jewish men. Jewish women, who often marry by 16, rarely leave home. When they do, like Muslim women, only their eyes are exposed.

For fun, children play with pebbles and chase family chickens around the house. At Jewish religious schools, they sit at wooden tables to study Torah and Hebrew. They aren't taught subjects like science, or to read and write in Arabic, Yemen's official language.

Here's an original Ofra Haza version of "Im Nin' Alu," although the remix may sound more familiar to you.


UPDATE: Cruise Missiles Could Be Nonsectarian

With the Saudi air force and U.S. cruise missiles sending remote terror into the northern part of the country, there's another good reason to consider postponing that long dreamed about trip to Yemen you've been planning. And, of course, there's always the up-close-and-personal non-remote terror, of a homegrown variety to worry about.
Posted by DownWithTyranny at 7:43 AM 1 comment: