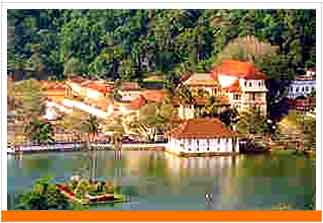 To be honest, I not a big beach person. I'm afraid of sharks, not a huge sunburn fan and I've read so much about sewage being dumped into the oceans, that I tend to prefer a nice saltwater (non-chlorine) swimming pool. HOWEVER, I do make some exceptions-- and the beaches of Sri Lanka (and Phuket) are way high up on that list of exceptions. But after a week or so of relaxing on the south coast beaches of Sri Lanka, we were ready for the cultural heartland. Sri Lanka is a tropical country; it's always hot. We were there in December/January and that's probably slightly cooler-- though not noticeably so-- but it is in the midst of the West and East coasts' dry season. The hill country is always a bit cooler, very pleasantly so and a bit wetter.

I was eager to get to Kandy because I had such fond memories of the place from 1970. But our first stop was Nuwara Eliya in the beautiful, hilly tea-growing area. Basically it is green, green, green-- lush and gorgeous-- kind of manicured jungle-- and you're up in the clouds. We stayed at a grand old colonial hotel, St. Andrew's, which had the ambiance of a lodge or a gentleman's club. The service was impeccable-- and never uptight; just right. And whoever was preparing the food, obviously cared about pleasing, even titillating, the people being fed. And the place was embarrassingly inexpensive, probably because it is so off the beaten path. A little further off the path I saw an ayurvedic "day spa" and decided to avail myself of its services. What a treat; again, the prices were astoundingly low and the service... well, it couldn't possibly be any better. If I was as much of a naturalist health freak then as I am now, I probably would have stayed for a few days. But we pushed on to Kandy.

Kandy is in the center of the island and about 1600 feet above sea level. The setting is beautiful and the vibe is pretty laid back. It was the capital of the country before the Brits took over early in the 19th century and was and is the cultural capital of the Sri Lankans, or at least of the Sinhalese. We stayed at an old (and perhaps once grand) hotel called The Suisse Hotel across the lake, more of less, from the Temple of the Tooth. The hotel was delightful in a charmingly run-down sort of way. I remember big, stately public rooms and wide, shady, comfortable verandahs. The individual accommodations were nothing to write home about except to say that it was so inexpensive that it was mind-boggling. And the food was excellent; they were serious about the service. If you're fussy and anal this might not be the hotel for you-- but in 1997 there probably wasn't a hotel in Kandy for you. I don't know if they've put up a Best Western or Hilton in now, although I would doubt it. With virtually no business and no beach, wealthy Westerners probably aren't as drawn to Kandy as they should be. We didn't do much of anything except live the Kandy life as much as we could, meeting people, hanging around the Temple of the Tooth, that kind of thing. (Steve is on his way to start his new job at Shambhala in Colorado today-- driving across the U.S.-- and I just called him on his cell and asked him what he remembers of our trip, 10 years ago, to Kandy and the Lankan cultural triangle. He didn't remember a lot more than I did but he says we were the only tourists in town. He had a great run-in with an elephant near the Temple of the Tooth and Roland claims to have a copy and I'll try to post it if I can.)

After a 3 relaxing, blissful days in mellow, languid, very friendly, very Buddhist Kandy, we headed north to where all the ancient sites are. Somehow we wound up driving down a windy, bumpy dirt road in the middle of nowhere that brought us to our hotel in Dambulla, the Kandalama. This is the kind of place people must helicopter in to and just have their whole holiday in the hotel. It's a "green hotel," meaning at one with the natural environment. And it was sort of carved into the cliffs of a mountain, overlooking a spectacular lake/wildlife preserve. All three of us remember having showers and looking out a floor to ceiling window that overlooked the lake and watching the elephants shower themselves while the monkeys watching us showering ourselves. There is nothing like the Kandalama in Sri Lanka. We kept asking ourselves how it had gotten there. It was incredibly modern and beautiful and pretty much the opposite of funky. The memory of the infinity pool that looked down on the lake was something that I have never gotten out of my mind.

Dambulla and nearby Sigirya were the places we visited from the Kandalama; I remember a lot of climbing around in the hot sun. Dambulla have this huge incredible ancient cave with so many Buddha images it made my head spin. It was really beautiful and well worth the strenuous schlepp up the mountain. Nearby Sigirya is this big flat-topped rock that was transformed into an impregnable fortress over a thousand years ago. What you see now is the ruins of a gigantic citadel. One day isn't enough time, nor is only one day in slightly more further afield Polannaruwa, another place with really impressive ruins. Our last day in the cultural triangle, and the furthest north we ventured in Sri Lanka was Anuradhapura, the largest and the oldest of the ancient towns. And, at least when we were there, the most dangerous. It wasn't crocs or sharks or snakes this time, but Tamil rebels we had to fear. In fact I don't remember much about Anuradhapura because of how uptight all the security was. It was really the only time we were in Sri Lanka-- other than when we passed the wreck of a recently blown-up building in Colombo-- that we could feel we were in the midst of a civil war. I remember visiting the scared bodhi tree and some monk telling us that in the very spot where we were doing some prayers some Tamil rebels has shot and killed a bunch of pilgrims a few days before. I think we saw some remnants of blood. And then we decided to go to Thailand.

We stopped at Negombo first. After the glorious wonders of the southern beaches, this village north of Colombo was a big turn off. It was filled with package tour holidayers from Europe and there wasn't really much charming about it. The hotel sucked. When we went back to Colombo to catch the plane to Thailand we stayed at the big modern hotel, the Hilton. It was pretty luxurious compared to what we had gotten used to-- and still just around $100 for a double. The airport security was a nightmare, but not all that different from what security has turned into in the U.S. lately-- but, of course, they were in a real war, not a war on terror invented by Karl Rove to prop up George Bush's calamitous presidency and to excuse his illegal excesses.
Posted by DownWithTyranny at 12:39 PM