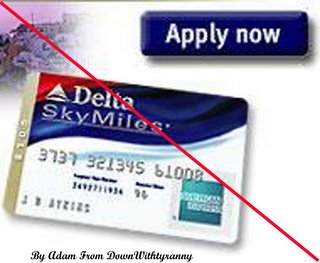 After my previous post about what an airborne cesspool Delta has become, Ken wrote a comment that I've heard voiced by many. It's about the whole frequent flyer conundrum, particularly the hope to be able to cash in with a big trip someday. Because I worked as president of a large company and traveled all over for years (in frequent flyer miles-producing first class), both domestically and internationally, I've acquired over a million miles-- and with all the carriers. And the bad news: Delta miles are the closest to worthless of any.

The Independent Traveler has done 2 interesting articles on how useless frequent flyer miles can be. "'I've had a Delta credit card for 10 years, and have never once been able to use the miles to travel,' says Misa Greenwood, who flies approximately once a month. 'They tell me I need to book six months in advance, or that a Saturday night stay is required, or that there are no seats left.' Even for upgrades, Greenwood has been stymied. 'I bought a ticket online, then called Delta to inquire about an upgrade,' she recalls. 'They told me the ticket was not eligible for an upgrade. No free flights, no upgrades; what's the point?'"

I've spent hours and hours and hours on the phone trying to book off-the-beaten path vacations with my Delta Miles. (Damn you, American Express!). I mean look at this blog; I'll go anywhere. And, more often than not-- like by a margin of 10 to 1 or 20 to 1 or more, there is nothing available. And I always plan months and months in advance; and, being retired and without a care in the world, I'm flexible as can be. Once I was on with a Delta agent for at least 2 hours trying to book a vacation-- total flexibility for leaving and returning and a wide number of places I'd be willing to go: Europe (anywhere), India, Thailand, Senegal. Frustrated and exasperated I finally just said to Ms. Robot on the other end of the line, "OK, I'll go anywhere, any class, any time in January or February for approximately one month. Any city. What's available?" Nothing was available.

So, Ken, Helen, everyone else... don't count on a big Delta SkyMiles score. One radio talk show host who does travel talk once said that over 85% of Delta requests are turned down and that although Delta was the worst, the other big U.S. airlines were nearly as bad. Take a look at Consumer Affairs if you're brave enough to hear the bad news about Delta's SkyMiles program. The stories are pretty miserable and when you experience them in real time, they're worse than miserable. And they are standard Delta fare. Flyer Talk ran an interesting piece on the 2005 "evolution" of Delta's SkyMiles program entitled "Are Delta's Frequent Flyer Changes Their Death Knell?"


The most recent Zagat's Guide airline surveyjust came out and it does not paint a pretty picture. The bullet points: "Ratings and Reviews Worst Since Survey Began in 1990; Mid-size and International Carriers Fare Best With Traveling Public; Continental Best Among Disappointing Major U.S. Carriers, JetBlue Up and Coming." They call it "an industry in steep decline" and point out that the U.S. airlines' "relations with customers are so poor, they're fortunate that passengers have few other places to turn."

Perhaps you'd like to see the Full Text of Class-Action Complaint Filed Against Delta class action suit passengers took out against Delta? Even if all the legalese makes your eyes glaze over, the constant stream of Delta flyers' complaints that you can find online always gives the best taste of what you can expect from these not very friendly skies.
Posted by DownWithTyranny at 10:22 PM

After years of faithful service and over 488306 miles I awoke to find I had none.

I remember the last time I flew with Delta I was very uncomfortable because of the poor service. Actually, they did not allow me to take generic viagra in the plane.

I think this Airline is one of the best ones, actually they have inside of the airplanes a xlpharmacy in order to buy all the medicines we need at the moment, I didn't know that they offered that service.