IS DELTA THE WORST U.S. AIRLINE ? 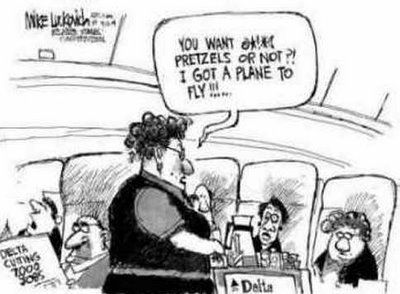 Today started well enough. Instead of having to wait for a Delta service rep to get on the line in the normal 30-40 minutes, a friendly human was on within 5 minutes. I was so happy. Well, that was 90 minutes ago. I'm on hold now, still waiting for my problem to be addressed. I won't bore you with the details because the problem really is Delta, not the details of this particular glitch. Delta-- not unlike most of the big U.S. airlines, and not unlike most of corporate America-- is populated by people who are driven by the corporate imperative: profit-über-alles. The corollary, alas, is screw customer service and even safety. Like I said, this seems to fit all the big U.S. airlines. Delta just seems a little worse than the rest.

Sometimes I wonder why Delta is worse than the already excruciatingly bad United or the egregiously horrid American or the woefully foul... etc. Maybe it's because their employees are under so much stress because they are being screwed so miserably by the corporate executives who have wrecked a once perfectly fine airline that I used to actually look forward to flying on-- instead of dreading.

So why bother flying on Delta if I dread it so much? Excellent question-- and of course, there really is no good answer. I have managed to collect many thousands or their nearly worthless and unusable Sky Miles over the years (thanks, American Express; can't you find a reputable airline partner to work with?) And on this particular flight to Spain I decided to try to use some mileage up before the whole company gets flushed down the toilet (as they should). Of course they wouldn't consider ever letting me use the miles for an actual ticket but they did offer to let me use miles for a "first class" upgrade if I bought (a very expensive) ticket. So I did and they did.

First class, LAX to Atlanta. I remember what first class used to be-- even on Delta! This "first class" doesn't even have a foot rest! I mean forget about normal first class amenities that real airlines have or things like seats that go all the way back or actual trained personnel. But even before I got to my crappy and uncomfortable seat, I had to vainly try to use the closet. When the first class passengers board a Delta flight, the crew finds the most forbidding and vicious-looking employee they can to stand in front of the closet and dare you to just try to hang something in it. In the past 3-4 years I've noticed that Delta-- and only Delta-- uses all the hanging space for crew members' bags. This is a major inconvenience if you're traveling with a suit that you would prefer to not have to press when you land. I've written at least half a dozen complaint letters to Delta about this and I've never had any kind of an answer. Once I was on some no-name local airline in India, possibly called Sahara or something unlikely like that, and not only did the crew use up all the closet space, but also all the restroom space. I kid you not-- the front-of-the-plane restroom was unusable because it was filled with big boxes of electronics the crew members were... transporting. Delta hasn't fallen that low... yet.

The second half of my trip-- Atlanta to Madrid-- was slightly better but, please take my word on this: if you woud rate British Air's front of the plane service an "A," as I certainly do, it would be impossible to rate Delta any more than a "D" in comparison-- and I'm being very generous there. Delta's transatlantic front of the plane (I shudder to remember, but I think they called it "Business Elite") service has more-- far more-- in common with a Greyhound trip than it does with the service one can safely expect from almost any European carrier-- and they even make American and United look good! If the flight attendants went to school at all, it was to learn how to piss off the customers. The closets, of course, were verboten for passengers. The food was... excruciatingly bad-- as were the seats. It did, however, almost land on time.

Do you know anyone who likes flying on Delta? I don't. Everyone I know hates it. And there was a time when Delta was the airline of choice inside the U.S. Perhaps if they just thought a little about treating their stressed out employees right and then got a grasp on what actual customer service means, they wouldn't be in bankruptcy today.
Posted by DownWithTyranny at 4:46 PM

Since just about the only flying I do these days is between NY and Florida to visit my elderly mother, Delta is relatively convenient for me, but even from my humble back-of-the-plane vantage point, boy, have I seen that decline in service you're talking about. It used to be a pleasure to deal with Delta people; now there aren't even any Delta people to deal with. And as you note, the remaining personnel do seem to be functioning under incredible pressure and stress. There is effectively no longer such a thing as "customer service."

Oh yes: Of course one reason I continue to schedule Delta flights where possible is to keep my mileage "current" and maybe add a few miles to my account. But I shudder to think what would happen if I ever try actually to use any of those miles.

I have found your blog. I really like your perspective on complaint letter writing. As I was doing my research, I have also found a great resource for online complaints: Complaint Letters. I think you will find it very interesting and resourceful

I think that Delta Airline is so good I've travel many times and now I can say that they offer a perfect Viagra Canada service inside the planes.