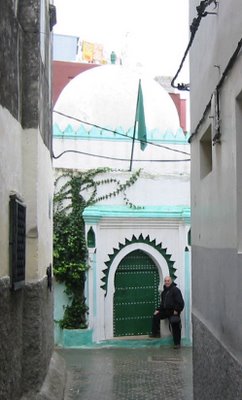 I'm finally finished unpacking and guess what I found! 3 pages of notes that I took when I decided to start this blog while I was in Tangier. Well, it's not the first post like I planned on it being, but, hopefully you'll get an idea where I'm coming from and an idea about Tangier too. The day before I started thinking about a blog, Roland and I were wandering around the Tangier medina and kasbah. It was my 10th trip to Morocco, probably my 6th or 7th to Tangier and I didn't recognize much-- a flicker or a glimmer here, a flicker there. And not because it's all changed or something; the memory ain't what it used to be (even though I take this great holistic memory stuff my friend Lou recommended, Juvenon.) Anyway, Roland has a great memory and he navigated us up hills and through passageways. "Don't you remember this (mega hill)"? he demanded.

"Uh... no. Are you sure we went this way last time?" He was-- and we had. (Eventually I recalled; it just takes longer these days.) The hill leads right up into the Place du Kasbah, the place where the kasbah begins with the police station and my friend Absalaam's  little cafe (which I've only seen open exactly one time. It was closed.) Now how the hell are we gonna find Absalaam's house? Roland was undaunted. He even remembered the awesome ancient door. We both had a memory of a small, pastel mosque Matisse had painted a block from Absalaam's. (That's it with me in the photo.)

The first time I came to Tangier it was 1969. I had heard lurid things about the city-- it had a bad reputation back then, a holdover from the International City days-- and I avoided it on the way in by entering via an Algeciras ferry to Ceuta, the bit of Spain that is still left in Morocco. Dull, sleepy place, but we headed south from there and by-passed Tangier. A month later, we did enter the city of sin on the way back to Spain. It didn't impress me but I didn't give it a chance. It wasn't for years that I grew to really like Tangier. But not remembering much is what gave me the idea for starting the blog. I told Roland and he loved the idea-- and he never thinks anything is a good idea.

Allow me a quick detour from Tangier-- as though this really were the first piece in a brand new blog (instead of the seventh in a 5 day old blog)-- and I'll give you a few details about my traveler background. I hit the road for the first time in the mid-60s when I was just a kid. I think I had just turned 15 when I hitchhiked from Brooklyn to Miami Beach to visit my grandparents for Easter-- or tried to hitchhike. I got picked up by the New Jersey Highway Patrol and they made my pissed off father come and pick me up at the police station. In Bumfuck, NJ (which was like Georgia or Virginia as far as I was concerned). I figured I was gonna get a beating but instead he or my mom gave me the busfare to go down to Miami in style the next day; maybe even the same day. I lost my virginity behind the Jacksonville Greyhound terminal. I don't remember much-- a lot of black: big black tires, big black face... and I kind of blacked out when I um... you know (this isn't a porn site, so we'll leave it at that). She was so sweet and cool and friendly and I was such a nerd. I don't know if she told me her name. If I had this blog then, I'd know now.

I only spent 2 nights in Tangier this time. The ferry was like 6 hours late but we were lucky because it hadn't crossed in 3 days because of stormy weather. It only took 90 minutes once we left Algeciras. I always used to love the gradual approach from Europe to Africa, the sights, the sounds, the smells, the feeling of excitement. I didn't really feel it this time. It was drizzly and overcast. We stayed at the place I always stay there, the only decent place, the El Minzah Hotel. Some Scottish aristocrat got it going in 1930, Lord Bute. It's actually gotten quite a bit better since the last time I was there. There's even a business center on the second floor with 2 super-fast Dells ($5/hour, which is really expensive for Morocco but I didn't know that yet). It's a 5-star hotel in a country where stars are very relative; the hotel owner is probably married to a relative of the Minister of Stars. But it is the best hotel in Tangier, which is, after all, a slowly improving but still shabby port at the Northwest tip of Africa, a place of intrigue and desperation where people from Africa (all over the world, actually) come to try to smuggle themselves into Spain and the EU, where the streets are paved in gold (relatively). Some people say it reminds them of Tijuana. I'm sure it seems to some like the whole continent of Africa would like to come in order to cross over to the good life in Europe. And it's a place where the livers of that good life can cross over and have a quick look-see how the other 90% of the world lives. Someone once told me most visitors to Morocco just come for a day and never get beyond Tangier. That's a shame.

The concierge at the El Minzah told me that almost all their guests stay for one night. There hadn't been any for 3 days because of the ferry. Tangier's not really a destination any more-- at least not for more than a night-- which must be frustrating for the people running the hotel, although they seem to be trying to make the best of it. There's still an underlying seediness about it that you won't find in a real 5-star hotel but at least I don't think they'd steal a $100 travellers check left in the safe behind the reception (the way they did about 20 years ago when I stayed there once). Now they don't even have a safe behind the reception-- and I don't bother with travelers checks anymore anyway. I feel confident enough now, after almost 4 decades of travel, to keep my cash in the pockets of my relatively tight jeans.

A couple months ago when I tried booking our room on the net, the hotel was anything but receptive. Not only did my correspondent have no interest in agreeing on a decent discount, he also said we would have to participate in an extravagant Christmas Eve dinner if we booked a room. I pointed out that Expedia.com was offering much cheaper rates and he claimed they don't honor Expedia's bookings. The El Minzah, 5 stars and all, ain't much, but the drop down to the next level hotel is a far drop indeed. I booked through Expedia-- 1,125 dirhams (like $120) for a double room, breakfast included. They honored the booking and the price.

The pleasant surprise in Tangier was the restaurant scene. It's one of the few cities where there is a Moroccan middle class accustomed to going out to eat enough to support real restaurants that don't just cater to tourists. Tourist restaurants are always horrible-- bland, over-priced, pathetic... all decor and show and never anyone striving for excellence in the kitchen. The guide books all claim that the El Korsan in the El Minzah is the best restaurant in town. It's exactly the kind of place I do my best to avoid. We managed to find two really excellent restaurants we ate in. One was somewhat touristy, but reasonable and definitely oriented towards ala carte ordering, rather than forcing you into a gigantic feast, Raihani's. A little further from the tourist area we found a fish restaurant which catered 100% to Moroccans, the Andalus. It was so delicious-- real salt of the earth kind of place, very friendly and unpretentious and ridiculously cheap. Harira for 5 dirhams, not 60 or 80, for example. Hmmm... I'm drooling just thinking about the fish tagine I had!
Posted by DownWithTyranny at 8:36 PM

You are lucky that you have a chance to travel to Morocco so often. I was there only once, but I saw a lot of cities, among which I liked Tangier the most. Tangier is beautiful, combining many of the best attributes of other Moroccan cities. In addition, it has a much more varied architecture, with a variety of European influences. Tangier is very close to Spain, with frequent ferries which take under an hour. That's why Morocco location near this city is an upcoming Tangier property district enjoying a huge injection of funds further enhancing its desireability and infrastructure.