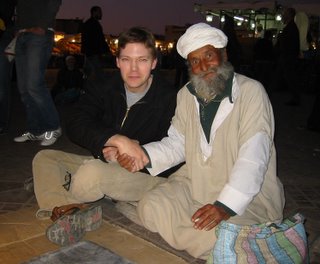 I've probably thought about this more than most. Starting back when I was 13-- and attempting to hitchhike down to Miami Beach to visit my grandparents for Easter (they called it Pessach)-- I've been taking to the road alone. A few years after that, I hitched from New York to California to stow away on a boat so I could go live on Tonga. (I never made it past L.A.'s San Pedro harbor.) And then a few years later I drove to India by myself, spending around 2 years traveling through Turkey, Iran, Afghanistan, Pakistan, India, Sri Lanka and Nepal.

First off, you're never really alone that much. I mean when you're hitching, there's a driver and he's picking you up because he wants to talk to someone. And when I was driving through Europe and Asia I always had a crew of people to help me pay for gas and all. And, best of all, traveling alone more or less forces you to meet people, one of the greatest joys of travel.

More recently I've done a lot of more conventional traveling with friends like Roland or Craig. In 2005 I rented a villa on Bali and invited 3 of my friends, Rebecca, Brad and Craig to join me. And last month Roland and I went to Spain and Morocco. Roland is a great travel buddy and travel is probably the bondingest thing between us. We've been all over the world together: London, Paris, Rome, of course, as well as more off the beaten tracks kind of destinations like Calcutta, Kandy, Chiang Mai, Abu Simbel, Cappadocia, Corleone (on Sicily), the Mekong Delta... and, all over Morocco, not just Tangier and Marrakech, but to places like Sidi Ifni, Tiznit, Taroudant, Zagora and on into the Sahara (by camel). The traveling alone thing came up when I saw him off after almost 3 weeks at the Essaouira bus station. He was headed for Casablanca, London and his job back in L.A. and I had a few days on my own.

The first time I was in Morocco was 1969 and I went with my girlfriend Martha. We had been in college together and each of us was very much a full-fledged individual. Each could say or do whatever we wanted without the other feeling that he or she was being defined. Suddenly when we were on the road I was not an individual but one half of an entity called "Howie + Martha." Oh, did I not like that! I had graduated and she had another year left. I drove her up to England; we went to the Isle of Wight Festival, heard Dylan sing "I Threw It All Away" (which I was very conscious-- in a fatalistic and melancholy way-- I was doing) and then she flew home and I drove to India, no longer a fraction of anything.

Back to Roland. I'm sure I'll never find a better travel companion. He loves adventure, is practically fearless, likes poking around off any beaten path, eats foods not many red-blooded Americans would ever consider (sober)... all that kind of stuff. After his bus took off in Essaouira-- a city I've loved since I was there at the same time as Jimi Hendrix in '69-- I started walking back to my hotel and thought, "well, now I'm alone. Is that good?" It sure was!

Even when you travel with the greatest traveling companion (like Roland), you always have to make all these little compromises. He hates the sun, for example. I love the sun. But if a mediocre restaurant is closer (less sun) and an awesome restaurant is further, meaning walking in the sun, he always wants to eat in the mediocre one. Laugh... but that happened in Essaouira. We both love Chez Sam's, certainly long the best restaurant in town, way at the end of the docks, as picturesque as you'll get and delicious food. But just a little bit closer is a restaurant that is not mediocre in fact but excruciating-- Le Coquillage. It exists only to service the one-day bus trippers who come to poke around Essaouira from Marrakech or, worse, Agadir. The service is abysmal and the food is... well, like food anywhere if no one is worried about repeat customers. But it meant less walking in the sun. (The third seafood restaurant on the beach, the Chalet de la Plage, also a fave of both of us, was already closed but that one is almost as good as Chez Sam-- and highly recommended, although not for lunch when the bus tours are around.) Anyway, pardon the tangent. The point was that sometimes you just don't feel like compromising all the time, or even taking someone else into consideration. And since Roland dislikes people almost as much as he dislikes the sun... and yours truly LOVES meeting people on the road...

So, anyway, he's gone and the first thing I do is go right to the hotel I always used to stay at, Hotel des Iles. (We had decided to stay someplace else this time and I found what looked like a charming place on the internet, a "riad" called Lalla Mira, which claims to be a kind of health-food hotel. It tuned out to be a pretty gross tenement kind of joint and I moved out the next morning, to the sterile luxurious Sofitel Thalassa Mogador, the kind of character-deficient place I usually avoid. But, after a night at the Lalla Mira I wanted something clean and comfy and a little upscale and Mohammed behind the desk made me a GREAT deal-- really great-- whereas the even fancier hotel in town, the Heure Bleue Palais, was inordinately expensive and unwilling to offer a discount.) The reason I walked over to the Hotel des Iles was because Roland and I hadn't been able to find an old friend of mine who had a shop. The problem was that there had been only one street with shops in that part of town 10 years ago and now there were a dozen. Street after street had been turned into pretty identical shopping streets. Roland usually remembers how to find things but he had noreal interest in helping me find my friend anyway. But once he was gone, I just decided to retrace my steps-- from 10 years previous-- starting at the door of the Hotel des Iles. I turned off my brain and let my feet take me there. It worked. He has two kids now and lots of ideas as usual-- from an olive and argun oil museum to a line of handmade Berber handbags for women. Fun to see him again and catch up a little. And once I found his shop I was able to orient myself and find all the places I always liked most in Essaouira. More about that anon.
Posted by DownWithTyranny at 7:25 PM

This is fucking awesome, Howie. I love reading it.