Delta Airlines-- Still The Worst Carrier In The Skies... But Even More So 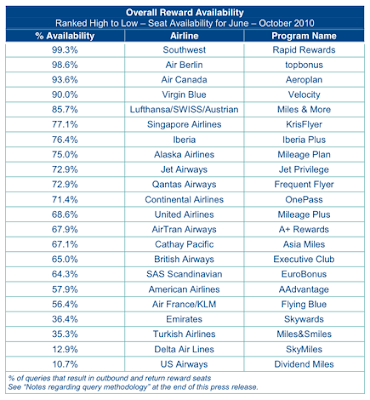 Delta has been the #1 worst U.S. airline every year in a row since the founding of this blog-- and that's just based on their service. Turns out, though, there's more to Delta's unsuitability as a reliable travel partner than how badly the management runs their operations. As yesterday's Wall Street Journal pointed out, the airline is a bastion of right-wing anti-worker extremism. No wonder their employees always seem so down in the dumps and resentful! The National Mediation Board is now investigating charges by flight attendants that Delta, the only non-Union U.S. airline, illegally interfered in unionization elections by pressuring employees to vote against the unions. As Joe Sudbay observed at AmericaBlog yesterday, "Delta is like the Scott Walker of airlines. It wants to be known as anti-worker."

We can probably expect even more skullduggery from Delta in the coming weeks as they double down in their anti-union jihad. They've been a lead driver in pushing Republican extremists in the House to rescind fair election rules for air/rail workers for elections conducted under the National Mediation Board. For progressives who care about keeping elections fair, giving workers the choice whether or not they want to join a union, and supporting companies who operate under basic standards of decency, there are a number of reasons for progressives to be outraged about Delta Airlines:

•  Open advocacy against fair American elections:  Delta issued a press release commending the news that Darrell Issa's deranged Committee on Oversight and Government Reform will investigate the NMB’s 2010 decision to conduct union elections for air/rail workers the same as all other types of American elections. Mike Campbell, Delta’s executive vice president of H.R. and Labor Relations said, "This investigation is an important victory for Delta people because it will finally allow the facts to speak for themselves.” Unfortunately for Delta, the facts aren’t on their side-- there’s no reason to conduct NMB elections differently from every other form of election, union or non-union, in the nation. If congressional and Senate elections were conducted under such rules, in which non-participating eligible voters were counted as having voted, then zero Members of Congress would have won their last election.

• Bumping paying customers…so Delta employees can lobby:  Delta is so committed to its anti-union ideology that it offered its employees the chance to travel to Washington to lobby against fair union elections under a provision that may bump paying customers. Talking Points Memo reported that the group No Way AFA, “a coalition of Delta employees who want to deliberalize union rights,” came to Washington the week of the House vote on the FAA Reauthorization bill to lobby against fair election standards... and potentially bumping paying Delta customers in the process. According to the article, “A Delta spokesperson said No Way AFA operates separately from the company itself, but that the company "allow[s] employees to travel positive space to D.C. when supporting legislative efforts that the company supports.”  According to TPM, this means that “the "positive space" fly-in could squeeze out seating space for regular travelers.”

• Free upgrades and lining the pockets of policymaker friends:  An investigative journalism piece in Georgia recently found that leading Republican lawmakers in Georgia’s state legislature received free upgrades from Delta to platinum status, valued at approximately $10,000 to $15,000 per year. Valued as campaign contributions, the piece noted that Delta low-balled the reported value of the platinum upgrades in state ethics records. Unsurprisingly, Delta has a long history of being generous to lawmakers like Rep. John Mica, who have voted the right way in Delta’s eyes by seeking to return NMB union elections to the old, undemocratic rules.

I've long been going out of my way to look for alternatives to flying on Delta just because of the lousy service and their refusal to let people use frequent flier miles, but now I can see there are even more reasons to avoid the worst airline in the skies.

Hard to use anything else if you live near DTW. We use Southwest whenever we can and Amex miles, but often we're just stuck.

I'm a frequent european traveller, this is my first time with Delta and with any luck my last. Conneccting flight out od Atlanta to Alexandria 2hour delay. Flight from Alexandria to Atlanta for the return trip again annouced a 2hours delay, so could not make my connecting flight to Paris. This is day two of my forced stay in Alexandria trying to get home thanks to Delta.

Notice to Any and ALL European Travellers Fly Delta at your Peril!

I've been flying Delta for years. I'm a frequent flyer and I find Delta to be the best of the big three. United used to be the worst bu lately American has overtaken them in the crappy service and equipment category. And their flight crew is nothing but a bunch of grumpy old hags. I'll stick with Delta any chance I get.

I'm so glad I came upon this post. Delta has shown me that lightning can definitely strike twice. They cancelled my flight, while sitting in the plane (real nice) on my way out to Portland Maine.

But get this, they also cancelled my flight on my way back home again....once again, while sitting in the plane.

The gate agents were of little help and so was customer service. They gave me erroneous information and offered no compensation whatsoever. I was travelling with a 3-year old at the time. It was awful having to make a 3-year-old wait in an airport for our next flight many hours later.

Delta ruined my entire trip and I will never fly with them again.

People, for pities sake please avoid this airline unless you want you vacation almost completely ruined. We need to put Delta out of business so they can no longer get away with the things they do to people. Cancelled our(me, my wife, 8 year old son and 5 year old daughter) 7 oclock flight from new york to orlando (Disney vacation, we thought we would have most of the day at one of the parks, arriving at the hotel around 11:30am, so we paid to get into a park that day.) Needless to say Delta put us on a flight to ohio, told us that we would catch a connecting flight out of there to Orlando. When we arrived there the other flight had all ready left. The events to follow are too long and painful to write down now, what i will tell you is that 14 hours later we got to Orlando, completely drained and exhausted and way too late to even think about going to a park. There was absolutely no sympathy, compassion, or ,compensation from Delta. Then, our flight home, that was supposed to be 7pm so we could have to whole last day to relax a little, CANCELLED!! Delta most graciously put us on a 2pm flight so we could scramble around to pack and get to the airport. Needless to say, we will never never ever fly Delta airlines again. HEED MY WARNING! DO NOT FLY DELTA AIRLINE! THE WORST IVE EVER FLOWN!!!

Delta is the worst airline in the skies. If I can't find another flight, I'll drive. The truth is not in them, they cannot be trusted or believed. Customer satisfaction means nothing to them, only the bottom line

If you want to use your frequent flier rewards the amount has increased:
From Delta site
Responsibility for Taxes, Fees and Other Charges
The payment of any taxes, fees, and other government or airport-imposed charges is the
responsibility of the passenger. Applicable taxes/fees/charges may include a $3.80 Federal
Excise Tax, Passenger Facility Charge(s) of up to $4.50, or the September 11th Security Fee of
up to $2.50 for each flight segment. A flight segment is defined as a takeoff and a landing.
Award Travel tickets to/from Hawaii/Alaska do not include U.S. International Air Transportation
Tax of up to $16.80 round-trip. Award Travel tickets for international travel, including for travel
to/from PR/U.S. Virgin Islands, do not include U.S. International Air Transportation Tax of up to
$33.40 round-trip and U.S. and foreign user, inspection, security or other similarly based
charges, fees or taxes of up to $349, depending on itinerary. Taxes and fees for Award Travel
must be paid at the time the ticket is booked. Taxes and fees for Award Travel are nonrefundable
for Award Tickets canceled after the original flight departure time. In some instances,
the government may elect to collect the fees directly from the passenger. Some airline partners
charge a fee for Award Travel redemptions for travel on their airlines. These fees, when
applicable, are the responsibility of the passenger and will be collected at the time of booking.

We just got shafted.

Thanks for sharing such a good article with us. Contact Delta Airlines Reservations Number to speak with a representative about a new or existing reservation.