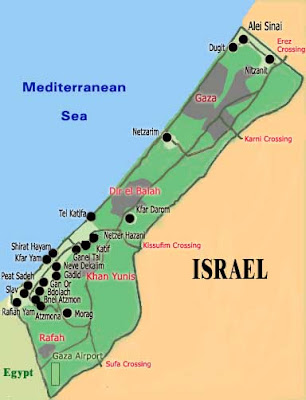 No, not me. I try to avoid, at least in theory, places with active armed struggles. My old pal, author Reese Erlich, is the opposite. He goes from one conflict zone to another. The last we heard from him, he was in Egypt, and before that in Cuba and Afghanistan. Gaza isn't exactly a tourist destination. But it's a historical and Biblical place and it can easily be on the route from history-rich Egypt to history-rich Israel... and Palestine. And as Reese told me, Gaza has a lot of potential for tourism, even if that needs to wait for political stability. "It's located along prime Mediterranean seafront. The local folks have enjoyed the sea, beaches and weather for many years. There's even a 5-star hotel built along the seashore, but not opened do to economic problems in Gaza."

There is no foreign tourism in Gaza at the moment because of the Israeli economic blockade. The Israelis restrict foreign travelers to journalists, aid workers, etc. The Egyptians don't allow general tourist traffic either.

The Hamas government is trying to promote what they call "internal" tourism, which means getting Gazans out of their houses and traveling to thebeaches, to parks, etc. The recreational area on the land formally occupied by Gush Katif is an example of internal tourism. It's as much a morale booster as an economic factor. So like everything else in Gaza, real tourism will have to wait until there's an overall political settlement.

Reese was in Gaza recently reporting for the Pulitzer Center on Crisis Reporting. And it wasn't his first time in one of the world's most troubled areas:

In 2004, I reported from an Israeli settlement in the southern part of Gaza called Gush Katif. The ultra-conservative religious settlers living there told me Gaza was part of historic Israel, and they would never leave. Less than a year later, the Israeli government withdrew from Gaza and forced the settlers out.

A few days ago, I went back to visit the land that was once Gush Katif. The results were pleasantly surprising given my general disagreements with Gaza’s governing party, Hamas.

Back in 2004, I arrived in Gaza on a special road reserved for Israeli settlers and off limits to Palestinians. Gush Katif and other settlements dissected Gaza with settler-only roads. Palestinians couldn’t drive along the coastal highway. Military checkpoints dotted the alternative north-south road. Some days Palestinians got through the checkpoints, and other days they didn’t.

My trip to Gush Katif illustrated why the Israeli settlements are such a critical issue. It’s not just a question of settlers living on Palestinian land and commuting to Israel. The settlements require settler-only access roads, checkpoints and a constant military presence. Under those conditions, Palestinians can’t have sovereignty over their own country. They can’t even drive freely between two neighboring cities.

Since the unilateral withdrawal of Israel from Gaza in August 2005, the checkpoints and settlements disappeared. The coastal road is open. We turned onto a dirt road and there was the former Gush Katif. The city hall, schools and houses were gone. The Israeli military destroyed most of the buildings before departure. Palestinian scavengers walked away with the remaining cement blocks, rebar and other construction materials.

A few buildings still stand, along with the scaffoldings of former hothouses. “We had to rebuild everything,” says Mohammad Thuraya, director of Asda City, which now occupies the land.

In the park, families picnic, a water slide dumps screaming children into a huge swimming pool and a clown jumps around to the kids’ delight.

Outside the park, the Hamas government leased land to local farmers. Saleh Moshen has planted apple trees in the mixture of sand and clay that passes for soil in this part of the world. Within a stone’s throw of the former Gush Katif hothouses, he has several hundred trees.

“I don’t expect to make a profit right away,” he told me. “You need a few years for apple trees to be productive.”

The settlers used to export flowers and vegetables to Europe. Palestinians in other parts of Gaza also exported to Europe until 2006 when Hamas won the Palestinian Authority elections, and Israel imposed economic sanctions on Gaza.

The Israeli pressure eased somewhat after May 31, 2010, when a flotilla of passenger boats from Turkey tried to bring supplies to Gaza. During the Israeli boarding of one vessel, nine people were killed and many injured.

The resulting international outcry forced Israel to modify its policies. Today, cement and construction materials can be imported, but only for previously approved UN projects. More food can be imported, and even a few new cars. Palestinian-grown flowers and strawberries can be exported, but in very limited quantities.

Allaa El-Rafati, Gaza’s Minister of National Economy, told me Israel’s policies still hurt ordinary Palestinians. Truck traffic between Israel and Gaza is only about 25 percent of what existed before 2005. “We’re particularly short of medicines and medical equipment,” he said.

Ordinary Palestinians would like to see an end to Israel’s sanctions and a return to normal life, but aren’t expecting that anytime soon.