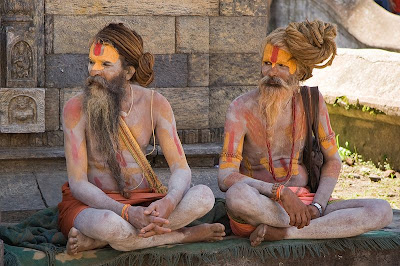 I was especially glad I've been taking my Rhodiola Force 300, which purports to help you feel more energetic and improve your mood, mental alertness, memory, and physical endurance but was recommended to me by an L.A. herbologist as something to help with altitude sickness. It's derived from Rhodiola rosea or Rose Root, an exalted herbal stress “adaptogen.” It thrives in high altitudes and in nature’s most challenging climates and is supposed to enhance concentration and endurance and support optimal immune, adrenal and cardiovascular function under conditions of severe stress. It's advertised as being "widely used by Russian athletes and cosmonauts to increase energy, Rhodiola delivers the promise of an inner oasis of peace and energy in our hurly-burly world... Those phytonutrients include numerous and unique anti-stress compounds like rosavins, salidrosides and other biologically active compounds." I spent yesterday trekking in the Himalayan foothills at around 8,000 feet. And I felt great, even in the rain. We were wandering around, looking down at the clouds, in knee-high rubber boots, sure we were protecting from the leeches. That was why we came to Nepal. That and... well this very accurate description by Frommer's that updates my own first memories of the place from a far more tranquil (and less "developed") 1971:

Kathmandu. The very name conjures up images of snow-covered peaks, snake charmers and mountaineers, holy men and sacred cows. Perhaps no other city on earth has seemed so mysterious. This city, capital of the Himalayan kingdom of Nepal, lies in a wide valley hidden behind a wall of nearly impenetrable mountains. Today, winging into Kathmandu on an international flight, the Mahabhaharat Range slides by below as the Himalayas shimmer in the distance. The jumbled landscape doesn't give the appearance that it could ever provide a level surface large enough to land a Boeing or Airbus. Then, as the peaks below grow uncomfortably close to the belly of the plane, mountainsides give way to gentler slopes and terraced hillsides, which are dun-colored in the post-monsoon months favored by trekkers. Brick houses dot the fields of a seemingly idyllic rural setting. Suddenly the city comes into view-- uniformly brown and low-rise, it sprawls across the valley floor. There's a quick glimpse of a huge white hemisphere in the distance, and suddenly the plane is on the runway. The passengers breathe a communal sigh of relief for having safely landed amid the Himalayan peaks. The excitement is palpable as passengers wait to deplane. Through the door lies Kathmandu, city of mystery, the most exotic city in Asia.

However, as feet hit tarmac, the reality of modern-day Kathmandu immediately comes to bear. The arrivals hall is a zoo and no one seems to know what to do. Guards want to inspect your bags as you leave the arrivals hall. Outside, hordes of taxi drivers, porters, and hotel touts block the exit door. Beyond the airport gates, the streets are chaotic at best. Clouds of blue-black smoke billow from diesel trucks, buses packed like sardine cans stop in the middle of the road, cows wander aimlessly, and horns blare incessantly. The smoke of funeral pyres mingles with the stench of garbage. Women in colorful saris dash out of the way of your careening taxi as it bounces upon potholes large enough to swallow a car. 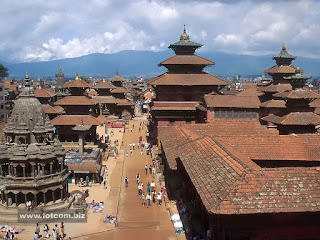 However, once you have settled into your hotel, you can venture out onto the streets of old Kathmandu, where a different picture slowly begins to emerge. Kathmandu is a city of alleyways leading into the unknown, a city where roadside shrines are sprinkled with marigold petals and aging temples double as produce markets. Strange odors--a melange of incense, cow dung, and rotting garbage-- drift through the streets. Eerie discordant music-- the tinny jangling of cymbals, the drone of a harmonium, the pulse of drums-- might fill a nearly deserted square at nightfall as musicians sit hunched over their ancient instruments on the floor of a tiny temple. In the market, vendors swaddled in woolen shawls sit behind baskets full of mandarins and radishes. Kathmandu has been called a medieval city, and it is hard not to think of it as such as you wander its back streets. The lanes are narrow, and in the oldest parts of town, there is little traffic (though the few cars and motorcycles that venture into these ancient alleys make frequent use of their horns). People do the heavy work here, not vehicles. They carry heavy-laden baskets on their backs or slung from poles across their shoulders. Perhaps time has not completely stood still in Kathmandu, but it certainly has not passed as swiftly as it has in other parts of the world.

For more than a hundred years Kathmandu was cut off from the outside world by a government that wished to keep the country isolated. When the royal family was restored to power in the mid-1950s, Nepal opened its borders and the painful process of entering the 20th century began. Today, Kathmandu has much of the Western world's technology, but alas, many of its environmental and social woes as well. There are cars and computers, fax machines and factories, cellular phones and satellite TV. There are also traffic congestion and smog, deforestation and unemployment. However, with the help of the West, Nepal is working to overcome these problems. Kathmandu is certainly no Shangri-la, but it is one of the world's most fascinating cities, nonetheless.

Last year we saw how Nepal had moved so far as to legalize same-sex marriage after the people dumped the monarchy, like anywhere a bastion of conservatism, and embarked on a new progressive path. Well, we're not here to get married and it probably wouldn't have even crossed my mind except when I was in our hotel's business center I tried to access a post Ken wrote at DWT about the politics of same-sex marriage in the New York State Senate, a place not nearly as advanced as Nepal. There's nothing "sexy," let alone prurient about the post. But it was auto-blocked on the public internet. (I can access it in my room over the same wireless system.)

There's a Communist primer minister, a Maoist revolutionary opposition and one of the world's most vibrant revolutionary atmospheres in Nepal now. But there are also second-thoughts about the legalization of same-sex marriage, now three years old.

Gay rights activists are alarmed by a new bill that could become law soon if approved by parliament as part of the government's bid to modernise the legal code-- Muluki Ain, or law of the land-- formulated in 1854 first.

The law and justice ministry, in consultation with judges, has completed the drafts of a new criminal code and a civil code of law, which were submitted in parliament recently after being approved by the council of ministers. ... The marriage clauses in the new codes define the union as only that between a man and a woman, treating homosexual unions as "unnatural sex offenses."

"The proposed civil and criminal laws contain provisions to re-criminalise so-called 'unnatural sexual offenses'," [said Manisha Dhakal, a transgender and senior member of the Blue Diamond Society, Nepal's pioneering gay rights organisation]. "These attempts by the law ministry are a clear sign not to follow international human rights standards, a clear intention not to implement the Supreme Court's decision and also go against the spirit of the interim and new draft constitution of Nepal."

In November 2008, Nepal's Supreme Court recognised homosexuals as a "natural people" and asked the government to ensure that they received the same rights and considerations as any other citizen. In the landmark judgment, the court also ordered the government to enact laws to allow same-sex marriages.

...Since 2008, Nepal has established itself as a gay rights haven with people flocking to the Himalayan nation for same sex unions.

In the past, couples from India and Britain have tied the knot in Nepal and during the monsoon, the Blue Diamond Society has planned a public wedding between a lesbian couple from the US.

The weddings are part of the community's effort to draw gay tourists to Nepal and have been welcomed by Nepal's tourism ministry, which is celebrating 2011 as Nepal Tourism Year with the target of bringing in one million air-borne visitors.

On my way to Nepal, I stopped over for a couple days in Hong Kong, one of the world's most modern cities. In many ways it's more modern, at least superficially, than any city in the U.S. But not in a gay way. There was a big to-do over the city-state, a semi-autonomous part of China, hiring a "gay conversion expert" to "cure" government employees.

Hong Kong has hired a prominent local psychiatrist who claims he can "re-wire" homosexuals as a trainer for its social welfare staff, sparking outrage among gay rights activists on Friday.

Critics said the move could be the world's first government-sponsored training session on gay conversion therapy, which includes prayer, cold showers and practising abstinence as a way to avoid same-sex relationships.

"The government seems to think that homosexuals are possessed by evil spirits and needed to be 'cleansed' or 'cured' through conversion therapy," Joseph Cho, a spokesman for gay rights group Rainbow Action, told reporters during a protest outside the city's Social Welfare Department Friday.

A government survey in the 1990s concluded that most Hong Kong residents were "not ready" for laws banning discrimination against homosexuals, and the city had made little headway since to protect gays, said Dora Choi, director of the Gender Studies Committee at the Chinese University of Hong Kong.

"(But) this is very bizarre that the government would sponsor classes like these," she told AFP.

"It is the first time the government has publicly taken a stance on this issue. (It) should be neutral but it is obviously taking sides," she added.

Maybe both these countries are ready to write off gay tourists and eager to invite evangelicals instead. Good luck with that!


UPDATE: This url is blocked here!

I guess "same sex marriage" triggers an auto-blocking mechanism. But this one isn't just blocked in public areas but in my own room! I feel like I'm back in Myanmar!
Posted by DownWithTyranny at 8:00 AM