Urban Gadabout: To the end of the island (Staten) -- I'm headed back to Tottenville (weather permitting) 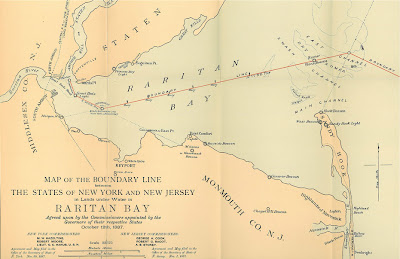 If you look out onto the water from Conference House Park in Tottenville, at the southern tip of Staten Island, you can imagine you're looking onto the open Atlantic Ocean, but off to the east skinny Sandy Hook juts northward from the Monmouth County shoreline, forming the eastern boundary of Raritan Bay. (For a larger view, click on the map.)

If you don't have anything planned tomorrow between noon and 5pm, plus whatever travel time it would take you to get to Tottenville, at the southern tip of State Island, why not hie on down for the Second Annual Raritan Bay Festival? 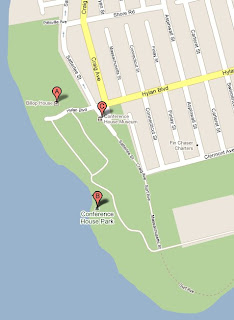 It's going to be quite a schlepp for me from the northern reaches of Manhattan -- upwards of three hours if I do it the cheap way, by subway to South Ferry, Staten Island Ferry to St. George, the full length of the Staten Island Railway to Tottenville, then a 15-minute walk to the Conference House Park Visitors Center at Hyland Boulevard and Satterlee Street. I can cut a chunk of time off if instead I catch the X-1 express bus from Lower Manhattan across the Verrazanno Narrows Bridge, connecting with the S78 bus on Hylan Boulevard virtually to within a block of the Visitors Center, but I have to be prepared to spend the $5.50 express-bus fare.

THE "CONFERENCE" IN THE CONFERENCE HOUSE 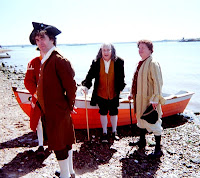 A conference took place there on Sept. 11, 1776, in the hope of resolving the unpleasantness (you may have heard of it -- the American Revolutionary War) between the newly-declared-independent Americans and their erstwhile colonial masters, the British. The Americans were represented by Benjamin Franklin, John Adams, and Edward Rutledge; the British, by their military commander in America, Admiral Lord Richard Howe, who was then occupying the house of Col. Christopher Billopp, which had been built in 1680 by his grandfather, British naval Capt. Christopher Billopp. (That's a reenactment in the photo, not the original event!) The conference doesn't seem to have accomplished anything. After the war, the actively Tory Billopp family was stripped of its properties. 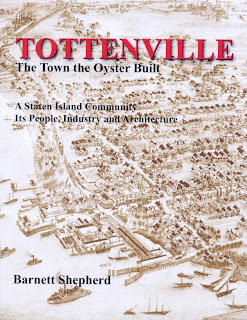 Actually, I'm kind of looking forward to doing the walk between the SIR station and Conference House Park in at least one direction, which will be retreading old ground, from a Municipal Art Society walking tour to Tottenville led by the inexhaustibly knowledgeable Justin Ferate, on which we actually got to the Pavilion in Conference House Park, and also in the course of our tour visited a stunning private home where we got to meet a special guest, the preeminent historian of State Island, Barnett Shepherd, author of the 2010-published Tottenville: The Town the Oyster Built, published by the Tottenville Historical Society. (To put it another way, or maybe more or less the same way, the town was built on, and prospered from, the rich harvest of oysters in surrounding waters in the 19th century, until pollution put an end to its oyster trade.) Barnett had had quite a schlepp himself -- from the other side of the island, we were told, on an island that developed as a plethora of separate communities, where it's frequently not so easy to get from there to here. 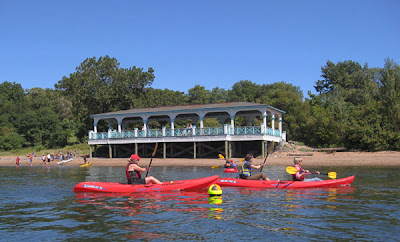 On the May MAS Tottenville walking tour we made it to the Pavilion in Conference House Park at the southern edge of Staten Island, with a view across the Arthur Kill (separating Staten Island and New Jersey) of Perth Amboy, NJ.

The one downside to that trip was the weather, which was mostly rotten. By the time we got to Conference House Park, the overcast and mist were so heavy that, while we could see across the Arthur Kill, which separates Staten Island from the North American mainland, to picturesque Perth Amboy, NJ, we couldn't see much else, and it wasn't exactly an ideal day for exploring the shorefront.

A ferry used to join Tottenville to Perth Amboy, nestled between the Arthur Kill and the Raritan River ("perhaps the major drainage channel along the ice front throughout the Wisconsin glaciation," according to Wikipedia) Now they're linked by the Outerbridge Crossing, whose name derives not from a geographical description, as most of us initially suppose, but from Staten Island resident Eugenius Harvey Outerbridge, the first chairman of the Port of New York Authority. It's called "crossing," it was explained to us, because how goofy would "Outerbridge Bridge" sound? There are decent views of the bridge from the Tottenville railway station, by the way. 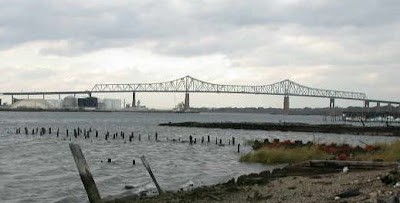 The Outerbridge Crossing over Arthur Kill, from Tottenville

For tomorrow the Conference House Park Conservancy is promising 45-minute shoreline walking tours (hourly, at 12:30, 1:30, 2:30, and 3:30) plus "local musicians on two stages, crafts, exhibitions from maritime organizations and historic societies, and plenty of entertainment for children, including a petting zoo and water rides."

Provided the weather cooperates, of course. I mean, I've already seen the view from the Conference House Park in crappy weather, and it's not worth six hours' combined travel time for that again! (At the moment, NY1.org is holding out: "Morning clouds/fog. Partly sunny in the afternoon. Spot thunderstorms." Uh-oh.) 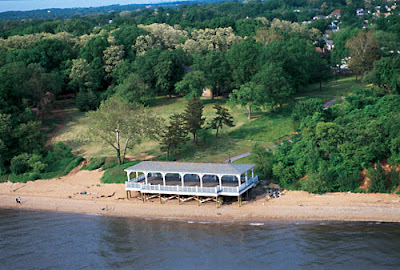 An aerial view of the Pavilion in Conference House Park
#
Posted by KenInNY at 6:00 PM