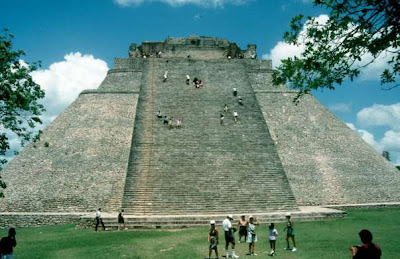 We love Mexico. I started going when I was a teenager and I've always found the country awesome and inspiring and beautiful. I love the food and the folks have been kind. Mexico City is a terrific, cosmopolitan megapolis, as is Guadalajara and villages I've been to like San Miguel de Allende have been stupendous. Right now Roland, Helen, Michael and I are trying to decide between Mérida on the Yucatán Peninsula or Oaxaca on the other side of the country for a winter getaway. (And, to make it a little more complicated, Roland threw in the picturesque old colonial city of Cuernevaca in the country's heartland.)

We found a beautiful house to rent in Mérida and I'm really leaning that way right now. All the tour books give the place a big thumbs up. It's filled with gardens and plazas that give it a relaxed, tropical atmosphere and it boasts the oldest cathedral on the continent, built between 1561 and 1598, with stone walls from the ruined buildings of Tihó, the former Mayan city. In fact Mérida is right in the middle of the old Mayan Empire and there are ruins to visit all around, including some really close ones like Dzibilchaltún, founded in 500 BC, just 9 miles away. It covers around 6 square miles and since being rediscovered in 1941 something like 8,000 buildings have been mapped. Still close enough for a day trip are the even more outstanding Mayan ruins at Uxmal, Tulum and Chichén Itzá.

Lately there have been safety concerns in Mexico. But not really in the Yucatán. Last month Mexican Tourism Secretary Gloria Guevara was in the U.S. trying to reassure American tourists-- and U.S. visitors make up 60% of Mexico's tourism visitors-- that, despite warnings from the State Department, most of the country is safe.

[W]e acknowledge there are some issues in some pockets, in some specific locations. To give you an example, Mexico has 2,500 counties. Eighty of those have issues. So does that mean that the entire country has issues? Of course not. Eighty of 2,500 is less than 5 percent. Ninety percent of Americans go to six destinations. The tourist destinations are very far from where we have these issues.

...For us in Mexico, when we talk about the U.S., we don’t say the U.S., we say Orlando, L.A., Washington. If something happened last week, if there was a shooting in East L.A., does that mean you can’t go to Washington? Of course not.