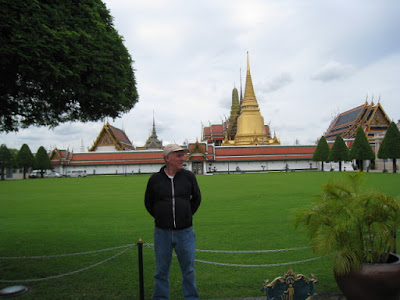 Anyone who's been following this blog has probably noticed that I'm a big fan of Thailand. I gave up counting how many times I've been there after a dozen. Whenever we go to Asia, we always try to spend some time in Bangkok on the way there or on the way back, like we just did on our trip to Nepal a couple months ago. The people, the food, the varied cultural offerings make Thailand one of the world's-- if not the world's-- best tourist destinations. So I'm sure I wasn't the only person alarmed at the headline in today's Guardian proclaiming the risk of Bangkok sinking into the sea. No doubt Pat Robertson or Michele Bachmann will soon by croaking that it's God's punishment for a pervasive climate of tolerance there-- though no one seems to be addressing God's decision to burn down Texas, despite big-tent prayer events led by the state shaman, Rick Perry. But no matter the craziness of American right-wing politics, the gloomiest assessments are that parts of Bangkok will be underwater by 2030.

Driving into town from the new airport, I'm always struck by the number of new highrises that are always going up in Bangkok-- all those huge cranes... more than I've ever seen in an American city. It's almost like China! But then there are parts of Thornburi on the other side of the river, way up beyond where the tourist hotels are, where life is entirely on the water. We love spending days in longtail boats cruising the canals and getting into the slow pace of life in these parts of the city-- even though it feels like you're in the countryside. Regardless of delusional Republican Party ideology and their bizarre self-destructive dogma, Thai's know why their capital city is sinking.

The population has greatly increased, with about 10 million people now living in the city and its suburbs. Even the weight of the skyscrapers, constantly on the rise in a conurbation in the throes of perpetual change, is contributing to Bangkok's gradual immersion. Much of the metropolis is now below sea level and the ground is subsiding by 1.5 to 5cm a year.

In the medium to long term more than 1m buildings, 90% of which are residential, are under threat from the rising sea level. In due course the ground floors of buildings could be awash with 10cm of water for part of the year, according to the Asian Institute of Technology.

In the port of Samunt Prakan, about 15 km downstream from the capital, the residents of detached houses along the river already spend several months a year up to their ankles in water.

Illegal tapping of groundwater is one of the causes of the capital's misfortunes, according to Jan Bojo, a World Bank expert based there. Not all the specialists endorse this view, but they do agree the situation is bound to deteriorate over the next few years. Smith Dharmasaroja, the head of the National Disaster Warning Centre, is predicting that by 2100 Bangkok will have become a new Atlantis. However gloomy this may seem, Dharmasaroja's forecasts are taken seriously. In the 1990s he predicted the fearful tsunami which devastated countries round the Indian Ocean in 2004.

Dharmasaroja maintains that "no decision has been taken" at government level "to stop the problem." And, he adds, if nothing is done Bangkok could be underwater by 2030.

One of the solutions he has suggested is to build a series of dykes along the coast of the Gulf of Thailand, a scheme which would cost well over $2bn. He says work should start immediately, otherwise it will be too late to halt the chain of events leading to disaster.

Anond Snidvongs, an oceanographer and specialist on climate-change impacts in southeast Asia, takes a more cautious line. "No one can predict how long it will take for Bangkok to be flooded and how this process will unfold," he says. He sees no point in building huge dykes. "The rise in sea level is not that great and climate change only plays a fairly small part-- about one-fifth-- in the current scenario," he adds.

"It's pointless," he stresses, "to try to protect the coastline which is being eroded by three to four centimetres a year. But there are plenty of other ways of combating flooding, such as better management of building land in the city."

Posted by DownWithTyranny at 12:00 PM

The post tells us quite a reasons why one should live in Bangkok and spend some quality time in this Thai spectacle. You better take a flight to Bangkok and head towards Thailand.