Travel Warnings Go Up For Mexico-- Should You Pay Attention? 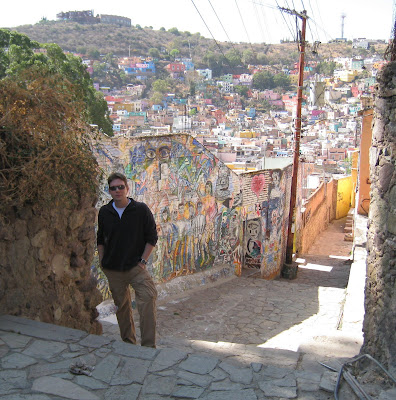 Roland on a Guanajuato backstreet
This evening the U.S. Government's Bureau of Alcohol, Tobacco, Firearms and Explosives issued a warning, specifically to young Americans looking for a good time in Mexico, to avoid Tijuana and Rosarito, just south of San Diego. With spring break coming up, college students traditionally flock to Mexico resort towns. The ATF thinks the drug-related violence should make them change their plans.

The bureau's Los Angeles field division said Monday that it discourages travel to Tijuana and Rosarito Beach, noting that both cities just south of San Diego have witnessed a lot of drug-fueled violence. Rosarito has long been a mecca for Southern California students on spring break.

The warning goes a step further than one issued by the State Department last month advising travelers to Mexico to avoid areas of prostitution and drug-dealing and to take other commonsense precautions.

I just got back from an awesome trip to San Miguel de Allende, where there's pretty much no violence, drug related or otherwise. It's as peaceful a town as you're likely to find anywhere. And not the kind of place I'd expect to see many spring break partyin' fools either. There are some pretty wild art galleries but... that's about as wild as it gets.

Seven months ago I was in Mexico City and that was pretty easygoing as well. I mean from what you read, Mexico sounds like the killing fields. Last week I did a post at DownWithTyranny about how catering to irrational gun worship in the U.S. has led to a dangerous deterioration of law and order south of the border. But over all, I found Mexico City just as safe as any other large city anywhere. If you're looking for trouble, you'll find it. If you're awake to the world around you, unless you run into some incredibly bad luck, you'll be fine. Same as in L.A. or Milan or Hong Kong.

Mexico has the 12th biggest economy in the world and the trade been the U.S. and Mexico-- the legal, non-drug, non-contraband weapons-- is almost a billion dollars a day. Our economic vitality and security is much more closely tied to Mexico than most Americans realize. And the drug cartel-related violence has a lot to do with this side of the border. The market for illegal drugs is here. And the heavy weapons that leaves the Mexican police unable to maintain law and order come from the U.S.

The Mexico Travel Board says the tourist destinations in Mexico are as safe as they've ever been and hotel occupancy rates were pretty strong in February: 73% in Cancun, 85% in the Riviera Maya, 78% in Puerto Vallarta.

Mexico remains a safe tourist destination and this is reflected in the 22.6 million international visitors that arrived in 2008, of which 18 million were Americans. This number represents a 5.9 percent increase from the previous year. Tourists who suffered any incidents were minimal.

The violence associated with drug trafficking is isolated in cities that are far away from tourism destinations. We suggest using common precautions as when traveling to any foreign country.

Q: Is Mexico an unsafe place to travel?

Mexico ranks tenth as an international travel destination in the world and is the number one international tourism destination for North Americans traveling abroad. Many tourists to the country are repeat visitors, which demonstrates that the vast majority of tourists are satisfied and leave with overwhelmingly positive impressions.

One other thing, the dollar/peso exchange rate was around one dollar for 10 pesos for many, many years. This year it went to 14 pesos for a dollar, making everything incredibly cheap(er) for tourists. And today it went over 15 pesos to the dollar!

Posted by DownWithTyranny at 6:32 PM

We Are Never Full said...

a good post. americans (and america) often bases many decisions on fear. this is no different. but, should everyone not travel to mexico (a gigantic, diverse country) b/c of fear of death? no. should americans take heed and not travel anywhere that feels unsafe? yes. should americans wear fanny packs, cameras around necks and signs that say "i am a tourist"? no!

i live in brooklyn and there is still a stigma about coming here (the freaking "real world" filmed here last year!) - many only think of jay-z, biggie, marcey projects and guns. people need to just learn to be good, respectful tourists and don't go somewhere you have any worry about. it will most definitely show through.