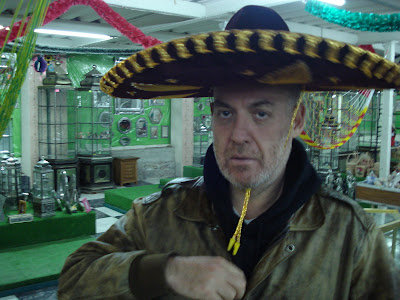 Who knew this weekend was going to be like 1848 all over again-- only in Bahrain, Libya, Wisconsin, Algeria, Ohio and Yemen? I just figured it would be another sleepy 3 day weekend and I could take the 3 hour Alaska Air flight direct from LAX to Guadalajara, Mexico's peaceful, sophisticated second biggest city (metro area population- 4.5 million, bigger than any U.S. city other than NYC).

It's a manufacturing town and a major cultural center, even above and beyond being the home of mariachi music. And there's incredible shopping in the suburb of Tlaquepaque. We were a little nervous about going because the drug wars seem to have arrived with a bang last week-- dozens of people were wounded or killed in a gun and grenade attack not far from our hotel. Turns out the drug wars aren't new to Guadalajara at all. In 1993 the Archbishop, Juan Jesús Posadas Ocampo, was murdered in his car-- 14 gunshot wounds-- at the airport by members of the San Diego Logan Heights Gang working for the Tijuana Cartel or the Carlos Salinas government; no one knows for sure.

I just found 300 pesos in my foreign currency jar from the last time I was in Mexico. That's great because it costs 220 pesos (fixed price, monopoly) to go from the airport to downtown. The roundtrip flight was $389. My plan is to live blog the whole trip on this page. Hasta mañana-- or luego. Here's the weather:

It was a pretty easy trip, nice and smooth. One lady across the aisle had a seizure and a real tarted up one behind her was reading the Sarah Palin book. If there's room in first class they let you upgrade for$50. There was and we did. Airport formalities were a snap, weather's balmy, taxis plentiful and the hotel-- Quinta Real-- as welcoming as last time we stayed here. Tlaquepaque mañana.

Since there was that grenade attack just a week ago I thought it would be prudent to check the news updates for Guadalajara and see what was up... gay beer was the first thing to show itself-- for people who think Corona and Michelob are too straight.

Minerva, a small brewery in Jalisco, Mexico, believes its "artisan honey-ales" will appeal to gay men and lesbians whose refined tastes have been put on the back burner by beer manufacturers.

...The brewery has two beers on offer: Salamandra and Purple Hand, which refers to the famous gay rights protest in San Francisco in 1969. Wyler says the drinks' labels can be removed and worn as a symbol of pride. (Gay or straight, is wearing a beer label on your sleeve ever a good idea?) 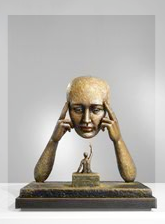 The hotel has nice hard comfortable beds and last night was the first time in months I slept past 6AM. The free breakfast buffet alone is worth the price of admission. There's almost nothing-- short of chop suey-- you could want to eat that isn't there. After eating too much, we spent the day wandering around Tlaquepaque, browsing in the very uncrowded shops and galleries. I wound up buying a sculpture (right) by Sergio Bustamante-- odd for me since I've been busy reverse-collecting (giving stuff away and speaking with museums about who gets what after I'm no longer among the quick). Anyway, they don't like bargaining in Tlaquepaque-- it's nothing like Morocco-- but if you're persistent you can get 10% off and if they feel you're serious and willing to pay cash, 15% is easy and needs no histrionics. We ate at one of the highly rated restaurants in town, Casa Fuerte, and the stuff we ordered was great but the salsa and chips that came free had no taste at all. Prices are good here for everything. The food was cheap and so were the taxis. Tonight we're going for a long walk from the hotel into downtown-- like 3 miles I estimate-- and we're going to try a vegetarian restaurant that's I remember from last time being real good: Zanahoria.

...And later that night. Zanahoria was closed so we went to the best place in town, Sacromonte, which we remembered from last time we were here. Actually Roland remembered it. I remember nada. We weren't that hungry so we had some delicious avocado apetizers and called it a night. People look very fit here-- except the kids. The kids are obese. In fact there's an obesity epidemic among Mexican children. Guess who's influence they're coming under? U.S. has the highest percentage of obese people in the world and now Mexico is numero dos.

Obesity is a disease that affects the United States, but it also has risen in Mexico, and a UH professor recently named as a Fulbright Scholar is helping to combat the disease in both countries.

Rebecca Lee, an assistant professor of nutrition and director of UH’s Texas Obesity Research Center, will soon take her expertise to Guadalajara, Mexico, to assist in further discovery of this disease.

...Research conducted during Lee’s time in Mexico will also aim to document and define obesity in a better fashion and determine possible environmental factors that contribute to a population’s obesity problem.

“Recent data suggest that the problem of obesity has emerged in Mexico, particularly among youth,” Lee said in the release.

While the US has the highest obesity rate worldwide, studies have cited Mexico as having the second highest, Lee said.

And we're off to Tonalá now-- a market suburb like Tlaquepaque that I had missed in the past.

Tonalá may not be as refined and high end but it's just as good as Tlaquepaque, espcially on market days, Sundays and Thursdays, when there are hundreds and hundreds of stalls selling stuff. Much of the stuff, in fact, that is sold in Tlaquepaque is made in Tonalá. After we got back we had dinner in the most highly recommended vegetarian restaurant, Zanahoria, which wasn't that far of a walk from our hotel. Nice folks run it and the food was ok, but it's vegetarian cooking circa 1970. The world has moved on-- way beyond. 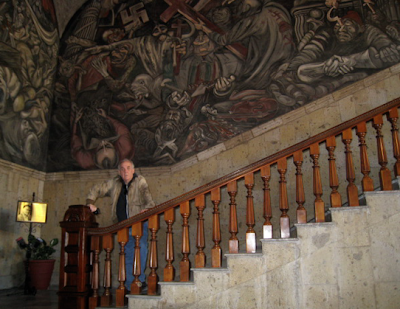 Our last night in town we ate in a restaurant I really want to suggest you don't miss if you're ever in Guadalajara. After spending a full day exploring the central historic core with it's spectacular cathedral and public buildings-- you see why the city is called "the Florence of Mexico"-- we made it to the most beautiful-looking restaurant we kept passing everyday, Cocina 88. The look of the place in a grand old mansion is inviting enough but the Peruvian food is about the best I've eaten in Guadalajara. I had cerviche and then a coconut-crushed mahi mahi that I can't stop thinking about.

Back to the historic core again for a minute, especially since it's what draws so many tourists, especially Mexican tourists, to Guadalajara. Dr Atl (Gerardo Murillo) was born in Guadalajara and is widely known as the father of modern Mexican muralism but the most outstanding mural in town comes from another Jalisco native, José Clemente Orozco. The Government Palace has some of his most incredible work and I'm posing (above) and Roland (below) in front of Man of Fire, the breathtaking depiction of early 1800s freedom fighter Father Miguel Hidalgo on the broad sweeping staircase going to the second floor. And on the third floor is a later mural in the state assembly, The People and Its Leaders. His work, of course, made us think about the struggle working men and women are going through this week in Egypt, Libya, Bahrain, Wisconsin, Ohio, Algeria, Yemen... 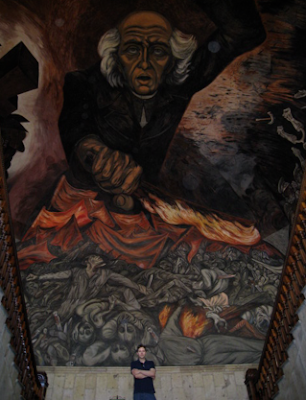 Posted by DownWithTyranny at 1:00 PM

This was interesting - I ran around Mexico once looking for the Bustamante gallery with my father trying to remember if doble a la isquierdo was right or left (left).

Nothing beats the camel picture, but you in a sombrero is muy bien!