Deadly Earthquake In Sikkim And Nepal

We are often speculating and ruminating about safety and dangers inherent in foreign travel. Somalia, Yemen and Nuevo Laredo are probably better left unvisited these days. Syria too. But how do you factor natural disasters like earthquakes into your travel plans. Today, for example, had you been walking by the British Embassy in Kathmandu, capital of Nepal, you might have been one of the 5 people killed by falling bricks when a disastrous earthquake struck on the Nepali-Sikkim border. Hundreds are injured and 18 are reported dead so far but the death total is expected to rise after the 6.8 magnitude quake.

Or you might have been walking along far from the quake, somewhere in northern India-- the whole region shook-- and been trampled by a panic-stricken mob... which is just what happened to a man in Bhagalpur in Bihar. And then there were the two persons were injured in Kathmandu's Central Jail when they tried to make their escape when the quake struck.

We were just in Nepal. The infrastructure-- like all of it-- is fragile and precarious... at best. And the quake rocked the whole country, which is historically marked by what various earthquakes have done in the past, but still totally unprepared for earthquakes from any perspective. Our favorite part of the trip-- aside from trekking in the mountains-- was our visit to Bhaktipur. Here's a photo from Bhaktipur I just found: 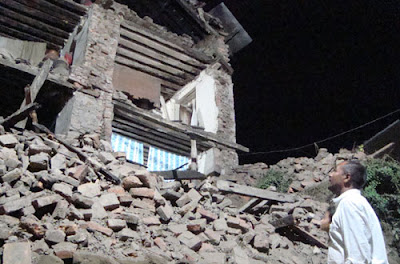 We'll update this post as more news comes in on the damage. Meanwhile, remember, disaster can strike almost anywhere. In March Kiplinger offered a list of the 10 American states most at risk of natural and unnatural disaster. It was done in terms of insurance risk but I guess you can take it into account when you make travel plans as well! Top on the list, predicatbly, are hurricane alley states, Louisiana, Florida, and Texas and #4 is New York (terrorist attacks), followed by-- back to hurricanes-- Mississippi. Now tornadoes and cyclones put Oklahoma at #6, tornadoes (no mention of domestic right-wing terrorism) and they close out with Alabama, California ("floods, earthquakes, landslides, tsunamis and strong Santa Ana winds that fuel wildfires"), Missouri, and Ohio ("more than 30 earthquakes between 2002 and 2007").

The death toll continues to rise and Monday morning there were 48 reported deaths throughout the region. Rescue operations are hampered by bad weather and impassable roads.

24 hours in and the latest death toll is 74 people in India, Nepal and Tibet. It's expected to continue rising as outside forces make their way to outlying regions.


UPDATE: Kathmandu Earthquake Risk Is Something To Take Into Consideration

I loved Kathmandu when I was there in 1971 and I was eager to go back. In the '90s it wasn't as good-- but which place ever is?-- but still fascinating enough for another trip. This summer I was back again-- and that was the last time. The pollution alone is enough to keep anyone sane away. And now scientists are warning that Kathmandu is "a high-risk city unprepared for the next 'Big One'."

Experts say Kathmandu is one of the most vulnerable cities in the world with an overdue earthquake predicted to kill tens of thousands of people and leave survivors cut off from international aid.

British geologist Dave Petley described the latest tremor, which killed eight people in Nepal, as a "wake-up call" for the overcrowded capital, home to two million people and connected to the outside world by just three roads and one airport runway.

...Nepal is a highly seismic region, lying above the collision of the Indian and Eurasian plates that created the Himalayas, and major earthquakes have hit the Kathmandu Valley every 75 years on average over recent centuries.

One quake destroyed a quarter of homes in Kathmandu 77 years ago, and geologists believe the area is at immediate risk of an 8.0-magnitude tremor-- ten times the size of last year's Haiti quake which killed more than 225,000 people.

Downtown Kathmandu is a maze of narrow, winding roads where rickshaws and cars jostle with cows to squeeze past dilapidated clay, brick and timber houses.

"The building stock is not seismically strengthened, suggesting that in a big earthquake there will be large numbers of building collapses," said Petley, of the Institute of Hazard, Risk and Resilience at Britain's Durham University.

GeoHazards International, a US-based research group, has measured the likely death toll from a quake of 6.0 magnitude or higher hitting cities in Asia and the Americas.
Kathmandu topped the list of 21 cities with 69,000 potential deaths, ahead of Istanbul and New Delhi.

The Kathmandu Valley has experienced rapid, uncontrolled urbanisation in the past few years and the lack of infrastructure and deep-rooted poverty leaves it desperately under-prepared for an earthquake, experts say.

Building codes are rarely enforced, few emergency drills are carried out, and the fact that Kathmandu lies on the site of a prehistoric lake filled with soft sediment also exacerbates the risk.

The one single-runway airport and all three access roads would likely be destroyed in a major quake, meaning the city could be stranded.

Posted by DownWithTyranny at 12:16 PM

Aw that is so sad! ): R.I.P victims of the earthquake and i hope those who are suffering can hold on..