The other day I mentioned how new travel vistas had been opening for me because of Lisa's feminine influence. This trip hasn't had much in common with the sojourn Roland and I took last year into the back country of Mali. On the other hand, Lisa's interest in some of Marrakesh's great sites aren't related to her gender. Roland just hates going into any museums, monuments or "sites." He just likes to live the life. I only insist when it's essential-- like the Prado in Madrid or the underground cities in Cappadocia. But this week I'm seeing everything-- all the monuments I've been passing by for decades without ever bothering to go in to see. And am I glad I'm getting a chance to. Like I mentioned last time, the Ben Youssuf Madrassa is something I passed by dozens of times and never went into. And it's spectacular and SO worth a stop. Yesterday there was another one like that we just stumbled on, El Bahia Palace, near the Mella, the old Jewish quarter:

The palace is gargantuan and kind of gaudy, built by a rich asshole to impress his buddies in the 1800s. It's like a Moroccan version of Versailles. According to wikipedia, "The structures tell a lot about the taste of the nouveau-riche of its time, and can appear vulgar to modern tastes. It was intended to become the greatest palace of its time, but it is really dominated by hasty planning as well as uninspired detail work. This doesn't make the palace less worth visiting, it is a monument of its time, and served even as the residence of the French resident general, [Resident-General Louis Hubert Gonzalve] Lyautey." 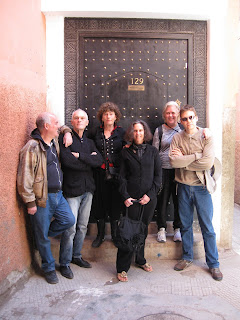 And then we headed into the Mella... well almost. Just before the gate to the Mella we found a gorgeous shop, Atelier El Bahia, again, something I would never have walked into. But Lisa saw the pillows, bedspreads, scarves, shawls, the huge looms... and in we went. Even I bought something! After wandering around in the souks all week we were happy to see displays of all top quality stuff. The prices were fixed-- strange for Morocco-- but not nearly as high as what they ask for for far shoddier goods in the souks. Address is 24 Rue des Dommaine, Bahia. And then into the Mella where we actually found the still functioning synogogue! The caretaker showed us around and it was far more alive than the synagogue I visited in Yangon, which never had as thriving a Jewish community as Marrakesh once did. Now, I hear there are about 250 Jews left in the Mella.

Afterwards it was back to Atelier El Bahia because Lisa remembered all those colorful pillow cases would be perfect for the ultimate Marrakesh red and black bedspread she had bought-- and then on to the Place des Ferblantlers, where craftsmen are making metal goods. Lisa immediately sensed out the best shop in the area, El Abdi Abdeljabbar's L'Art Marocain. He's got everything in there but the main thing are high end light fixtures, including some he bought at the auction when the Mamounia closed down for a couple years to renovate and sold everything. Lisa now has a piece of Mamounia history for her patio. 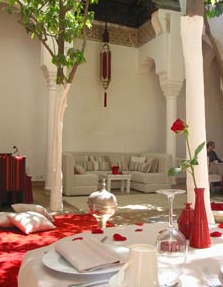 We ended the day by going for dinner at Dar Zellij, one of my favorite old Marrakesh dining palaces. One of the things I like best about Zellij is that they don't try to force you to order a huge feast like most of the Moroccan palace restaurants do. We satisfied ourselves with an 8-plate salad and fish tagines. No couscous course, no harira course, no pastilla course, no dessert. And this isn't a belly dancer kind of place. The food was great and the service impeccable. The place, a restored 17th century riad, is breathtaking. And the price was high but not outrageous, especially if you skip the fixed price dinners. And it's always great wandering around the Medina looking for places. God knows how many times we got lost. All part of the fun.
Posted by DownWithTyranny at 12:00 PM

We are happy that you have enjoyed your purchase from our shop, if you ever want another item just email us and we can send you pictures to choose from