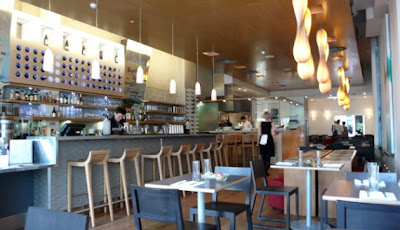 About a year and a half ago Sarah Bentley did a hopeful feature for TimeOut London about the British capital's nascent raw food scene. I just heard from one of L.A.'s most accomplished raw chefs via e-mail that everyone he knows who's gone to London complains that it's difficult to get good raw food. Well, I have good news: SAF in Shoreditch is really pretty excellent. And they opened a branch in Kensington (at the Whole Food Market; more about that below). Bentley:

London’s raw food scene is exploding. After decades of raw food diets provoking gasps of disbelief, it has eked into the city’s mainstream health food movement with a burgeoning network of restaurants, market stalls, delivery services, workshops and lifestyle events.

...Raw food or ‘live food’ dishes are made from produce – usually but not always unprocessed, organic and vegan – cooked at a temperature below 48C (warmer than body temperature, but still not even half way between frozen and boiling water). On raw food websites it is often referred to as ‘high vibrational food’, some theories suggesting that, being uncooked, ‘live’ foods have more enzymes and a higher nutrient content than cooked ‘dead’ foods.   Chad Sarno, culinary mastermind behind Saf, London’s most high-end raw food restaurant that opened in April 2008, says. ‘I find terms like “high vibrational” alienate people. Basically it’s food in its purest, freshest form, so of course it’s healthier and in my opinion tastier than cooked food.’ Though it should be noted that trained nutritionists are far more sceptical of the benefits of raw food diets – which studies show are associated with increased risk of osteoporosis.   The Saf menu includes dishes that sound impossible to create from raw ingredients: beetroot ravioli and Chinese pancakes share the line up with pad Thai and autumn risotto. At Dragonfly Wholefoods in Highgate the menu offers sumptuous falafel, pizza, sunflower burgers and onion bread available in all their uncooked glory.

...Many raw food enthusiasts make claims of improved health on switching to a raw food diet, but one benefit which is more palpable is weight loss – a strictly followed raw food diet is an almost guaranteed route to shedding pounds. Some feel it also has a massive impact on your general wellbeing. ‘When I went raw the change in me was hugely noticeable,’ says fan Liz Bugrave. ‘My energy levels increased, my skin was glowing, I was more flexible and I felt more at one with everything around me.’  Though it’s difficult to argue against the benefits, the practicalities of maintaining a raw diet are challenging, especially if you go 100 per cent raw. Converts are in a constant cycle of preparation, planning and, if travelling or visiting friends and family, packing ingredients to take with them. Then there are the cravings. It seems even the most dedicated raw fooders fall off the wagon and binge on cooked food en route to finding a take on raw that works for them.

Tonight we had our New Years Eve dinner at SAF at 152-154 Curtain Rd. What a treat! It's certainly on a par with Pure Food and Wine in NYC or Roxanne's old restaurant in Marin County. The food prep staff holds itself to a very high standard and every dish they turn out is breathtakingly scrumptious. Tonight they offered a mind-blowing 7 course meal for £70, just over $100. At first glance at the menu I was a little put off because I wanted to order a la cart and because champagne was included. But once the food started arriving, I never looked back. Actually, even before the food started arriving, I was happy since they offered to substitute any of their drinks for the alcohol. I had a cucumber, ginger, lemon juice drink-- there were other ingredients I can't remember-- called a Zinger that totally hit the spot.

-Consomé, which was cucumber juice with a delectable chipotle sorbet, wilted cucumber and sea lettuce caviar. Roland and I both rated it an A-- and we rated everything that came after an A as well, so I won't repeat the ratings.

-Terin, which was layers of spectacularly prepared beets with horse radish, the most delicious walnuts I ever tasted (pickled!) and a porto wine reduction.

-Coquette, which featured chestnut tartare, truffel alfredo and other components that escape me but that helped make this completely memorable as a dish.

-A Nut Roast, that was a kind of main course, I guess. It was a kind of a vegan meatloaf with a demi glace accompanied by broccoli, leek pure and a tomato confit.

-A Cheese course with macademia cheese that was infused with a red pepper cors with a slice of barley bread and some kind of strawberry jam.

-And the dessert: a Moonie Pie, which starred a smoked banana ice cream encased in a chocolate shell with a cacao nibs crust on a jasmin pear compote.

And the best news of all: they're talking with Whole Foods about opening TWENTY branches in the U.S., starting on the East Coast. That'll be a very healthy step forward for the raw food movement in the U.S. because most everyone will have to step up their game to compete.
Posted by DownWithTyranny at 1:59 PM

Pretty interesting article. Thanks for letting me know this good stuff!!! I always like to read your great blog site!!!!

EatEvolve is the first UK based pre made Paleo food delivery company Delicious and non processed, our meals are easy to

prepare and perfect for a busy city lifestyle.You will find your desired and healthy food here .Also you will experience a new and different