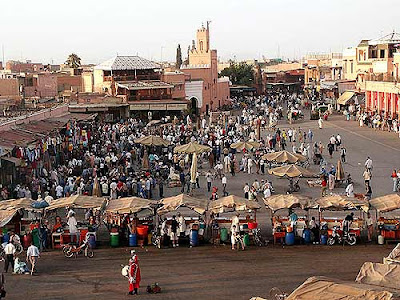 My old rule of thumb was that the trip starts once the airplane doors shut. But this one started back in May when we booked our tickets (L.A. to London on B.A., London to Marrakesh on Atlas Blue, which has since been fully absorbed by Royal Air Maroc, probably the worst airline servicewise on earth; try calling their 1-800 number a hundred times and see if you ever get through.) In May we also booked a 4 bedroom riad in the old city. I can't wait to see it. And I won't have to much longer. I'm leaving for the airport in about an hour.

I didn't do much to prepare for the trip beyond that stuff-- changed some dollars to Euros so I can pay the balance of the riad, since they prefer that currency rather than dollars or dirham. You don't need shots or visas for Morocco and I've been there over a dozen times so I didn't even get a guide book. And I went to K Mart and bought two pairs of new jeans for $9.97 each. They look awesome and the ones I had are fine for the U.S. but jeans with holes are looked at askance in Morocco. And I went to Nordstrom's outlet store and bought a bunch of really nice boxer-briefs and t-shirts. Last night I spent 2 whole hours sorting my vitamins and supplements into daily dose bags. But this morning I went for my last swim of 2010, my last jacuzzi of 2010 and my last hike in the Los Feliz hills of 2010. I also made sure that the socks I'm wearing for the flight don't have any holes in them. A friend told me that the TSA guys have stopped the junk groping for the holidays. I was kind of looking forward to it in a weird way... you know, to be at one with the zeitgeist or something.

Oh, and I checked the weather. It was in the low 80s every day last week. Here's today's:

UPDATE: All checked in

There were no porno scanner machines anywhere to be seen and no junk gropers. That was much ado about nothing, Some jerk made me take off my belt and hoodie though. Turns out, though, that the B.A. flights to London no longer land at Terminal 4. There's now a Terminal 5, although I'll have to get over to T-4 for the trip to Morocco... after a 7 hour layover. At check-in just now they gave me a brochure for the new T-5. Aside from all kinds of high end shops, like Paul Smith, Harrods, and Prada and a Gordon Ramsey restaurant, they have an amazing arrivals lounge, Galleries, that includes a movie theater, a spa, dining facilities where food is prepared by order and excellent business facilities. I can hardly wait. I just ate a Brazil nut that tasted like rotten fish.
Posted by DownWithTyranny at 11:39 AM