CAPPADOCIA-- BEST HOTEL, BEST RESTAURANT AND BEST SITES IN ALL OF TURKEY

Last week my friend Dave wrote a guest blog while he was staying at the Riyad el Cadi in Marrakesh, where Roland and I stayed last December. I was so happy that the proprietors made them feel welcome and treated them extra nice when they used my name. Whenever I find a really great place-- especially one a bit off-the-beaten track-- I love to recommend it to my friends. Then I'm always a little anxious about how they'll find it. (I mean you never want to be responsible for sending someone someplace that they hate, like when I told Ken and Tony about Bangkok and they called whining about what a dump the Oriental Hotel was.

The place I probably recommend the most-- and hopefully we'll soon see a guest blog from my pal Tim from there-- is the Esbelli in Cappadocia. I started traveling to Turkey in 1969 when I was driving to India. I was struck by the natural and manmade beauty of the country and by the friendliness and culture of the people. I lingered longer than I planned-- especially once I had figured out that Istanbul's Blue Mosque District was no more representative of Turkey than Times Square is representative of the U.S. And I keep going back. A real crossroads, Turkey is easy to tack on to other trips-- like to Greece, Italy, Egypt, Israel, Spain, anywhere in Eastern Europe... And I've been to just about every nook and cranny-- from the Black Sea Coast to Anatlya to the Aegean to Lake Van and all through the central Anatolian highlands. Cappadocia is relatively new for me. What a mistake I almost made! "Too touristy," I used to think. (I almost missed the Taj Mahal with the same stupid thoughts.)

In September 2004 we had spent some time in good old Istanbul-- one of my favorite cities in the world-- and I'll write about that another time. It's an hour flight from Istanbul to Kayseri. It was painless enough and cost around $75. Suha, the proprietor of Esbelli Evi had arranged for a pick-up at the airport for the 30 mile drive to Urgup. Urgup is an uninteresting town incredibly well-located in the midst of one of the most fascinating places on earth. And the hotel, just a short walk north of town is amazing. And hard to think of as a hotel. It's Suha and his mother's home, a conglomeration of homes carved into the soft tufa stone. It's partially above ground with terraces and stunning views and partially kind of cave-like. There are 10 guest rooms and some cozy, charming common rooms (with a computer or two and a library's worth of books) beautifully decorated with hardwood floors, local textiles. The best part is Suha's genuine old world hospitality; you feel like you're a guest in someone's very comfortable, very welcoming home. People get there and don't want to leave. He gave Roland and I an amazing and very large 2 bedroom suite and I think it was less than $100 a night and included a sumptuous breakfast. (A comparison: in Istanbul we stayed at the 4 Seasons, which had just been voted the Best Hotel in Europe. We loved it; but we loved the Esbelli more.) 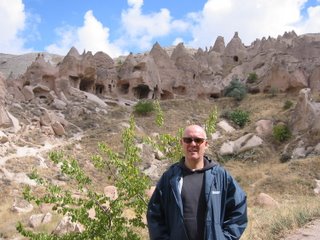 There aren't any special restaurants in Urgup but Suha turned us on to an old Greek farm in Mustafapasha (fka Sinassos), about 20 minutes south of Urgup, called, appropriately enough, the Old Greek House. It's a large family home with lots of rooms for guest to eat in. Let me just say that in the dozen times I've been to Turkey-- a country whose cuisine I absolutely love-- the Old Greek House served the best food I ever ate in the country. And we ate there almost every day. It is so off the beaten path that God only knows how anyone finds it. We drove around looking for quite a while before we found it down a dirt road. Suha had called ahead and ordered our food each time we ate there. Everything is prepared specially for the guests. This is beyond homemade and if you eat everything on your plate, they instantly fill the plate up again. We had course after course of the most delicious fresh food and I don't think it ever cost us $10 (for both of us!)

OK, so I told you about the most incredible hotel and the most wonderful restaurant, both pretty much in the middle of nowhere. Why would anyone go to Cappodocia? The 2 main reasons: history and geography and the way they interacted. You can feel you're in the Bible one minute and in a fairy land that beats anything Hollywood has ever created the next. People flip out the first time they see Cappadocia's "fairy chimneys," which are caps of hard rock on a cone-shaped shaft of the softer tufa stone. It looks like something you'd expect at Disneyland.

In every direction from Urgup we found unique and fascinating things to see-- from underground cities, several stories deep, where people sought safety from the aggressive Hittites, to ancient churches the earliest Christians built into the sides of steep, inaccessible mountains. No matter how long you stay, there's never enough time. We rented a car, which made it a lot easier-- and made complete sense since we planned to drive south from Cappadocia to the Mediterranean Coast. It isn't easy to pick a few sites to see because everything is so unique and special. I totally recommend the ancient long-abandoned monasteries built into the sides of the Zelve Valley, the tiny churches built into what is now called the Goreme Open Air Museum, and either the Kaymakli or Derinkuyu underground cities. We would drive to our destination early every morning and then hike all day. I love all parts of Turkey but if you can only visit one place outside of Istanbul, it should probably be Cappadocia.
Posted by DownWithTyranny at 10:08 PM