Preparing For Danger In Foreign Travel-- Is There Anything To Worry About In Bali? 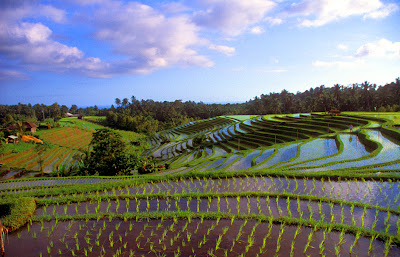 Most of the e-mails I get about this blog ask me how safe it is to travel to Morocco or Mexico or India or Mali... even Buenos Aires. It's safe, it's safe... almost every place is safe-- if you take the same kinds of common sense precautions you would take as a matter of course everywhere you go outside of the gated community.

Today NY Times writer Nicholas Kristof did a column on evading bandits in foreign countries. I've encountered my share of them too-- machine gun toting militia in Afghanistan in 1969, dacoits in Kerala in 1970, hippie-hating Texas Rangers near Waco in 1967, small time hoodlums, more annoying than dangerous, in Tangier, Fez and Marrakech almost every time I've been to Morocco, a crooked landlady in Buenos Aires in 2006... Luckily I missed the domestic terrorism incident outside a church in Wichita, Kansas today (inspired by Republican Party propagandist Bill O'Reilly on his Fox TV terrorism show).

Kristof has 15 tips "for traveling to even the roughest of countries-- and back:"

1. Carry a “decoy wallet,” so that if you are robbed by bandits with large guns, you have something to hand over. I keep $40 in my decoy wallet, along with an old library card and frequent-flier card. (But don’t begrudge the wallet: when my travel buddy was pickpocketed in Peru, we tried to jump the pickpocket, who turned out to be backed by an entire gang ... )

2. Carry cash and your passport where no robber will find it. Assuming that few bandits read this column, I’ll disclose that I carry mine in a pouch that loops onto my belt and tucks under my trousers.

3. Carry a tiny ski lock with a six-foot retractable wire. Use it to lock your backpack to a hotel bed when you’re out, or to the rack of a train car.

4. At night, set a chair against your hotel door so that it will tip over and crash if someone slips in at 4 a.m. And lift the sheet to look for bloodstains on the mattress-- meaning bed bugs.

5. When it gets dark, always carry a headlamp in your pocket. I learned that from a friend whose hotel in Damascus lost power. He lacked a light but was able to feel his way up the stairs in the dark, find his room and walk in. A couple of final gropes, and he discovered it wasn’t his room after all. Unfortunately, it was occupied.

6. If you’re a woman held up in an isolated area, stick out your stomach, pat it and signal that you’re pregnant. You might also invest in a cheap wedding band, for imaginary husbands deflect unwanted suitors.

7. Be wary of accepting drinks from anyone. Robbers sometimes use a date rape drug to knock out their victims-- in bars, in trains, in homes. If presented with pre-poured drinks, switch them with your host, cheerfully explaining: “This is an American good luck ritual!”

8. Buy a secondhand local cell phone for $20, outfit it with a local SIM card and keep it in your pocket.

9. When you arrive in a new city, don’t take an airport taxi unless you know it is safe. If you do take a cab, choose a scrawny driver and lock ALL the doors-- thieves may pull open the doors at a red light and run off with a bag.

10. Don’t wear a nice watch, for that suggests a fat wallet and also makes a target. I learned that lesson on my first trip to the Philippines: a robber with a machete had just encountered a Japanese businessman with a Rolex-- who now, alas, has only one hand.

11. Look out for fake cops or crooked ones. If a policeman tries to arrest you, demand to see some ID and use your cell phone to contact a friend.

12. If you are held up by bandits with large guns, shake hands respectfully with each of your persecutors. It’s very important to be polite to people who might kill you. Surprisingly often, child soldiers and other bandits will reciprocate your fake friendliness and settle for some cash rather than everything you possess. I’ve even had thugs warmly exchange addresses with me, after robbing me.

13. Remember that the scariest people aren’t warlords, but drivers. In buses I sometimes use my pack as an airbag; after one crash I was the only passenger not hospitalized.

14. If terrorists finger you, break out singing “O Canada”!

15. Finally, don’t be so cautious that you miss the magic of escaping your comfort zone and mingling with local people and staying in their homes. The risks are minimal compared with the wonders of spending time in a small village. So take a gap year, or volunteer in a village or a slum. And even if everything goes wrong and you are robbed and catch malaria, shrug it off-- those are precisely the kinds of authentic interactions with local cultures that, in retrospect, enrich a journey and life itself.

I'm not vouching for any of that, although in my preparations for a rapidly approaching trip to Bali and Thailand, I did dust off my "decoy wallet." Most of my preparations for Bali, though, are even more mundane. The best time to visit: dry season is between April and September, although last time I was there, it was November and December and it may have been more muggy than it is in June and July but I recall it being pretty uniformly gorgeous every day. I know I swam every day too.

I would have rented the same house I rented last time but it isn't available this year. So I asked a friend of mine who lives there to find me something similar-- away from the tourist hellholes on the south coast, up near Ubud closer to the center of the island. He came up with the Villa Di Abing. I made sure the cook can work with vegans and raw foodists-- the house actually has a dehydrator and a VitaMix!-- and then I booked my ticket, bought some sun block and we're ready for our trip. (The villa has a security guard.)
Posted by DownWithTyranny at 2:41 PM

Travel into the paradise island of Bali and get special rates for some recommended Bali hotels, tours and travel package. There are many collections of great hotels in Bali including luxurious Bali villas at discount rates.