How Safe Is Mali For American Tourists? 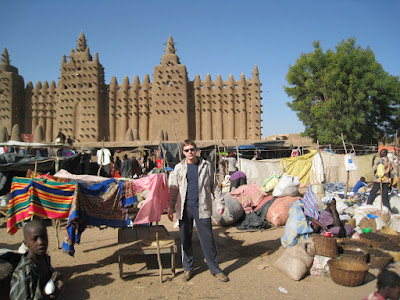 Roland at the Djenne market

After spending some time in Dakar and Bamako I posted about how I found both cities very safe for tourists. Now that I've traveled around Mali a bit I thought I'd expand the idea to assure tourists that the whole country-- or at least the places tourists go-- is, if not like Disneyland or Dollyland, a safe choice for an exciting adventure trip.

Roland and I were traipsing around Sanga last week-- a place so foreign to the American experience that one would have to be on another planet to find something more exotic-- when we ran into a gaggle of American Peace Corp volunteers on holiday. They're stationed around West Africa, mostly Mali and Burkina Faso I gathered, and the State Department and U.S. Embassy in Bamako have decreed that no Peace Corp volunteers are allowed to venture north of some imaginary line (like around Mopti, I think), which means no Timbuktou. They said it is too dangerous because of Tuareg bandits on the roads-- and that the local airlines, C.A.M. and M.A.E., are too dangerous (i.e., non-compliant with FAA guidelines) for Americans to fly on-- so that their employees could not go to the northern two-thirds of the country.

We spent a few days in Timbuktu, which gets bad-mouthed by most tourists as not worth the trip. They're wrong. Timbuktou is fascinating and exotic and if it doesn't live up to your dreams of the 13th century or to Paul Bowles' Sheltering Sky, get real and open up to what actually is being offered there. As for danger... there's nothing remotely dangerous, other than a difficult road getting there, the bad exhaust fumes from motorbikes in town and the fucking mosquitos (we've just given up on not being bitten; it's not possible. Just learn to love the Malarone.)

We were waiting for a couple hours for the ferry to take us across the Niger on the way to Timbuktou and the settlement there is a Bella one. Until 1973's epoch drought nearly wiped out the Tuareg's camels and herds, the Bella had been their slaves. In 1973, basically because the Tuareg couldn't feed them anymore, they emancipated them-- although I have heard that there are still some small services that many of them still render to their former masters (like when there is a wedding or something). Anyway, this Bella settlement was all festive and bustling like all the villages we visited in Mali, when a couple of pickup trucks filled with Tuaregs pulled up to the bank of the river. Suddenly things got much quieter. Many of the little children seemed to disappear. It reminded me of a scene from Star Wars when some alien warrior people dropped by a space cafe. Anyway, the Tuaregs were pretty well-armed with swords and daggers and God knows what else and they don't seem to smile much; no chatty bonjours and they certainly don't ask you for a Bic or an empty water bottle or candy. The Tuareg War ended in the mid-90's though and they seem to be peaceable enough (except around Kidal) and way in the northern Sahara where Mali, Algeria and Mauretania share vast trackless wastes. In Timbuktou, they were certainly easy enough to get along with.

In fact, one of our most memorable adventures was when our guide, Mohammed, took us out into the desert one night to meet some Tuaregs who had just come from Araouane to trade for millet. They were also open to trade for the stuff we no longer needed-- mostly stuff Roland had picked up at the 99 cent store before coming here-- like a pair of cheap extra sunglasses-- as well as my REI walking sticks, half a dozen cans of sardines, shaving kits from Air France, a t-shirt, a roll of toilet paper, organic mosquito repellent that seems to attract mosquitos, etc. We got some nice Tuareg "silver" bracelets, a pipe and an agate necklace-- and had a long Tuareg tea ceremony before this whole thing got started... all by the light of the moon and stars. The Tuareg basically live their lives by the light of the moon and the stars.

I mentioned the other day that Mali is a Muslim country in the context of how Muslim countries are normally safe places to travel. Like I've been saying, Mali certainly seems safe enough, but it doesn't actually seem all that Muslim. Women aren't covered up and are everywhere and seem to play leadership roles in society. I've seen more women covered head to toe in London than in Bamako. And the dancing... well, to say some of it is erotic doesn't even begin to suggest how a Muslim fundie cleric would react. The dour Tuaregs seem to take it more seriously than most.

A couple weeks ago I went to a wedding celebration out in the sticks. For some reason I had imagined it would be something like one I went to in a small village-- real small: two family compounds-- in Afghanistan in 1969. There were no women at that one-- no bride, no groom's mother... no, it wasn't a forerunner of a No On 8 reform in pre-Taliban Afghanistan. The women were kept in strictest purdah and although I was living in the house for months and the groom was my best friend, I never did meet his new wife. Instead of women, the entertainment at the Afghan wedding was dancing boys-- really, really young ones-- with some kohl and cheap jewlery. My friend's grandfather grabbed one, quite forcibly, and raped him behind a building while the festivities proceeded. Afterwards the disheveled boy straightened his outfit and got back into the dance, looking mighty pissed off. 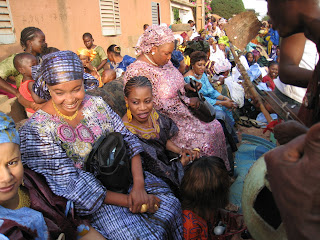 Mah Kouyate in the middle with no headgear

The Malian festivities were nothing like that-- a fully integrated affair with raucous joy, lots of music and dancing, mostly led by women. Almost all the local celebrities who were made a big fuss over were women-- including celebrated singer Mah Kouyate, who now lives in Burkina Faso and made the trip all the way to Mali-- and the only male celebrity other than a famous drummer who was playing, was some local version of Liberace who fancied himself the m.c.

But below the surface, Malian women have some big problems to contend with-- even if you don't consider polygamy a problem in and of itself. In every Dogon village we visitted there is a "special" women's house where women are kept while they're menstruating. They're considered impure; it's very primitive but I gather it's just an animist Dogon thing and not prevelant in general Malian society. Everyone tells me that as soon as a Malian man marries he's out looking for as much side action as he can find and that the women are pretty pissed off. They're also pregnant a lot. Almost every woman we see has an infant strapped to he back as she goes about her arduous life. Men here hate condoms. One guy we met in Dogon country-- although he's from Segou and has been to NYC-- says he would never use a condom because it would make him unable to perform up to par. And, yes, AIDS is a gigantic problem here.

Anyway, if you're now forewarned about the dangers of sex here, consider the road travel-- or any travel. We didn't let the knowledge that a hippo can break apart a pinasse ruin our wonderful day of floating down the Niger and Bani rivers near Mopti visiting Bozo fishing villages. Some tourists took the 3 day boat trip-- two nights camping along the shore-- from Bamako to Timbuktu. We drove from Sanga in Dogon country after 3 days there. Simply put, the road from Sanga to Douentza, halfway from Dogon to Timbuktou, has to be the worst road on earth. People talk about how bad the Timbuktou road itself is-- and it's rutted washboard and uncomfortable and we broke down in the desert twice-- but it is nothing compared to the Sanga road, which is just various sized boulders that you drive over while praying.

Roland fears Tupolov planes the way I fear sharks and crocodiles but he was willing to pay anything to get on one to get out of Timbuktou without having to get back on the terrible road again. I might mention that the road from Bamako in the west to Gao in the east, which covers much of the populated parts of the country, is a decent 2 lane paved road. The airlines were a little lax and dicey but we made it fine and who cares if there was no security whatsoever and if the stewardess returned some guy's spear as soon as we took off?

Posted by DownWithTyranny at 2:48 AM

Thanks for your insights. Practical questions: Do they accept only CFAs,$ or Euro? how did you travel from city to city? how much was each starting price, each final price?! Were you always swarmed with beggars and touts? Carry your own water, bread, fruit, toilet paper? Take vaccinations before? anti- malarials?
If by river, in which month? What were the day and night temps? Thanks again for your help.

Do people in Mali speak english?

The second language of the country is French. But people who come in contact with tourists on a regular basis speak English and English is taught in schools. And, people who think of themselves as global citizens make an effort to learn English. But, no, English isn't widely spoken in Mali.