What Are The Hip And Happening Countries To Visit In 2011? 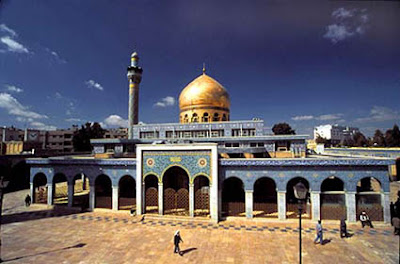 Damascus-- the place to be in 2011
"The jig is almost up-- Albania won’t be off the beaten track for much longer." That's the last line of a description of #1 on the Lonely Planet's Top 10 Countries For 2011. The list was compiled by Lonely Planet's" in-house travel experts" and the choices were made "based on scores topicality, excitement, value for money and…that special X-factor." And they published a full scale guide book for this as well, Best In Travel 2011.

So far my own 2011 travel plans include ringing in the New Year in Marrakesh, followed by London, then a few weeks in Russia during the summer, followed by a whirlwind tour of the 3 Baltic countries, Estonia, Latvia and Lithuania, then Poland and a bit of a rest in Berlin-- where I once lived when it was still a divided city-- before coming home. And next Christmas, we're thinking about Istanbul, an old fave, and Damascus, someplace we've always wanted to go and the only destination on the Lonely Planet 2011 list we'll be seeing in 2011.

So, they think Albania is the coolest destination for the coming year. I don't know... I sure liked it a lot-- first impression here and second impression here-- but I wouldn't say it was something anyone in their right mind would pick in place of Rome or Nepal or Bali or... well, I could probably name 100 better destinations. And I liked Albania. Roland hated it. Lonely Planet:

Since backpackers started coming to elusive Albania in the 1990s, tales have been told in ‘keep it to yourself’ whispers of azure beaches, confrontingly good cuisine, heritage sites, nightlife, affordable adventures and the possibility of old-style unplanned journeys complete with open-armed locals for whom travelers are still a novelty. Sick to death of being dismissed with blinged-up crime-boss clichés, Albania has announced ‘A New Mediterranean Love’ via its tourist board.

We were there in December so we passed the beaches by, which are packed with European tourists looking for someplace cheap. I liked the food and the sites but not everyone would. The locals were fine and the nightlife was nothing to write home about. That this was numero uno, throws the whole enterprise into doubt for me.

Their second choice is Brazil. I never made it to any of the great Brazilian cities so I'm not one to judge. And Brazil is definitely on my list. My only trip into the country was a side trip from Argentina when I went to the stunning Iguazu Falls National Park. It sounds from the Lonely Planet description that the reason to go in 2011 is because it'll be so wonderful in 2014 (World Cup) and 2016 (Summer Olympics).

I have to admit that I never considered #3 or #4, Cape Verde and Panama. I spent a couple of memorable weeks in Bulgaria (#5) in 1969 but I just don't see it as a tourist destination. I was on my way to India from London in a VW van and I decided to stop and see Bulgaria because all the travelers said it was worthless and hurried on to Istanbul. The rebel in me was right, but mostly because I met some really nice people who took me all around the country.

#9, Syria, is, like I said, the other place we're planning on visiting in 2011. The NY Times made it sound really unattractive to me-- after an alluring intro-- this weekend in their 36 Hours in Damascus write up.

Damascus loves to flaunt its age. It claims to be the world’s oldest inhabited city-- replete with biblical and Koranic lore, Roman ruins, ancient Islamic edifices and Ottoman-era palaces. But that’s not to say the Syrian capital is stuck in time. Dozens of centuries-old mansions have been reborn as Mideast-chic hotels, and fashionable shops and restaurants have arisen in the ancient lanes of the Old City. Throw in a fledgling generation of bars and clubs, and the age-old metropolis has never looked so fresh.

My idea of a good trip is to find a comfortable place to stay in an exciting environment and live life there. And Damascus fits that bill, even if I don't quite follow the Times itinerary. Lonely Planet's description was more to my liking:

Savvy tourists can lord it up like a pasha, staying in lovingly restored Ottoman palaces and sipping cappuccino after shopping it up in the souq. But with all this modernisation it’s good to see some things are still the same. Out east the Bedouin still herd their scraggly sheep and welcome strangers into goat-hair tents for tea. Aleppo and Damascus’ Old Cities remain mazes where the best maps won’t work, and the countryside is still a vast open-air museum, strewn with the abandoned playgrounds of fallen empires. With hospitality still a national obsession, the attitude to visitors hasn’t changed either.

The other countries on the list are Vanuatu, Italy, Tanzania and Japan. They say Japan isn't really expensive. I've been there several times. It was really expensive, super-expensive. But they say there are English street signs now. OK.
Posted by DownWithTyranny at 9:00 AM