TWO OF MY FAVORITE SPOTS IN ARGENTINA: THE IGUAZU FALLS AND ESTEROS DEL IBERA 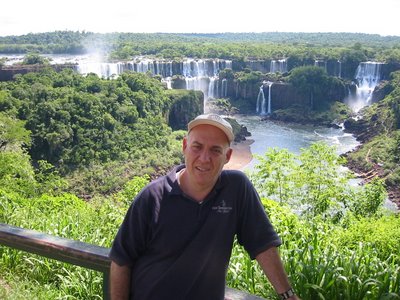 When I originally decided to go to Argentina, it was the remoteness of Tierra del Fuego that drew me. As I explained earlier, I just wanted to go to the end of the world and be quiet and empty. But as I started planning out the trip I came upon two other places in Argentina that looked interesting and turned out to be just as soothing to the soul as Tierra del Fuego. One is very well-known, Iguazu, and one not well-known at all, Esteros del Ibera. Both are way up north jutting up into the Brazilian tropics. The former is in Misiones Province and the latter in Corrientes Province. 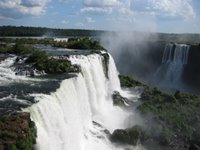 Iguazu is one of the wonders of the world and attracts millions of tourists. Located in an area where Brazil, Argentina and Paraguay meet, it is actually between 250 and 300 individual waterfalls strung out for a couple of miles. Brazil and Argentina have impressive national parks built around the falls. They positively dwarf Niagara Falls.

There are only two hotels within the national parks, a Sheraton on the Argentine side and the more luxurious-- in an old fashioned/old world kind of way-- Tropical Hotel Das Cataratas on the Brazilian side. Both are pretty expensive, primarily because of their locations inside the parks. I stayed on the Brazilian side and walked to the middle of the falls several times a day, every day-- as well as at night. The towns are miles away and not convenient. If you don't stay in the park, you have to make a trip to the falls, not just open your bedroom curtains or go for a stroll. 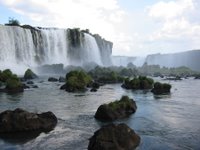 The problem with being at Das Cataratas is that there's nothing around and you're completely at their mercy. And they take advantage of that to charge outrageous prices for everything-- something, in fact, everyone in the area does. All services have a price for locals and a price for tourists. You want to guess which is higher? And it's a lot higher. Every hotel I stayed at, from the Park Hyatt at over $500 a night to the $35/night Julio Cèsar in Posadas, let guests use their computers and Internet connections for free except one-- Das Cataratas. And in Buenos Aires the locutorios charge a peso an hour to use a computer (around thirty cents). At Das Cataratas it was something like $9 an hour. Meals were decent but not great-- and quite over-priced, there being no place else to go. 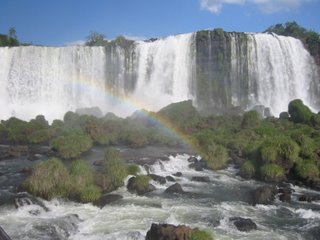 On the other hand, the falls are so spectacular and so awesome that it's worth the rip. In fact, in light of the sheer spectacularness, the rest of it is inconsequential. It's an hour and change plane ride from Buenos Aires and it is a must see. I might add the room rates were somewhat negotiable and that the service staff was friendly and eager to please.

The other place, Esteros del Ibera, I kept wanting to cancel everywhere along the planning process. I mean who voluntarily goes to a swamp? I wound up going anyway-- inertia-- and it was completely amazing. The most important thing was to get the idea of "swamp" out of my head. This was easy because the place is not only gorgeous, it is fresh and even cooler than everyplace around it. The water is so beautiful that if it weren't for the alligators, pirhanas, capybaras and anacondas, you'd want to jump right in-- as many of the folks who live around there do anyway (and have the missing fingers and toes to prove it).

It's not that easy to get there-- rutted dirt road that looks like no fun in downpour. And there is virtually no public transportation. You have to rent a 4 wheel drive vehicle in Posadas. The tour book says $85 but prices have gone up and they charge a lot more, although, they're not opposed to negotiations and discounts. My driver from Guayra Turismo was great and made the process of getting there far more pleasant than it might have been. 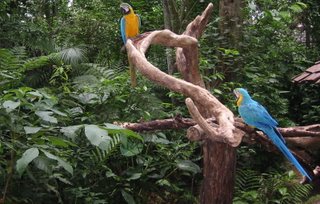 I stayed at an incredible, magical place called Posada de la Laguna, a top-of-the-line lodge right on the lagoon. It's the kind of place that is perfect for laying in a hammock reading and sleeping all day-- which is exactly what I did, except when I was out in the boat looking at the wildlife. The food was superb; they have a real chef who made me completely delicious vegetarian meals 3 times a day. At first I was the only guest but eventually a couple of really nice Brits backpacking around South America turned up and then a delightful couple from Montana showed up in their own van out of the blue. It was nice to be alone and it was nice to be with other guests. The whole experience was fantastic and I recommend it highly.


UPDATE: A LETTER OF RESPONSE FROM THE HOTEL DAS CATARATAS' GENERAL MANAGER 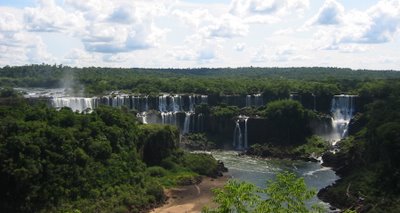 As I was checking out they asked me to fill in a comment form. I did and I touched upon some of the topics I brought up above. I just got an e-mail from Jose Acir Borges, Cataratas' general manager.

In attention to the suggestions form you filled in regarding your stay at the Tropical Das Cataratas Hotel between the 04th and the 06th of December, 2006, we would like to thank you for your time and inform that it was taken in high consideration by our managerial staff.

Concerning your mention about Internet, we are mindfully analyzing it, in order to take the necessary steps.

We would also like to highlight that all the concepts and opinions expressed in the suggestions form were included in our guest evaluations statistical system, helping us improve the quality of our services.

We thank you again for your attention and preference, and take advantage of this opportunity to reinforce our strong commitment to your satisfaction.

UPDATE: ANOTHER WAY TO SEE BRAZIL-- AND LOSE SOME WEIGHT IN THE PROCESS

I wouldn't recommend trying this one, but "Slovenian Martin Strel completed his swim of the entire 3,272-mile Amazon River on Saturday, a 65-day odyssey in which he battled exhaustion and delirium while trying to avoid flesh-eating piranhas and the dreaded bloodsucking toothpick fish." He started in Peru and finished yesterday at Belem, Brazil on the Atlantic Ocean. Struggling with dizziness, vertigo, cramps, high blood pressure, diarrhea, chronic insomnia, larvae infections, dehydration, abrasions caused by the constant rubbing of his wet suit against his skin, nausea, severe sunburn and delirium, as well as the loss of 26 pounds, Mr. Strel was lucky to have escaped the interest of the piranhas, toothpick fish and bull sharks. "I think the animals have just accepted me," he explained, obviously no quite over the delirium yet. "I've been swimming with them for such a long time that they must think I'm one of them now."

Strel has already swum the lengths of the Danube (1,866-miles), the Mississippi (2,360 miles) and the Yangtze (2,487 miles). He spurns the Nile. "I am not going to do the Nile. It's long but not challenging enough, it is just a small creek. The Amazon is much more mighty." Or maybe he's sensible enough to realize the crocodiles might not be as accepting as the piranhas, bull sharks and toothpick fish.
Posted by DownWithTyranny at 5:34 PM

Hi, sorry to bother you, but my wife and I are trying to work out whether we can fit Iguacu and Esteros Del Ibera into six days (as part of a three week trip, the rest of which will be in Brazil). Did you travel from Iguacu to Esteros or vice-versa? Is there a direct bus from Iguacu to Mercedes, or any of the other access towns? And if so do you know how long it takes? Any advice would be enormously appreciated!

I loved the Iguazu Falls, but I have already been in the North of Argentina, now I want to go South.
My friend told me what keinPatagonia: you can eat breakfast and then head out with your bird-watching guide in search of the majestic condor, with its 3m (10-ft.) wing span. You'll look for shorebirds on the coast of Lago Argentino and the mighty predators amid the high peaks of Cerro Frías. In the afternoon, enjoy a leisurely tea in the ranch's living room, with binoculars nearby. Dinner will also be served in the estancia. It is a paradise! Then, of course, get an apartment in buenos aires  in the capital so that you can rest after such a hectic experience!