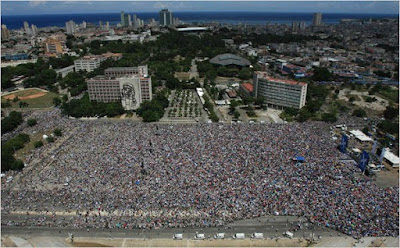 Havana, yesterday; maybe Glenn Beck can use this pic next year
When I woke up yesterday morning and checked Twitter I noticed that mad dog Miami Congresswoman and anti-Cuba fanatic Ileana Ros-Lehtinen (R-FL) was howling about Juanes' "Peace Without Borders" Concert in Havana. Juanes is a Colombian pop idol living in Miami and Ros-Lehtinen, who is already supremely unpopular with Miami's large and growing non-Cuban Hispanic population, was aghast that he was comforting her enemy with his music. Between half a million and a million people showed up in Revolution Square for the event, more than ten times the number of people who bothered going to Glenn Beck's Million Moron March on Washington last weekend. Unlike the Moron Marchers, Juanes' 14-artist concert wasn't about hatred, racism or political paranoia. It was about peace and love and music. Ros-Lehtinen and other far right old school Cuban desperados used to be able to dictate American policy-- always punative-- towards Cuba. Those days seem gone as the long overdue thaw in relations between the two countries takes on a life of its own outside of government interference. 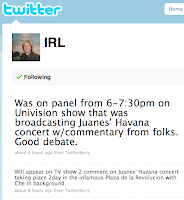 Back in Ros-Lehtinen and the Balart Brothers' Florida-- a corrupt and stale leftover from Batista's fascist regime in pre-Revolutionary Cuba-- "Juanes had endured death threats, CD-smashing protests and boycotts since announcing his plan for the concert in Havana," although the kinds of people boycotting him weren't from his demographic. The Balarts were pulling out their hair because "Spanish-language stations covered the event, and several exile groups voiced support, describing it as a rare chance for Cubans to get a glimpse of the outside world."

Asked during his Univision interview what he made of it, Obama was positive about Juanes' music and had no problem with the event. His administration's go-slow pace of normalizing relations is just starting to talk about sending mail. People are moving faster than he is though, and every month the travel ban becomes less and less relevant. I'm going to guess that as many people weren't born as were when the U.S. slapped its pointless travel embargo on Cuba. It's time for that to end.

UPDATE: Will U.S. Travel Ban Against Cuba Be Overturned This Year?

California Congressman Sam Farr thinks there's a chance. “It is believed we can get to this before the end of the year,” said Farr. “We haven’t had a policy about Cuba. We’ve had policies about getting votes in Florida and Obama changed that by getting those votes... If you are a potato, you can get to Cuba very easily. But if you are a person, you can’t, and that is our problem.”

The bill to let U.S. citizens resume travel to the Caribbean island except in times of war or cases in which they face imminent danger has 181 votes in the House and needs 218 to pass, said Farr, a co-sponsor of the legislation. The plan is backed by travel groups such as the United States Tour Operators Association and the National Tour Association and human rights groups such as the Washington Office on Latin America and has been helped by President Barack Obama’s election, he said.

...Ending the travel ban may lead as many as 1 million Americans to visit the island every year, Lisa Simon, president of the National Tour Association, known as NTA, said in an interview. It would also help push forward talks on human rights issues, Thale said.

“We’ve had a policy for 50 years of isolating Cuba and it hasn’t done anything about the human rights situation,” Thale said. “I don’t think there is some magic solution. I don’t think ending the travel ban will cause Fidel to say let’s have elections, let’s release all the political prisoners tomorrow. What it will do is open the process of dialogue.”

Obama’s administration has been showing a “gradual relaxation and diplomatic opening” toward Cuba, Thale said. He cited the government’s decision to reinitiate talks on migration and direct mail, and also to put down the billboard operated by the U.S. government outside its special interests section in Havana, which he said often displayed anti-Cuba messages.

Posted by DownWithTyranny at 9:39 PM No comments:

Is Right Wing Extremism Threatening Tourism In The Palmetto State? 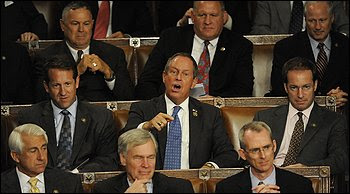 Since South Carolina secessionist and radical right Senator Jim DeMint is the Senate's most ardent obstructionist and votes "no" on virtually everything, it's sometimes difficult to tell when he really means it. When the Senate got back from their long summer vacation, they immediately took up S.1023, the Travel Promotion Act of 2009 and it passed with a huge bipartisan majority, 79-19. DeMint, as usual, was one of the 19. What's he got against promoting travel? Charleston

, Hilton Head Island, Drayton Hall, Fort Sumter, Magnolia Plantation, Myrtle Beach, the Riverbanks Zoo and Botanical Garden in Columbia, Murrells Inlet, Mount Pleasant... are all being heavily promoted by South Carolina's burgeoning tourism sector. Now DeMint is still freaked out and hysterical that one year ago his state's tourist industry was catering to gays with an international campaign "South Carolina Is So Gay," a campaign not directly related to the gargantuan number of closet cases dominating the Republican Party hierarchy in the state, from Lindsey Graham and Lt. Gov Andre Bauer to the state Senate President. 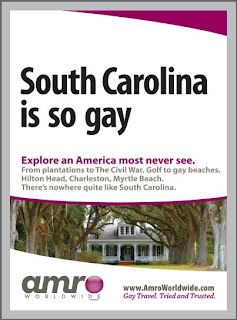 But DeMint may not have to worry about gay tourists-- or any other tourists-- coming to his state. Even without any help from Arthur Frommer, it looks like a spontaneous boycott of South Carolina tourism is shaping up.

State and local tourism officials are being flooded by emails and calls from people across the country, saying they won't vacation in South Carolina because they're upset by GOP Rep. Joe Wilson's outburst at President Barack Obama.

The officials said that a number of the out-of-state e-mailers have said they've taken beach trips for years in Myrtle Beach, Hilton Head and other South Carolina resort areas, but don't plan to return.

...In a new USA Today/Gallup poll, 68 percent of Americans said they "oppose what Joe Wilson did during the speech." Twenty-one percent said they support Wilson's behavior.

South Carolina's $1 billion-plus tourism industry, centered around its beaches, had already been hit by the recession as Americans postpone vacations or cancel travel altogether. The state's 11.8 percent unemployment rate is among the highest in the country.

Marion Edmonds, a spokesman for the South Carolina Department of Parks, Recreation and Tourism, said his agency had received 147 emails from people who cited Wilson by name and expressed displeasure with his remark.

"Some of them have been specific and said they won't be coming to the beach this summer for their family vacation," Edmonds said.

Both Columbia and Hilton Head are major tourist attractions in Wilson's district. His wife, Roxanne, of course, won't be joining the boycott, although she did ask her husband, "Joe, who's the nut who hollered out, 'You lie'?"

At 4pm (EST) House Majority Leader Steny Hoyer and House Majority Whip Jim Clyburn introduced a Resolution of Disapproval on the floor which passed 240-179 (with 5 voting "present").
Posted by DownWithTyranny at 2:42 PM 1 comment: