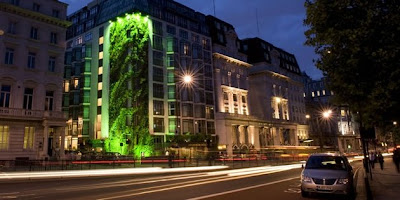 A few years ago I rented a spectacular villa in Bali and one of my friends came over for a few days and stayed-- and then checked into the luxurious Four Seasons Resort at Jimbaran Bay. "I like it but I'm finished camping out," she told me. We had four full time servants, a private pool and... well, I think she saw a bug one night.

Last night I got to London after three weeks in a riad in Sidi Mimoun, Marrakech. It's not as overtly luxurious-- even sybaritic-- as Bali, but it was no backpacker hotel. Like I said, our next door neighbor was the king of Morocco and the neighborhood is filled with the riads of the big name Europeans, like Yves St Laurent, IMF President Dominique Strauss-Kahn, and French philosopher Bernard-Henri Lévy. But it's still Morocco.

I used to have an office in London and I was here often. Warner Bros would pick up the charges for a suite at the Berkeley in Knightsbridge and it was something like $600 a night, a great deal based on the amount of business the company gave them. A single room tonight would cost £389 ($601.68). To walk anywhere from there I would usually head towards Mayfair and the first place I would come to was a beautiful little jewel of a hotel called the Athenaeum. It always intrigued me when I passed by and I made a mental note that when I left Warner Bros.-- and my open-ended expense account-- this would be a great place to stay. And here I am-- fresh out of Marrakech!

The Athenaeum is every bit as luxurious as the Berkeley, just more relaxed and friendly-- and a bit easier on the wallet. The room I have overlooking Green Park goes for £ 300 ($463.81); same room without the view is £ 250 ($386.48). It's Roland's dream room because the mini-bar is well stocked... and free. He's in heaven. When we first started traveling together Roland would never have even thought about the sheets, let along mentioned things like thread count. Last night he was raving about how luxurious the sheets-- Frette-- are. Ever since getting on the plane yesterday morning-- a short ride that took a whole day-- I had an urge to wash Morocco away. As soon as I got to the room I saw all the bathroom accessories were by REN and the towel warmer groaned with fluffy Floringo towels.

It was so wonderful to take a shower where they've mastered the idea of bright lights and warmth in the bathroom. And the quilted, padded toilet paper-- especially after that rough stuff in Morocco-- beyond imaginging! I understand why my friend called out Bali villa "camping" and why she wanted to be pampered at the Four Seasons. It's not a bad way to travel. And it's a London home for one of Patrick Blanc's vertical gardens. Never heard of them?

Patrick Blanc’s Vertical Gardens are an artistic expression of his scientific practise. He spent decades examining the way that numerous wild plants naturally grow on vertical rock faces and trees. Consequently, he perfected a technique that enables urban plants to grow vertically without the need for soil. A system of slats is used to secure artificial felt and myriads of strategically placed plant roots, with automated watering and fertilisation. It’s nothing short of botanical architecture. 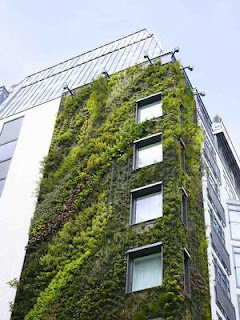 Outside, conditions can't be controlled, but Blanc has found at least 300 different plants that he uses to create the futuristic swirls and arcs of his extraordinary tapestries. His current top star is Iris japonica, which he would never have thought of including had he not seen it hanging off a rock in Japan, looking far happier than it usually does in a garden. It contrasts well with the softer foliage of other favourites such as Fuchsia hatschbachii and F. regia. They are all on the Athenaeum wall. So is the maidenhair fern (Adiantum capillus-veneris) and more surprisingly, the Chilean bromeliad, Fascicularia bicolor. Look up next time you are passing. By Blanc's count, there are more than 250 different plants growing here. That's quite a garden.

For each location, he carefully selects plants according to local climatic conditions and the visual effect he wants to create. Patrick has won many awards for his work and also gives lectures around the world.

To date, he has created over 140 public Vertical Gardens since 1994, as well as many private installations. Those of particular note include:

• The Quai Branly Museum in Paris

• The Aquarium in Genoa

• The Siam Paragon Mall in Bangkok

• The 21st Century of Art in Kanazawa, Japan

And as the hotel puts it, "So why have we installed a colossal Vertical Garden up the side of The Athenaeum? Yes, aesthetically it echoes Green Park, over the road. Yes, it provides an important haven of biodiversity for the capital. But primarily, it’s just fun. We love it."

They also have two huge cedar wood tubs as jacuzzis in the luxuriant spa, next to a fabulous techno gym. I'll be soaking and steaming while Roland works out later. IF... I can get off the free WiFi. WiFi isn't always free in London so it's a good deal-- though not as much as the savings you get by their policy of all kids 12 and under eating all meals for free. I wonder if I can pass Roland off as 12.

Our last night in Marrakech, we broke one of my cardinal rules: always eat the native cuisine. But after 3 weeks of Moroccan food-- and more couscous than anyone was meant to eat, I allowed my friends to talk me into "Indian" food. Mumbai and Delhi and London have great Indian food. Marrakech... not so much. The Sunday Times did a story on the 8 best restaurants in Marrakech and #2 was Les Jardins de Bala just off the Jemaa el Fna at the Les Jardins de la Koutoubia Hotel. They said the views (of the Koutoubia) were stunning, but that would be for the outdoor dining and they claimed that the restaurant served "indulgent Indian: food from bhajis and banana lassis to saags and samosas is available in truly stylish surroundings." The food was actually bland and boring and Roland, Melody and I-- longtime Indian food fans-- were aghast. As soon as we got to London, almost as important as a shower was a real Indian meal. Tamerind was booked up already and we didn't want to go far and the hotel suggested a restaurant I had never tried just down the road at #1 Kensington High Street, Zaika. They got us a reservation and off we went. A curry house it's not. Innovative, sophisticated, absolutely delicious and creative... that's what it is. They put it like this: "[T]he menu incorporates both traditional classic favorites and original new dishes that apply eastern flavors with a western twist. Both of us stared with Nariyal Shorba-- "coconut and wild mushroom soup, tempered with curry leaves and ginger, truffle shavings, mushroom samosa, wild mushroom and truffle oil naan"-- and Les Jardins de Bala was banished from our consciousnesses forever. I had a vegetarian thali-- a selection of garlic and cumin tempered spinach and paneer, stir-fry ‘parval’, black lentils, roasted baby aubergines , saffron rice, baby naan & ‘raita’-- and Roland had a Nuriyal Murg-- "morsels of chicken legs cooked gently with coastal spices, finished with coconut milk flavoured with shallots, green chillies, steamed rice." We were stuffed and happy and ready for a great sleep that wouldn't involve the charming call to prayer from a loudspeaker-enhanced muezzin at 5AM.
Posted by DownWithTyranny at 3:00 AM