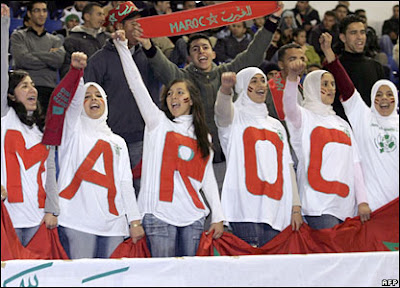 It's nearly 11 AM now, the middle of our second day in Marrakech. Fatima came at 9 and made breakfast and we're just relaxing before going out for another arduous day of exploring the souks and hidden gardens of Marrakesh.

The riad is superb. Officially there are 4 bedrooms but actually there are 4 bedrooms plus 2 childrens' bedrooms. When you enter, you come to a central courtyard, which is covered by a retractable roof three stories up. The kitchen is there and it's kind of a sitting room/dinner room. Off that is Lisa's suite, the only bedroom on the first floor. The riad has been lovingly restored to a really incredible degree combining modern expectations with traditional North African fantasies. Beautiful tile work, beautiful iron work, incredible fixtures, doorways to die for... Every detail is just wonderful. The neighborhood, Sidi Mimoun, is pretty cool too. Our next door neighbor is Mohammed VI (the king). We were warned by the property manager to refrain from pointing cameras at the palace from our rooftop terrace. On the other side of our riad is Yves St Laurent's riad. To get to our riad off the main street of the neighborhood, you have to go down a couple of alleys where there are no cars. So it's pretty quiet here, other than when the neighborhood children get going with a drum circle.

Anyway, upstairs are the rest of the bedrooms plus a large living room, which I'm using as an office as well. It has a beautiful Moroccan style tiled and brick fireplace-- as well as a more traditional-- actual modern-- heater. It gets up into the 80s in the daytime but down to around 5o at night. The third flight up is the rooftop terrace, although halfway to the top is one of the childrens' bedrooms, the same as any of the other bedrooms except without an en suite bathroom.

Yesterday I took Lisa around to get a feel for the Medina. She loved it and basked in the foreignness and exotic feel. I told her Fes is 10 times more foreign and exotic but she probably thinks I'm exaggerating. I'm not. Marrakech may seem otherworldly but it's very cosmopolitan, with thousands of Europeans living here... and tourists everywhere, and very much being catered to in terms of restaurants and shops. There's even a vegetarian restaurant, Earth Cafe just off the Jemaa el Fna on Riad Zitoun el Kedim. We had a yummy-- albeit salty-- lunch there.

One thing we saw last night that really knocked me for a loop was a first. Morocco was formerly overrun with aggressive touts-- not just persistent pests insisting on being your guide; they still have some of that-- but threatening unemployed young men who made it more than unpleasant for tourists. Eventually-- by the 80s-- the bazaaris, who really run this country "got rid" of them. The very aggressive ones ceased to exist in city after city. It's even safe to walk around Fes now. Roland says it reminds him of Disneyland. Now that's an exaggeration. But last night in the Jemaa el Fna, the main square, we weren't just accosted by the regular assortment of young male touts but, for the first time (for me), two separate female touts! They weren't shy and it just isn't something you would ever expect to see in a Muslim country. You've come a long way, baby! A shopkeeper we met told us the government is even discouraging polygamy, probably more than the Morman cults do.

UPDATE: And Speaking Of The Changing Role Of Women In Moroccan Society

Al Fassia is one of Marrakesh's best restaurants and it's run as a woman's cooperative. We're going to have dinner there tonight. Last time I was in Marrakesh, almost 5 years ago this is what I had to say about it:

The only restaurant in Guéliz (the new city) we went to is the justifiably famous Al Fassia. The 2 unique things about it is that it is entirely run by women and that they revel in the concept of a la carte, never an easy thing for foreigners to find. The food was superb and expensive but not over the moon. And, like many Moroccan eateries, if you give them enough notice, they'll prepare things for you by order. The menu has all the best Moroccan standards and you can pick the ones you want and not have to bother with the ones you don't. It was sold out when we went and they said we'd have to come another time but begging and pleading helped and we were seated in an hour.

Tonight we have a reservation.
Posted by DownWithTyranny at 8:45 AM