Albania-- Second Impression: Shqipëria Has Plenty Of Room For Improvement 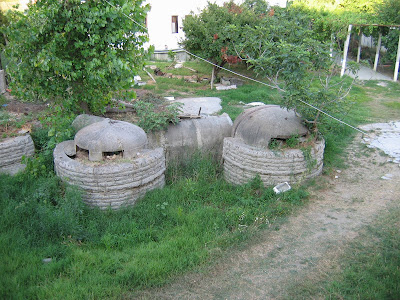 We've been out of Tirane, traveling around the country on buses. If the capital was all energetic/optimistic hustle and bustle with everyone looking forward to a brighter future with McDonalds and everything that makes life worth living, the interior is probably as wary of anything new and foreign as Albanians have always been. Most people seem resigned. They don't see much difference-- at least not in their own lives-- from the bad old Enver Hoxha days when communists ruled the roost. (A bright spot is that the inevitable excesses of religious fanaticism are nowhere to be seen. If a third of the country is nominally Christian and a third nominally Muslim, 90% are practicing non-believers. London is at least 10 times more Muslim than Albania.)

One guy we met-- who dreams of winning the lottery (and here "the lottery" means the U.S. visa lottery, not the Irish Sweepstakes)-- told us most people, and virtually all older people, would gladly trade in "democracy" and the vagueries of the market system for the security of the bad old days. How is that possible? Start with something like 80% unemployment/underemployment. Our friend down in Gjirokastër said since 1990 it's been all Law of the Jungle. A few natural predators have gotten very rich. Most people feel left behind. One in eight Albanians are working abroad and the country's economy seems to function off remittances from fathers, brothers, sons, husbands, sisters and daughters working in Italy, Greece, Germany, England and the U.S. We see American flags everywhere, indications not of the fealty they feel towards our country but because they have a relative in the Bronx or Westchester sending home money. Here nearly 60% of the working people are farmers, eking out a meager existence through backbreaking toil. We saw it everywhere in the country.

God made Albania beautiful-- green and verdant, wild, rapidly moving rivers overflowing their banks-- valleys, canyons, lakes, a beautiful sea coast... Albanians have turned it into an eye-sore of a never ending garbage dump. Throughout the country every barren tree is decorated with plastic bags. The whole country looks like a landfill for aluminium cans, plastic bottles, and every sort of detritus man uses to pollute the environment. If I were looking to start a business in Albania it would center on cleaning up the environment. In fact, the EU should make Albanian membership conditional on a serious cleanup effort. Just cleaning out the thousands of round Cold War era cement bunkers would employ a good part of the unemployed for years! I can't think of anywhere in the world I've ever been where a good, solid recycling program would do more good. The Albanians, who seem to have a cigarette permanently grafted to their mouths and whose main occupation apears to be working-- or at least hanging around-- at a lavazh (car wash), don't hesitate to throw trash on the ground anywhere and everywhere.

On the other hand... Albania is incredibly cheap for tourists. We're staying in the best hotels in each town we visit and they cost around $25/night. Food is delicious and fresh and... well, we just had dinner in Kerkulla overlooking Gjirokastër, ate starters, main courses, and desserts (and Roland had a pitcher of local red wine-- plus, he says, 3 baskets of the best bread he ever ate) and it cost us less than $20. It's by far the best restaurant in town! Bus trips between cities cost like between $4 and $7. And it's one of the places were the dollar has become more and more valuable in recent years.
Posted by DownWithTyranny at 4:28 AM