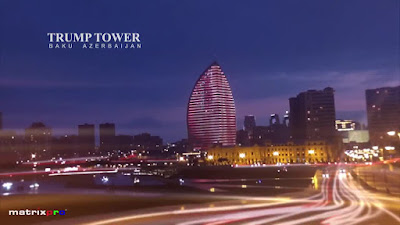 This past summer we were in Azerbaijan, primarily in Baku, the capital city. Really nice place to visit! We noticed that there was a huge hulking Trump Tower in the middle of the glittering skyline. But it was empty. In fact, it was closed down, having only opened for a week before firing the entire staff and shutting down the operation. Presumably they'll remove the toxic logo that the local bandits who own the building paid Trump to use, and re-open it under less toxic name-- like Motel 6 Baku. But Baku isn't the only city where the Trump name is keeping hotel rooms empty... even at heavily discounted prices.

The prestigious new hotel in DC that he's always trying to drum up business for is the cheapest 5-star in Washington-- and the most empty. And the Trump Towers in Istanbul, where the president of the country demanded the name be changed, is desperate to sell over a dozen luxury apartments that no one will buy at very deep discounts.


Property Turkey is privileged to offer to its clients 15 luxury apartments available for sale below market value within Istanbul's prestigious Trump Towers. This is a one-off offer for a limited period only and on a limited number of apartments.

CNN reported that travel agents and events planners are avoiding the Trump brand entirely. In DC, "room rates also indicate the hotel may be lagging behind its competition. A Tuesday night stay at the Trump hotel was priced at $505 on Hotels.com, more than $200 cheaper than five-star alternatives like the Four Seasons and the Jefferson. Comparable hotels like the downtown Ritz-Carlton and Hay-Adams, meanwhile, had no open rooms." The new hotel "has been the target of protests and vandalism since it opened last month. And its namesake's presidential campaign has made the Trump name awkward at best and toxic at worst for those who specialize in the hotel industry. 'There certainly are people who are concerned about the message they send by spending money in Trump-branded hotels,' said David Loeb, a senior hotel analyst at the Robert W. Baird private equity firm. Brand research studies suggest those concerns are taking hold. A Foursquare analysis showed foot traffic at Trump's hotels, casinos and golf clubs is down 16% this year. And a Young & Rubicam report released Tuesday shows consumers think Trump himself is less fun, trendy and stylish than he was three months ago. That's bad news for Trump, who claims his name is worth more than $3 billion in real estate licensing and branding deals. Industry analysts say that number is exaggerated."

Travel + Leisure doesn't, as a rule, slag off potential advertisers, but the news is all over the hospitality industry: Trump Hotels Ditching Name For New Hotels. I don't know if Trump plans on having Barron run the business, but his new hotel ventures will be called "Scion."


Amidst reports that occupancy rates at Trump Hotels have slipped this election season, the company has announced that new brand hotels will no longer bear the Trump name.

The newest line of luxury hotels, geared towards millennials, will be called Scion, the company said.

“We wanted a name that would be a nod to the Trump family and to the tremendous success it has had with its businesses, including Trump Hotels, while allowing for a clear distinction between our luxury and lifestyle brands,” Trump Hotels CEO Eric Danziger said in a statement.

Although Trump Hotels has said the new name has nothing to do with the eponymous businessman’s presidential campaign, empty rooms at the hotels have caused officials “to reduce rates during the peak season," according to New York Magazine.

Nightly rates at the newly-opened Trump International Hotel in D.C. plummeted below $500 while practically every other five-star property was sold out for the International Monetary Fund conference two weeks ago. And after his remarks about Mexican immigrants, two celebrity chefs backed out of their contracts to open a restaurant in the hotel.

According to Hipmunk, bookings at Trump Hotels plummeted 59 percent during the first half of 2016 and data from Foursquare shows a 17 percent drop in foot traffic at Trump properties since June 2015, when the reality TV star announced his presidential bid.

Back to Trump Tower Baku. His crooked partners, the notorious Mammadov family, tried burning the building down for the insurance money. And further south, in the United Arab Emirates, Trump’s name and image were removed from a $6 billion golf and housing complex in Dubai.

Posted by DownWithTyranny at 5:57 PM No comments: 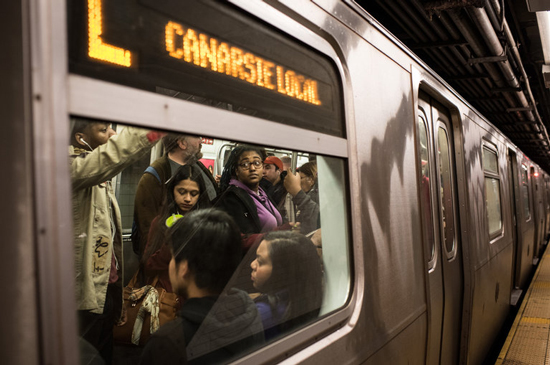 With the rapid gentrification of Williamsburg, then Bushwick, and continuing farther out on the line, NYC's L train has gone from a forlorn stepchild of the subway system to its "boom" line.

I'm hoping that by now urban geographer Jack Eichenbaum -- who's also the Queens borough historian -- needs no introduction to readers, and if he does, just click on the tag below. As I've noted, Jack's wide-ranging tours around NYC (I've toured all five boroughs except Staten Island with him), with their emphasis on the evolving forces of urban geography, have done more than I could tell to enable me to see how and why the city has developed and continues to develop.

One of Jack's choice tour modes is to devote an entire day to a single subway line, usually involving a half-dozen off-the-subway mini-walking tours along the route, giving urban gadders a sense of how variously the urban fabric both absorbed and was shaped by the line. He's probably best-known for what he calls his "signature" tour, "The World of the #7 Train," showcasing the diversity of what may be the world's most "international" rail line. But with Jack I've also toured the J train (from Lower Manhattan across the Williamsburg Bridge into Brooklyn and then Queens) and the Brighton line in Brooklyn (revisiting Howie's and my old lifeline into "the City").

Now, as I've noted here previously, Jack is taking on the L train, in advance of the year-and-a-half shutdown of its connection from Williamsburg to Manhattan, to make possible desperately needed reconstruction and repair of damage caused by the ravages of time and Superstorm Sandy. 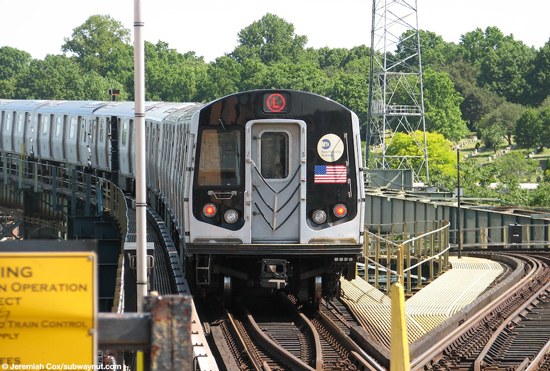 The Subway Nut's caption: "A Manhattan-bound R143 L train leaves Atlantic Avenue passing the tracks that lead from the L to the East New York L. (29 May, 2007)"

Since its expansion to 8th Avenue in Manhattan in the 1930s, the L line has stimulated gentrification along its route which traverses three boroughs. We explore the West Village and meatpacking district -- including a portion of the new Highline Park— and on to the East Village, Williamsburg, East Williamsburg, Bushwick and Ridgewood noting the continuous transformation of each of these neighborhoods, stimulated by the movement of artists.

This tour requires registration and payment in advance and is restricted to 25 participants. Fee $49

For a complete prospectus, email: jaconet@aol.com

The L train will soon be shut down for repairs; join this tour prior to that.

Obviously, it isn't going to be possible to do this tour again at least until the L line reopens, and even then, who knows? So if this sounds like something you might be interested in, now is the time to get on board. At last word from Jack, there's still space, but since we're talking about this coming Saturday, you need to contact Jack ASAP, either by e-mail or by phone (if you e-mail me at dwtkeninny@aol.com, I'll send you the number).

While the Manhattan connection is still operational, before it closes for post-Sandy reconstruction and repairs, rhe L train runs from Eighth Avenue and 14th Street crosstown under 14th Street, then under the East River to Williamsburg (Brooklyn) and then eastward, eventually hooking southeastward to Canarsie, within bus range of Canarsie's Jamaica Bay shore. [Click to enlarge.]