What The Hell Did They Do To Essaouira? 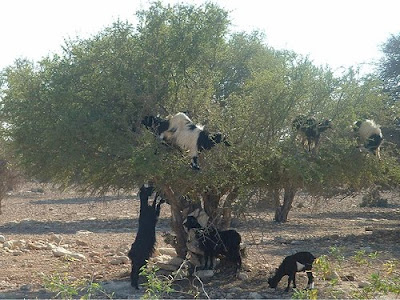 Roland and I were in shock yesterday when we walked into Essaouira. It has turned into a badly developed tourist hellhole almost on a level with Antalya in southern Turkey. Both of us tend to not buy into the constant carping by westerners that everything was better before and that all the favored places around the word have been changed for the worse. We've been scoffing at that widely held notion about Marrakech, which is still wonderful-- even if more overrun with tourists than ever before. But Marrakech is a big city with the capacity to gracefully absorb the kind of change massive tourism brings. Essaouira is a small town with less than 100,000 people. We looked around and said goodbye-- a once favorite place we won't be visiting again.

I was there for the first time late in the summer of 1969-- at the same time as Jimi Hendrix's short but legendary visit. It was sleepy and charming and I fell in love with the town. Since then no trip to Morocco was ever complete without a stop in Essaouira and I've recommended it to everyone going to Marrakech. It's a 3 hour drive and now they even have an airport.

Our last visit was in 2005 and we noticed that the tourist sector had expanded uncomfortably. More and more streets were dedicated to selling cheap tourist souvenirs and more and more of the city's energy was directed towards tourism. But it didn't really seem like much of a problem and Essaouira was as charming as ever. The ensuing 5 years, however, have taken a toll... a really big one.

It seems like once the only place to stay was the legendary Hôtel des Iles just outside the city walls. Now there's a hotel or riad in every vista and restaurants everywhere. Day trippers are omnipresent and Essaouira, at least on first glance, seems lost in the mess.

We stayed all day and into the evening. Our driver was shocked we stayed so long. He said no one does-- not ever. But by the end of the day our harsh judgments had softened. Lunch at Chez Sam's was as spectacular as ever, regardless of what the clueless travelers say about it deteriorating. We've been eating there for decades. NOTHING has changed. The unbeatable fish soup is exactly as delicious as it ever was. And so is the view over the harbor. 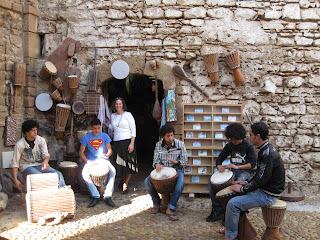 Our friends had never been there before and had no expectations and nothing to compare it to from its glorious heyday. They LOVED it-- as much as I had in 1969, and through the '70s, '80s and '90s. Walking along with walls in the back of the town were the same little shops and studios built into those walls we always loved-- and off the horrible main streets ceded to tourism. We came across a music store fronting on a little courtyard and the young proprietor, Hamid, gave us an astounding gambri recital in the shop and then invited us back for a great drum circle in the courtyard later in the day.

Even the argan oil business and the goats in the trees phenomena have become incredibly commercialized... but to a first-timer, as wonderful as ever. And, sure, I bought some delicious argan oil to bring home for some friends, even if it's three times as expensive as it used to be.

Hello, I just stumbled upon your blog and it brought back wonderful memories of Essauira which I had the good fortune to see this year. i wish I had seen it earlier when it was less touristy as you described it to be. Nevertheless, the place inspired me to write a song, that I would like to share with you. Here it is:

The winds blew hard in Essauira,
Clouds of gold hung in the air
The winds called out in Essauira
But, my love, you were nowhere.

Beyond the isles of purple stood
Old Mogador
Its prison walls now silent
dark tales locked forevermore
Down below the ramparts flew
A thousand gulls or two
Waiting for the old man and his
Brilliant boat of blue.


Fatimah raced the waters
Of the great Atlantic
A mother’s veil could not conceal her smile
Riders throned on horses
Decked in silk brocade
Roused the dreaming goatherd
Weary by the argan tree.