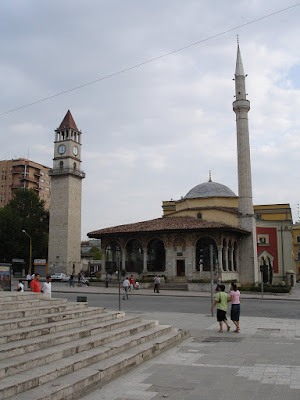 After living in cold, wet Rome for a while, the first thing you notice on arriving in Albania's one airport-- named for Mother Teresa, of course-- is that's the weather is positively balmy: much warmer, blue skies, sunny, no rain. Naturally that brings a smile to anyone's face. The airport was tiny and easy to navigate. Taxis downtown are supposed to cost $20 according to the guide books but they were only asking $17 (without bargaining or prodding). There was also a comfortable enough looking bus steps from the front door for $4 and we took that. It takes like 20 minutes to the center of time, walking distance from just about any hotel.

People look good and they look fashionable and healthy; nicely-turned out folks. They're friendly and helpful. Romans seemed too busy to bother with people asking directions-- or just frightened. Albanians are mellow and happy to help. We were surprised to see so many people-- at least in Tirane speaking at least rudimentary English.

It definitely a poor country, but one emerging from decades, or even centuries, of poverty. The city has an air of optimism; it's nice. We saw some huge "We love Obama" graffiti painted at the front of the university but we know the government really loves George W Bush, one of the few in the world that does.

The food is delicious. Everything is fresh and we were told everything is organic because the farmers are too poor to afford fertilizer. It's an inexpensive place as well-- and good deals abound if both looking for them. Unfortunately, everyone smokes. At least the country doesn't seemed plagued by religionist fanatics-- far less so than in the U.S. That's got to count for a lot! It took me less than 5 minutes to get the hotel to drop the room rate down by half (after they claimed there's an Albanian rate and a non-Albanian rate).

Tirane was easy to explore by foot and it was also easy to figure out how to use the buses. We also went for an hour minivan drive to Kruja, a more ancient city north of Tirane, built around the ruins of an old castle and rebuilt bazaar. We were the only tourists around and it was easy to get good prices on some really nice kilims.

Everyone says the "real Albania" is away from Tirane-- which was largely rebuilt in a Stalinist architectural mode in the 50s.Tomorrow we head out for Berati, south of here.

Posted by DownWithTyranny at 1:33 PM