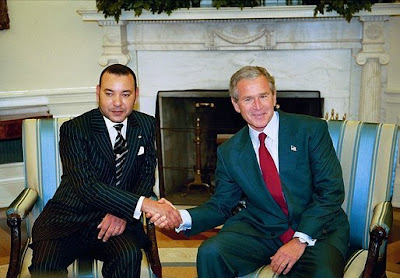 Last week our next door neighbor in Marrakech moved back into his place. He has homes all over Morocco and goes from one set of digs to another. There seem to be two or three just in Marrakech. He was here a couple weeks ago for the Marrakech Film Festival and I'm not sure why he's back so soon. I don't expect to see him-- other than on TV-- and I only knew he was back because of the huge number of heavily armed troops on every street and alleyway in Sidi Mimoun, our quiet little neighborhood. I had just been reading about him, thanks to Wikileaks.

You probably know me as a critic of conservatives but if you want to see me really get going, just start talking about monarchy. One of the highlights of the month was the video I saw of British students attacking the limousine of Queen Elizabeth's reactionary son-- purportedly the next so-called "king" of England-- and the ho he's shacking up with. The students were chanting "off with their heads," music to my ears.

But these immensely wealthy and powerful royal families are extremely committed to holding onto their positions at the tip-top of society-- and extremely dangerous. My friend Toon arrived in Marrakech a few days ago and he happened to tell me about how the journalists involved in the exposure of Prince Bernhard of Lippe-Biesterfeld as a Nazi were ruined and professionally destroyed. Bernhard, like England's weak-minded King Edward VIII, was a Nazi who conspired, in Edward's case, at the urging of his American Nazi wife, Wallace Simpson, with Hitler to bring fascism to his country.

[W]ith a belligerent new leader in Berlin threatening to rip up the Treaty of Versailles, those [Nazi] sympathies posed a serious problem-- particularly when King George V died in January 1936. Edward inherited the throne as a hugely popular new king-- and set about meddling in government policy. This was in defiance of all convention but that didn’t stop Edward. He took to calling the ­German ambassador directly-- a clear breach of constitutional protocol and one with serious practical consequences.

When Hitler made it clear he meant to send his forces back into the demilitarised Rhineland the government expressed its opposition. Edward should have stepped back. Instead he threatened to abdicate if Hitler’s advance was stopped, compounding the harm by phoning the German ambassador to tell him he had done so.

“The reassurances from Edward that Britain wasn’t going to fight were crucial,” says Professor Jonathan Petropoulos, author of Royals And The Reich. “Hitler had an ace in the hole, as we would say in American poker, knowing what he did from Edward at the time.”

In that context the abdication at the end of 1936 came as a godsend to the government. But even off the throne the Duke of Windsor posed an ongoing problem.

The FBI files show that at a party in Vienna in June 1937-- the month he married Mrs Simpson-- the loose-tongued Duke told an Italian ­diplomat that the Americans had cracked Italy’s intelligence codes.Four months later the Duke and Duchess paid a high-profile visit to Germany where the Nazi regime fawned on him. They met Hitler, who saw the value of ­cultivating an ally once so intimately involved with British affairs. Nazi propaganda chief Joseph Goebbels wrote of the Duke: “It’s a shame he is no longer king. With him we would have entered into an alliance.”

Even the declaration of war was not enough to make the Duke sever his Nazi connections. He was made a major-general and stationed in France but he continued to ­communicate with the enemy. In January 1940 the German minister in The Hague wrote that he had established a direct line of contact to the Duke. 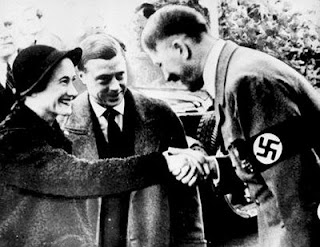 This line of contact proved crucial to the tragic fate of France. From the Duke the Germans learned that their plans for the invasion of France had fallen into Allied hands. This intelligence allowed Hitler to change his plans and catch the Allies by surprise. France fell.

The FBI papers also reveal that the Duchess of Windsor was in ­regular contact with the Nazi foreign minister Joachim von Ribbentrop, whom the Americans suspected of being her former lover. After the fall of Paris she and the Duke hopped from Biarritz to Madrid to Lisbon, shamelessly consorting with wealthy fascist sympathisers.

In Portugal Edward committed what may have been the worst act of his shabby career. In July 1940 the German ambassador in Lisbon passed a message to Berlin saying: “The Duke believes with certainty that continued heavy bombing would make England ready for peace.”

The former king was urging the bombardment of his own people.

Prime Minister Winston Churchill understood the danger he posed and was desperate to get him back to Britain, at one stage threatening him with court martial if he refused. In the end sending him to govern the Bahamas-- a humiliating posting which both the Duke and Duchess detested-- proved the most viable option.

But as Fulton Oursler was to discover the former king continued to plot from the governor’s mansion in Nassau, driven by a combination of his own Nazi sympathies and his belief that a strong Hitler could help him back to the British throne.

Shortly after he took up the post the Duke told one confidant: “After the war is over and Hitler has crushed the Americans we’ll take over. The British don’t want me as king but I’ll be back as their leader.”

Bernhard's p.r. machine always went to great lengths to portray him as a war hero and anti-Nazi fighter. But it was long whispered in Holland that the husband of one queen and the father of another, was a filthy Nazi traitor, member of the SS, and a member of the Nazi Party just before he married Crown Princess Juliana.

Back to my neighbor, Mohammed VI. He wasn't even born until 1963, long after Hitler killed himself. He became king in 1999 when his father Hassan II died and everyone says he's far more popular than his father. He inherited at least $2 billion but is said to have a piece on almost everything in the country. I have no way of knowing if that's true or not but I did notice another Wikileaks document that tarnishes Mohammed's patina pretty disastrously. Seems one of the things he has "a piece" of is his country's narcotics trafficking.

For the first time a U.S. official document speaks of the involvement of Morocco in matters of drug trafficking, citing officials of the Moroccan police working at Casablanca airport, who have been sanctioned in mid-August 2009 after they had arrested the son of the Senegalese president and the son of a Minister of the same country for drug possession.

• According to the report, King Mohammed VI had not appreciated the arrest of president's son and a Senegalese minister’s son without his knowledge and without prior consultation. The two Senegalese were released later and the police officers punished.

• The report also quotes an official of the Moroccan police in Casablanca, who was mutilated in the occupied city of Laayoune after he had implicitly accused the regime of being behind the drug mafia.

• Another report published by Wikileaks dated 2008 talks about the corruption that plagues the Moroccan army, especially among senior officials of the military institution. It says "the Moroccan army suffers from corruption, bureaucracy, lower educational level of officers and the continued threat of extremism of some elements." It added that "the head of the gendarmerie, General Hasni Ben Slimane "allegedly involved in corruption cases."

• Corruption, the report said, plagues the top military hierarchy in Morocco and General Benani turned into "a Baron of milk." the latter, taking advantage of his position as army chief in the occupied Western Sahara, manipulated markets to supply the army in milk, thereby making a fortune in billions of dollars, in addition to his involvement with other generals in doubtful markets of fishing permits on the coast of Western Sahara. He managed well, the report said, to build a palace for his family with money of corruption.

• Corruption also affects the officers who, to qualify for promotions, pay bribes to their leaders.

The Guardian reported earlier this month that the king's holding company, Omnium Nord Africain (ONA), "extracts bribes and concessions from real estate developers," something that no one familiar with Morocco would be surprised to hear.

Morocco's royal family is using the institutions of the state to "coerce and solicit bribes" in the country's lucrative real estate sector, according to a leaked report from American diplomats.

Information about high-level corruption involving the rulers of Washington's closest ally in north Africa was brought to the attention of the US consulate in Casablanca, Morocco's commercial capital, by a businessman in 2009, leading diplomats to describe "the appalling greed" of those close to King Mohammed VI.

According to the US report, decisions involving Omnium Nord Africain (ONA), a holding company owned by the king, are made only by the king and two of his powerful associates. "To have discussions with anyone else would be a waste of time," the head of the company is quoted as saying.

Royal involvement in business is a hot topic in Morocco but public discussion of it is sensitive. The US embassy in Rabat reported to Washington in a separate cable that "corruption is prevalent at all levels of Moroccan society."

Mohammed, who succeeded his father, Hassan, in 1999, is said to have cleaned up the royal family's act, but it appears he has not done enough.

"While corrupt practices existed during the reign of King Hassan II … they have become much more institutionalised with King Mohammed VI," one cable quotes a businessman as saying. Institutions such as ONA-- Morocco's largest conglomerate, which clears most large development projects – regularly coerced developers into granting beneficial rights to ONA, the businessman was quoted as saying.

I should add that almost every Moroccan I've spoken to says Mohammed VI is way better than his father, Hassan II, and that he's doing a lot for Morocco, even if he's also doing a lot for the family business. One guy I met even told me he can't blame the king for undermining Morocco's educational system-- illiteracy is still gigantic-- because how would anyone expect a monarchy to hand on to power if the populace was well educated.

Posted by DownWithTyranny at 2:00 PM

man, you don't know what you are talking about
listing an algerian papers as reference on the king
these wikileaks cables are out there and do no bring anything new that we did not know
as for Senegalese arrested at airport, it is politics, we do not want to piss off senegal and have them in the hands of Algeria. Do you get it?