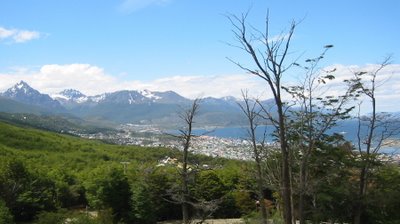 I usually like to travel to places with interesting and developed cultures. Places like India and Egypt, not to mention France and Italy, have drawn me ever since I was a kid. And my travels have always been in this direction. I've lost count of the number of times I've been to Istanbul, Morocco, Paris, Bangkok... I picked Tierra del Fuego as a destination for a very different reason. I guess I was looking for a complete dearth of culture. I was craving emptiness and desolation. The end of the world. And that's what they call this place... El Fin del Mundo. Next stop: Antarctica. It was settled by Argentina only 100 years ago-- a desolate and barren place, as a penal colony for the worst, die-hard criminals. I just wanted to unwind after the 2006 midterm elections.

It's summer now but it's mostly chilly and rainy. The sun goes down at 11:30 at night and rises around 3 AM. In the winter it's pretty much dark all the time and covered in snow. In the last 10 years, as the Argentine government has encouraged the development of the thriving tourist industry, the population of the town has doubled to 35,000.

Around a third of the tourists who come here-- 50% at the upscale hotels-- are just stopping for a day or two on the way to Antarctica. There are 600 dockings a year (obviously just in the summer season), mostly Chilean and Russian ships. 95% of the tourists are foreigners, mostly Europeans. It's too expensive for Argentines who would rather go to Europe or Miami for the same money. The average guests at Las Hayas stay for 2 nights (which means many stay for one night). I'm, as usual, an anomoly: I'm here for a week. The manager asked me why.

I'm here for the solitude, the stark beauty, the remoteness. It's what I thought it would be, albeit uber-exploitive. The town exists for tourists and everything is very expensive, above and beyond the fact that everything has to be air freighted in. Yesterday I took a ride on the old prisoners' train, the train of the end of the world. The prisoners built it into the forest so they could cut down trees to build the place and to use the wood for fuel. The train ride, into the spectacular Tierra Del Fuego Andes National Park, is one of the many tourist attractions. The train ride is kind of rinky-dink but it's actually worth the time because when the train dumps you out there's an alternative to having a car pick you up and take you home. You can trek. That's what I did. I figured I'd race off the train and beat the masses of tourists walking the pristine forest paths. I won the race-- by default. No one else was walking down any forest paths. The train emptied out and everyone piled into cars and buses and drove back to Ushuaia. I was very, very alone very, very fast. The train ride gets a B; the rest of the afternoon an A. When I get back home I'll insert some photos I took, mostly of the snow-capped Andes and of beautiful fjords.

By the way, there is also a newly developing winter season here-- which is when some Argentines do come to Ushuaia-- and that's all about skiing. In what they call summer, people kyak and canoe and golf and horseback ride and trek and even go camping. There are lots of boat trips. If it isn't raining tomorrow I'm going to go for a boat trip to the one island in the Beagle Channel that has penguins. Might as well, right? If you like outdoor activities and have lots of energy, this place is a paradise. Otherwise... well, you better be happy with solitude and silence.

Most of Ushuaia's streets are paved. The town basically has a main street, San Martin. One down is the street that fronts the harbor, Maipú. The rest of the streets parallel to San Martin are a pretty steep climb up. It's not something you'll want to do every day. It's steeper than San Francisco streets. One night I had dinner at Kaupé, purportedly the best restaurant in town. I had to climb 4 blocks from San Martin. It was... exhilerating. And the food was excellent, if over-priced and simple. The Chilean sea bass (they hate Chile so they call it something else) was the best I ever tasted. Vegetables are relatively rare here. The culinary features of Ushuaia are king crab, made every way imaginable, and black hake. The portions are huge and the fish is incredibly fresh. It's far from inexpensive, probably another reason Argentines don't come here. And the restaurants are far from sophisticated in their preparartions, the way they are in Buenos Aires. I remember when I first went to Las Vegas the restaurants were abysmal beyond belief. Now Las Vegas actually has a first rate restaurant scene. Maybe Ushuaia will some day too, though I wouldn't hold my breath.

A FEW WORDS ABOUT THE CHOW

It's hard to find a bad meal in Italy. But if you really want to, just go to Venice. The food scene is wretched. Venitian cuisine, of course, is completely fantastic. But Venice has sacrificed itself on the alter of lowest common denominator mass tourism. The restaurants are positively ghastly-- feeding stations for hordes of tourists, not any different from mass tourism traps anywhere in the world. Most tourists in Ushuaia eat in pretty dismal all-you-can-eat buffets. They're cheap and I suppose for some people the quantity is a good tradeoff for the quality. Afterall, we are in Argentina and the quality of the food is never really that bad anyway.

But with the exception of Kaupé and the Las Hayas dining room there was nothing I found worthy of writing home about (although modest La Casa de Mariscos is decent enough too, especially for all their wonderful crab meat dishes). Eventually I discovered a truly incredible place to eat in Venice-- the Cipriani Hotel's restaurants are absolutely sublime, as good as anything anywhere in Italy (even the snack bar serves only amazing meals). Well, good news if you're heading to Ushuaia: they have one of those too!

No, not a branch of the Cipriani; a restaurant that is remarkable for its impeccable standards: Chez Manu. About 7 or 8 years ago Las Hayas brought chef Emanuelle Hebert over from France to head their kitchen. The relationship didn't last long and Emanuelle opened his own restaurant about a kilometer up the hill. Forget that it commands the absolute best views in all of Ushuaia (no mean feat). The food is superb. Hebert is a chef who isn't just feeding some tourist horde he will never see again. He's competing for a position as one of the great chefs. Every dish is an artistic achievement. The other restaurants in town may have a decent cook here and there. Hebert is a chef, the real deal. It's not substantially more expensive than all the other places in town; they're all expensive. At least at Chez Manu the value is unquestionable.
Posted by DownWithTyranny at 11:53 AM