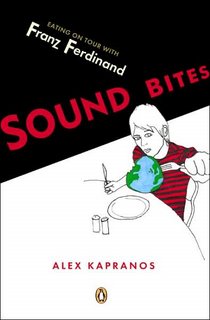 I'm agnostic on Franz Ferdinand's music. Their manager is an old friend of mine; otherwise I probably wouldn't have ever heard of them. I wound up liking "Take Me Out" well enough but it didn't wind up on my iPod's most-played list. I can't say I paid the Glasgow-based rockers much attention. After hearing an engaging and witty interview with lead singer Alex Kapranos today on NPR, I realize I need to go back and pay closer attention. Before he was a rock star, Kapranos was a chef-- as was Bob Hardy, the band's bass player; they learned all about restaurants from master chef Martin Teplitzsky who forged a kitchen team and played the Stooges and the Velvet Underground all day. And then Kapranos started writing a rocker's-eyed-view restaurant column for the Guardian which was released by Penguin this month as a book. (Here's an example of one of his columns/chapters, eating in Prague.) Sound Bites is all about the band's two and a half trips around the world, what they ate, who they ate it with and... well lots of color.

Just as I was about to switch the radio station to Air America, Kapranos, started talking about how to avoid the horrors of bad food on the road. I figured that had to be better than anything Ed Schultz was likely to talk about so I stayed and listened. A lot of what he talked about-- prodded, although not for no reason, by the host-- were "the weirdest things I ever ate." like deep fried insects in Bangkok (tasted fine, he said, but then you have to deal with the mandibles that get stuck between your teeth), bulls' balls in Buenos Aires (criadillas, worst thing he ever ate, kind of metalic-tasting), fishbrain bread in Finland and that Japanese blowfish that can kill you if it isn't prepared properly. And haggis.

Posted by DownWithTyranny at 3:20 PM