MY FAVORITE RESTAURANTS IN BUENOS AIRES 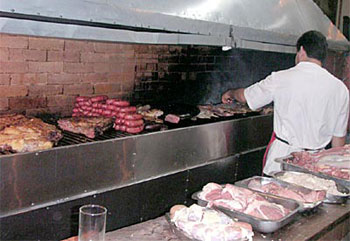 There's something perverse about a non meat-eater writing a guide to Argentine restaurants. Meat is the biggest deal down there. Everyone I ran into was so proud that Argentine beef is the best in the world-- and with the least cholesterol, no less! But non-meat eaters travel to Buenos Aires too. And, believe me, you can eat as well there as anywhere else. I'm not a vegetarian. I eat fish as well as vegetables. On the other hand, I don't eat sugar or anything made with flour (pasta, bread, cakes). And I love to eat. I'll do a specific paragraph below about the Buenos Aires veggie restaurant scene. But first let me say a few words about top restaurants in town.

As a prelude, I'll just mention that Argentina is a large and rich agricultural country with great quality food and a wide array of products. In the north there was tropical jungles and in the south, freezing near desolation. In between it's temperate and everything grows. Eating is good in Argentina. It might not be as cheap as it is to eat in Bolivia or Peru but for a tourist who could afford to get there, it's damn cheap. And the portions are generally really big. High quality, big portions, good prices. How you going to go wrong?

Generally recognized as THE best restaurant, Tomo 1 is in a hotel of faded glory, the PanAmericano (Crowne Plaza). Fortunately Tomo 1 isn't faded at all and it isn't of the hotel, just shares an address, Carlos Peligrini 521, right near the Obelisque, in what you might call the center of town (an absurd concept in Buenos Aires). Anyway, they serve lunch (weekdays) and dinner Monday through Saturday. It's been something of an Argentine institution since 1971 when the Concaro sisters, Ada and Ebe, opened it in a house in Belgrano. It moved to the Panamerico about 12 years ago. For an Argentine, 90 pesos for a meal is steep, like 90 dollars would be for an American in L.A. or NYC. But 90 pesos for us is around $30. And that's $30 for the best restaurant in town where every dish is mouthwatering and designed to be absolutely perfect. One sister does lunch and the other does dinner and their philosophy places flavors above all other concerns. Everything I ate there was delicious and nothing came to the table that you could get anywhere else.

If another restaurant gives it a run for its money it would be the newer (2004)-- and way hipper and more glitzy-- Casa Cruz in Palermo. The place blew me away to the point of doing something I had never done before in my life. I photographed the menu; take a look. This place is all about unique combinations of ingredients. Frommer or Fodor or something like that claims this is the best restaurant in town. I'm not going to argue with them either. It's not easy to get into though. I was unable to get reservations twice. They serve 'til 3AM or until you're finished eating.

Most concierges who you ask for the best restaurants in town will say there are 3 and add in Sucre. Sucre is excellent, but in my opinion not on the same level as Tomo 1 and Casa Cruz. It's bigger and not quite as smooth as the other two. The food's very good but not as unique or memorable. It's kind of out of the way too.

In fact, I think I'd put Oviedo, a posh Old World seafood restaurant in Barrio Norte, in as my third favorite restaurant, over Sucre. It's clubby and feels fancy but it was actually pretty relaxed and the food was superb, almost like you're eating in a grand restaurant in Spain rather than in Argentina. (And even though it's "officially" a seafood restaurant, people say they have incredible beef and lamb dishes as well.) Everything is done with a lot of flare.

Most of the tourists I talked to missed these incredible world class restaurants and were delighted to have their meals at Buenos Aires' traditional grilled meat restaurants, parrillas. People I met raved about El Obrero in La Boca and La Brigada in San Telmo as the best parrillas in town. After that everyone's second favorite choice are the omnipresent pizzerias and Italian restaurants. They literally are everywhere. Buenos Aires is almost as Italian in culture and character as it is Spanish. Buenos Aires also has Chinese restaurants, Thai restaurants, German restaurants, French restaurants, etc. And plenty of MacDonald's and crap like that too.

It wasn't hard finding good vegetarian food either. Although my favorite veggie (and organic) restaurant was Bio in Palermo, the "veggie scene" is centered around a store/restaurant called La Esquina de las Flores. Since I rented an apartment for my first week in Buenos Aires this was a place I could buy some basic groceries, although not fresh produce. And they have great take-away. The women who run it were mostly humorless, forbidding, harried and unfriendly. Right next door is another veggie place, Lotos, which is kind of Chinese veggie. Florida is the huge pedestrian street in the center where everyone walks and shops. There's a huge veggie cafeteria called Granix (open for lunch only) where you get as much as you can eat for $7. It isn't high consciousness food but it's good and tasty and a great place to go if you're hungry. I heard of 2 or 3 other veggie places that I never got to check out (including a Hare Krishna place I didn't want to check out, sugar being the main staple of the Krishna diet... which explains a lot).
Posted by DownWithTyranny at 5:07 PM

Nice post. will be traveling to Bueno Aires to check out their marvelous food next week! keep it up. =)

I had lunch in a restaurant called ‘Wokishop’ in Buenos Aires between Reconquista and Avenida de Cordoba.
The menu comprises of a combination of Asian cuisines.
The food is really tasty, healthy but cheap.
I also enjoyed the atmosphere: the Italian manageress wsa really friendly and helpful and the place had a nice vibe to it.
There is also a wide variety of vegetarian option, which is quite difficult to find in meat-eating city like Buenos Aires.

I post a new restaurant in town, Greek Food by greeks.

I went to a restaurant in Argentina named xlpharmacy, and it was really excellent, I loved Argentina's food...