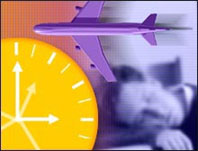 Today's Washington post, on one of the busiest flying days in history, has a story about the deadly impact of jet lag. The story is based on an academic study of mice which seems to point out that elderly mice have a great accelerated death rate from too much jet lag.

Back in 1969 and 1970 I drove from London to India and back over the course of two years. No jet lag that way, of course. But I always noted that tourists who had flown in-- especially to India-- were a mess. I chalked it up to being unable to cope with the sudden upending of their cultural universe. But, of course, the effects of jet lag can be very disconcerting.

I got home yesterday after two flights from Buenos Aires (around 10 hours) and Dallas (around 3 hours). I'm not jet lagged at all. That's because most of the trip was north-south, not east-west, which means I didn't crossed many time zones, the cause of jet lag. The Post article is worth reading and it talks about ways to ameliorate the problem (including wearing sunglasses when you arrive at your destination!). 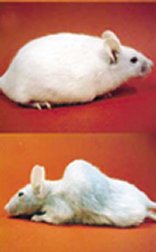 When I had to travel to Europe on business frequently I got used to flying on an overnight British Air flight from Los Angeles to London, first class in a fully reclining flat bed. It didn't eliminate jet lag entirely but, at $10,000 a pop, it seemed to make it a lot less burdensome. I could usually be ready for a business meeting within hours of arriving. Before I found a corporation to pay for that I used to fly economy class-- my first trip to Europe (on Icelandic Air) was $99 to Luxembourg-- I was a walking disaster for at least a day or two before I could adjust.
Posted by DownWithTyranny at 8:05 AM