PARAGUAY FIRST IMPRESSIONS-- A STEP BACK FROM THE GLOBAL VILLAGE 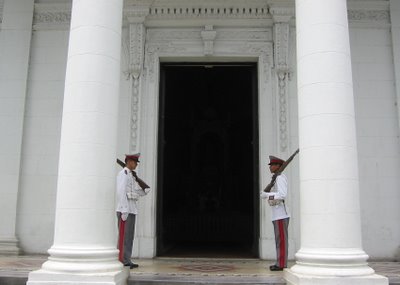 When I made my big VW van trip to India in 1969-71 I remember this bizarre sensation I got sometimes, especially in Afghanistan and Nepal, that I wasn't merely traveling in space but also in time-- backwards in time. Like that first day in Herat, especially after smoking hash stronger than acid with some tribal elders, I started thinking I was back in Biblical times. Nothing to do with anything about the Bible, just it was a long time ago.

Well, it's almost 2007 and... today I was feeling like I was in pre-call center India circa 1970. Ever since I left Buenos Aires I've been feeling more and more like Joseph Conrad... descending... or a Paul Bowles character. Here are some notes I jotted down on the bus today after I had somehow managed to get out of Brazil and into a more-chaotic-than-normal Paraguay:

Ciudad del Este is one of Paraguay's two portals to the modern world, a border town on the bank of the Parana River across from Foz Iguassu in Brazil. You'd think it would be more... um... cosmopolitan than the rest of the country. If it is, I'll be pre-Biblical in no time at all. This is a foresaken hellhole with garbage-strewn streets and the air of decay, really seedy decay. All the strides Brazil and Argentina have made to become thoroughly integral parts of the 21st Century global economy... well, I'm not even seeing a baby step over on this side of the Parana.

This morning I woke up in the Tropical Hotel Cataratas inside the ecological Iguazu Falls National Park that spans chunks or Brazil and Argentina and which I plan to write about at great length when I get home and can show you my wonderful photos. But now I'm on the other side of the Friendship Bridge, after great exertions. It feels like I put enough time and energy in to have gone hundreds of miles instead of a dozen. But in many ways it feels not like a dozen or like hundreds but like thousands of miles. It sure ain't Kansas... nor even the most extreme and distant corners of Brazil or Argentina. And no one has ever mentioned "ecological" to the folks hereabouts, believe me. The sky darkened ominously as we crossed the border and it started to rain-- the first rain I've seen since arriving in South America.

Early this morning CNN informed me that there is rioting in Asuncion, the capital. It wasn't anti-American or even anti-Bush and I figured it didn't look threatening enough on tv for me to change my plans. When I eventually got to the bus station in Foz I was soaked in sweat and disgruntled. It was then that the bus company agent informed me that the Brazilian buses were refusing to cross the border because of strikes and demonstrations in Paraguay. (A little aside: I could have saved myself a lot of hassles. First off I should have taken a plane. It costs $45 from Ciudad del Este to Asuncion on TAM. I had called TAM, a Brazilian airline, and asked if I could fly from Foz to Asuncion. They said they had no direct flights but I could fly from Foz to Sao Paulo to Asuncion for $900. They neglected to mention they fly direct from the airport 10 miles from Foz, just over the Brazil-Paraguay border. Second, I should have taken a taxi from the hotel to the bus terminal instead of 3 buses, but the taxis-- and all other services--have special prices for foreigners. A Brazilian would pay around $15. For a foreigner it's $75. I'll get more into this when I write about Iguazu after I'm back in the U.S.)

Anyway, before I interupted myself, I was saying how the bus agent explained there would be no bus to Asuncion. However, he offered to take me in a couple of private cars to Ciudad del Este where there is a bus going to Asuncion. Okey-dokey. He didn't even charge me and I wound up in some kind of a parking lot in this filthy squalid dump on the border and then on a small, uncomfortable, freezing bus with a boisterous Brazilian couple. It only went in second gear. Eventually he stopped at an actual bus terminal and the bus filled up with people going to their capital city. Maybe the extra weight allowed him to get into the higher gears. It was a 5 hour trip.

I felt like I was back in India: scrawny chickens, scrawny cattle, scrawny dogs, scrawny children all over the roads. Verdent green everywhere, tropical vegetation, smoke from fires permeating everything... hovels lining the 2 lane highway (Paraguay's best road). This is the developed part of the country. Up north, where Bush's ranch is, it's supposed to be backward, really backward. Anyway, down here in developed Paraguay there were virtually no cars, just trucks and buses. India has come a long way; Paraguay hasn't.

Asuncion is quite a step up from what I just described-- but hardly a modern city; hadly a city at all, in fact. There are open sewers where sidewalks should be. I'm in the tropics. It could be Africa. It sure couldn't be Buenos Aires or Montevideo.

I did manage to find a haute cuisine restaurant and it was completely delicious-- Mburicaò. I had a grilled local river fish on a bed of lightly curried vegetables and it was fantastic and there was lots of it. It was like $12. No one spoke English and there was no menu in English. No one speaks English anywhere in Paraguay so far. Oh, the guys at the desk of the hotel speak English-- a bit. I have a feeling that's the only qualification needed to get the job-- a little English. I mean it is a Sheraton.


UPDATE: ASUNCION LOOKS BETTER IN THE LIGHT OF DAY

It's still very much a third world city, but the nice bright sunshine helps highlight some charms. And this Sheraton I'm at isn't really in the center (where the open sewers have been paved over). I can see that my hopes to actually visit the Bush ranch are unrealistic. There are no roads and the few people in the lightly inhabited area don't speak Spanish, just Guarani. There are no buses or anything like that that get anywhere near the region and I was told that the only way to get close to it is to rent a private plane-- or hike... for a couple of weeks. Every single person who I discussed it with have told me I would be killed if I tried to go there. I think I'll try the downtown siteseeing instead.

India is more interesting. I did manage to see all the mains sights in Asuncion. I probably inhaled enough toxic fumes to have taken 5 years of eating raw food and taking 30 supplements a day off my lifespan. The heat and humidity are staggering. The traffic congestion is beyond anything conceivable in L.A. 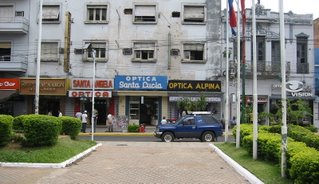 There is apparently no such thing as zoning in Asuncion. It's kind of interesting; it's the most mixed used place I've ever been to. Everywhere you look you see a meticulously kept colonial mansion--and that's not a style; it's a house built when Asuncion was the capital of the southern part of the Spanish Empire-- delicately painted sky blue or rose pink, sitting next to a greasy car repair shop/junk yard with rusting hulks of trucks in front of it. And next to that an optomitrist, a clinic, a mall and 20 kiosks. Speaking of optomitry, it is apparently the primary profession hereabouts. Remember how I mentioned that Buenos Aires has more hairdressers per square inch than any other place on earth? Asuncion has more optomitrists than any other place on earth. I will insert a photo here when I get home. I took it from the Plaza de Heroes and it shows 8 optomitrists' shops in a row. And every block seems to have one or two. If I had time I would investigate.

I took a city bus downtown. It costs 2,100 guaranis. There are 5,360 guaranis to the dollar. The buses, belching heavy black exhaust, crawl along and never bother closing their doors. People jump on and off at will-- including vendors selling food and drink and whatever else you can imagine. Everyone seems to agree I couldn't get within 100 miles of the Bush estate and that if I did I would never be heard from again. Apparently there's a "low level" rebellion going on in the region and the U.S. has a base up there "training" Paraguayans to exterminate the locals fight the terrorists. Maybe we can ask Jane Harman to look into that.

I am leaning toward heading off to Iberà, a swamp near (relatively near) Posadas in Agentina. It's supposed to be the Serengeti of South America with more species of animals than anywhere else in the hemisphere. The drawback is that there's no easy way to get there-- from anywhere. Next week I'm going to Tierra del Fuego. I met some Brits in Iguazu who had just come from there and they said it was zero degrees. I'm not sure if that is centigrade or fahrenheit-- but does it matter?
Posted by DownWithTyranny at 6:24 PM

Hey Howie, this was really interesting about Paraguay, I had no idea.

Great reading about your trip. Some friends of mine have been traveling about South America too- check out their blog.

Your trip gets more and more fascinating. I admit to a lot of envy at the places you are seeing and and impressed by the perspective you bring because of your personal history.
I am assuming that when the locals told you that heading out to the supposed Bush ranch on foot would mean death by paramilitaries? Or are there also perils like animals, other people either hiding, wanting to be left alone etc...It certainly makes one curious but why tempt trouble?
I am looking forward to your pictures very much. Did you say you got some at Ciudad del Este?

I didn't take my camera out at Ciudad del Este. It would have been tempting fate. The place has the aura of a den of thieves. And there was nothing to take pictures of-- except the squalor. I'm about to leave for Iberá in a few hours but I'm tempted to write a quick blog about the other side of Paraguay before I head out from Posadas.

Hi Howie, it's a shame I didn't read your blog before, l live in Asuncion and maybe if I knew that you going to come I would take you to the best places in Asuncion. People that speak only english here feels complete lost as a tourist, even the common locals don't know how to tell you where are the best places or even tell you what to do. I have to clarify that I'm paraguayan and I lived my entire life here, I went to the States, Argentina, Brazil, Mexico and know very well the cultural differences. What you said is very true, but what I don't agree with you is have to write the worst things of the place instead of write about the best things of a place. As I said before, I could have showed you the real Asuncion.

Sorry I didn't meet you when I was in Asunciòn, Osval. You're 100% correct about a foreigner being lost there without someone to show them what's going on. Oh well! I'm in Agentina now and I can`t imagine when I will see Paraguay again-- unless I get a solid tip about where the Bush estancia is.