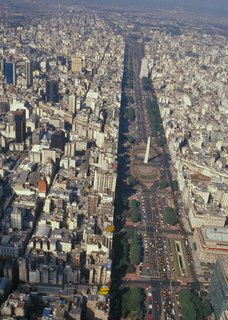 When I flew into Buenos Aires from the U.S., the plane didn't fly over the city and I never got to see a bird's eye view. I walk a lot. Porteños I talk to are amazed that I walk as far as I do-- like from San Telmo to the outer reaches of Palermo. Buses, taxis and the subway are cheap and efficient but I love to walk and always find it a good way to get to know something of a city. My guess is that a walk from Bio, my favorite veggie restaurant, way out on Humboldt in Palermo to San Telmo is at least 4 or 5 miles. Flying over Buenos Aires after my trip to Corrientes and Misiones provinces I was stunned by the staggering giganticness of the city. It just goes on and one and on. There are 36 million people in Argentina, with lots of wide open spaces. 11 and a half million of them live in the Buenos Aires metropolitan area.

In Manhattan all my friends think I'm crazy because I love walking from the 50's down to, say, Little Italy. I get to see a lot of Manhattan. But not all of it-- and none of Brooklyn, the Bronx, Queens or Staten Island. Buenos Aires is much bigger; much, much bigger. And remember what I said about how Buenos Aires is such a vertical city with everyone living in apartment buildings? That would be in the city center areas. There's plenty of horizonal living in Greater B.A.

Argentina is also a very large country. It's not like any of the European countries, where you can drive anywhere in a day. Not by a long shot. The nonstop flight from Buenos Aires to Tierra del Fuego is around 4 hours, about the same as Los Angeles to Atlanta. And from Jujuy in the northwest down to Tierra del Fuego... my guess is that it's further than from Maine to San Diego. Unless you have a lot of time and love long distance driving-- and I've met quite a few travelers who do and who are revelling in their Argentine vacations-- you have to fly. The problem with flying around Argentina is that it's expensive, for many people prohibitively expensive.

Every Porteño I tell I'm going to Tierra del Fuego lights up and tells me how wonderful it is. When I ask them if they've ever been, they all say no. I still haven't met a single Argentine who's ever been there. As one of my friends mentioned "It costs less to go to Miami or London. So..."

For foreigners there is a way around this. In Latin America there are a lot of things stacked against tourists, even to the point of hotels-- not to mention national parks and things like that-- which charge more to foreigners than to natives. In a few cases, they even charge more to certain foreigners (i.e.- like those who live above the equator) than to others. But there is one little, or not so little, instance where the situation works in reverse. You know what a Eurail Pass is, right? Aerolinas Argentinas, the national airline, offers something like that-- a mindblowingly low rate for internal travel. The catch: you have to fly into the country on that airline. And that isn't always convenient or even cost-effective (especially since Aerolinas Argentinas isn't hooked up with any of the big airline networks that share mileage plans).

I stumbled upon a way around that little catch. Uruguay is right across the La Plata and if you're in Buenos Aires why not visit Uruguay anyway-- Colonia, Montevideo and Punta del Este? I took a pleasant one hour ferry trip over to Colonia and then a bus to Montevideo. There are also ferries direct to Montevideo. After seeing a bit of Uruguay I took the quick, cheap flight back to Buenos Aires. And that meant I flew into Argentina from a foreign country, making me eligible to fly anywhere inside the country for next to nothing.

My next travel tip will be how to trick the nasty Brazilians into letting you into their over-priced country.


UPDATE: AND THE COUNTRY AND CITY AREN'T THE ONLY THINGS THAT ARE BIG AROUND HERE!

To answer an e-mail from a friend, it isn't just Buenos Aires, the metro area, and Argentina, the nation, that are big. The portions in restaurants also seem to be very large. Aside from the all-you-can eat buffets, even the chic restaurants serve hefty courses. Food is plentiful and the folks down here like to eat and they like to party. Like I mentioned earlier though, you don't see the kind of obesity in the people that you see all over America or, more and more, in Europe.
Posted by DownWithTyranny at 6:04 AM

Chile is just as expensive as Brazil. Argentina is the real bargain, as far as the rate of exchange goes.

Joe Max has that right. And it's more than just the exchange rate, basically 3 Argentine pesos for a U.S. dollar. The buying power of a peso is more or less the same as the buying power of a dollar in terms of local goods and services. Basically, that means you triple your money by coming to Argentina. And because Argentina has a strong consuming middle class, the values are incredible.

Now the exception-- or, more accurately, the partial exception-- is for goods and services specifically meant for rich foreign tourists. The 4 Seasons and Park Hyatt, which cater primarily to wealthy tourists and businessmen charge international rates. Other than that, everything is a bargain.

Last night I ate in one of the 2 or 3 best restaurants in Buenos Aires, Casa Cruz, a highly sophisticated hot spot with an internationally acclaimed chef. If Casa Cruz were transported to L.A. (ambience, menu, service, vibe, quality of food, etc) it would immediately be on a par with the Water Grill, Michael's, Chinois on Main, etc. Yet my incredible, memorable dinner cost me 90 pesos ($30). In L.A. it would have been a meal I would have been lucky to have paid $90 for.

The taxi ride from my hotel to the airport just now cost me 10 pesos, just over $3. It's the domestic airport, comparable to Burbank or LaGuardia, rather than LAX or JFK, but when's the last time a taxi cost you $3 (or even 10)? Groceries, bus and subway fares, bottled water, clothes... all cheap. On the other hand, renting a 4 wheel drive vehicle with a driver to take you to a swamp in the middle of nowhere... only rich tourists do that, and you pay what you'd pay in America.