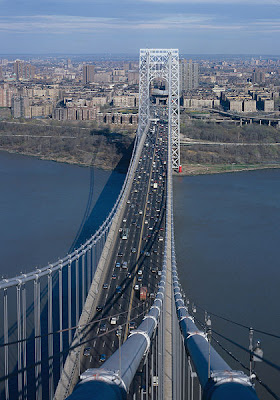 Since I last wrote, the New York Transit Museum tour schedule has been announced (you can find it on the Calendar of Events page of the website, and the early registration period for members is in full swing. As I mentioned, all the regular tours on the fall schedule are offered at least twice, and some of the especially popular ones, which in the past were generally already offered more than once, are offered even more often.

The four I pounced on start with two led by peerless "urban geographer" Jack Eichenbaum. With Jack you not only begin to understand why neighborhoods and regions have developed the way they have, but you see things you just wouldn't see with less tuned-in tour leaders.

Constructed in a once squalid are known as the "Tenderloin," Penn Station united rails from Long Island, New Jersey and points south that previously terminated on the other side of the Hudson. Urban geographer Jack Eichenbaum will lead this walking tour through the remnants of the neighborhood's past and look at its proposed future, including the Farley Post Office building, the historic Hotel Pennsylvania, Herald Square, and "Koreatown."

Since its expansion to 8th Avenue in Manhattan in the 1930s, the L line has stimulated gentrification along its route. We will explore the West Village and Meatpacking District -- including a portion of the new Highline Park -- and on to Bushwick and Williamsburg, noting the continuous transformation of each of these neighborhoods.


By the way, Jack has announced some additional fall tours of his own, including an on-the-ground survey of the area he's currently watching with perhaps the greatest fascination, What's New in Long Island City? (Saturday, October 22, 11am-1pm) and one in his home area, which has already undergone an unrecognizable transformation, Religion on the Land: Polytheologic Flushing (Saturday, November 12, 12n-2:30pm). I've already done a fair amount of wandering in both Long Island City and Flushing with Jack, and I can assure you it's a special experience. (I would definitely do LIC with him again if I weren't already registered for the Municipal Art Society tour of the Chinatown-Little Italy Historic District at the same time.)

Jack also invites us to "hold the dates" for a pair of cold-weather tours ("both partially indoors"), with details to be announced: Keeping Off the Streets of Midtown Manhattan (East Side) (Saturday, December 3) and Flushing's Chinatown (Sunday, December 18).

The other two tours I couldn't resist are:

Seventy-five years ago the Independent Subway System was extended from Jackson Heights to Jamaica under Queens Boulevard, now a shopping mecca. Ridership at Forest Hills station now ranks 40th out of the system's 468 stations. Ride sections of this line and walk its surrounding neighborhoods with subway historian and retired LIRR manager Andrew Sparberg.

Two perennial favorites are offered four times each but are so popular that they're likely still to be tough to book.

At some point I will definitely do the CONEY ISLAND YARD tour again, and prepare for it better by schooling myself on the various kinds of subway cars that are serviced in this giant maintenance facility, and how exactly they work, to better appreciate this unparalleled close-up view of how that maintenance done. But the pièce de résistance is the visit to the tower where New York Transit personnel oversee the extraordinary coming together at Coney Island of four separate subway lines.

This is a must. It's being offered Tuesday evenings, 6-8:30pm, on September 13, October 11, November 8, and December 13 ($30 for members, $50 for nonmembers), and you're going to need photo ID -- they take security very seriously at the Coney Island Yard. (Anyone who didn't understand how essential the subways are to the life of the city got a demonstration when they were shutdown in anticipation of Hurricane Irene.) 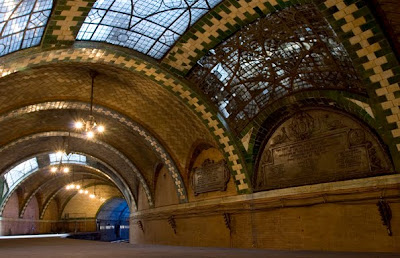 The visit to THE JEWEL IN THE CROWN: OLD CITY HALL STATION is also enormously popular. When the old City Hall station was built, it was the anchor of the original subway line, and the station was built on a decorative scale that was never repeated. You're really traveling back in time here, and the station may be less "wow"-inspiring than you expected. (For one thing, it's not that large. The trains of the time were only five cars, cars that were much shorter than later ones.) But more than anything, you're seeing history here. The station was abandoned both because of lack of use and because the extreme track curve on which it sits could never have been adapted to handle the much larger, multiple-trains that became standard on the NYC subways.

You can glance at the station by staying on a no. 6 train after its last southbound stop at Brooklyn Bridge, when it makes the loop that turns brings it onto the northbound local track of the station -- and you are allowed to stay on the train, we were told, unless Transit personnel tell you the train is going out of service -- but you won't see much. The tour is the only way to get out onto the station platform and actually see what there is to see. This is the one NYTM tour that's members only, and may be itself be reason enough to join, though there seem to me plenty of other reasons, not least all those other tours. (Note that in addition to using my early-registration privilege, I paid $120 for my four tours, which for nonmembers would be $180.)

And oh yes, as I mentioned last time, there's one more of the museum's famous day-long NOSTALGIA RIDES, once again riding the old IRT lo-V cars up the Lexington Avenue line to Woodlawn Cemetery in the Bronx (Sunday, October 23, 10am-3pm; $35 for members, $50 for nonmembers). This time it's offered as a package deal with a box lunch and a tour of this final resting place of some of New York's Fanciest citizens (with cemetery architecture by some of New York's fanciest architects).

And I haven't even mentioned the museum itself, in downtown Brooklyn, which is terrific, both for its permanent exhibitions and the special ones offered for limited periods. (I was grateful at the two cracks that the summer Nostalgia Rides that departed from the museum gave me at the incredible exhibition on the Triborough Bridge, an amazingly thorough documentation with photos, archival documents, models, plans, etc. of how the concept for this complex of structures took shape and how it was executed, including what it displaced.)

Nor have I mentioned the numerous other special events, including all sorts for kids (many of whom are incredibly knowledgeable about the subways; at the Coney Island Yard, the youngsters on the tour knew everything about those trains!). Or the Museum Annex at Grand Central Station, which has free admission and is currently hosting an exhibition called "The Once and Future Penn Station." If you're visiting the city, you should definitely try to get to one if not both locations, and if you live here and haven't been yet, you really should go. For basic information, the Transit Museum website is a great starting place.

Well, I've gotten my copy of James Renner's Washington Heights, Inwood, and Marble Hill, and it's a terrific book. But it didn't register for me before that it's part of the valuable Images of America series, which means it's basically a book of photos. There are lots of fine historical photos, informatively captioned, but alas no, it's no substitute -- as I was hoping -- for the tours I'll have to miss, owing to schedule conflicts, in this six-Sunday September-October series offered by the official historian of Manhattan Community District 12.

Washington Heights and Inwood (WAHI) are communities that have, over the years, gained recognition in massive demographic changes. People from other parts of the city are visiting and moving here because of its affordable housing and beautiful parks. These tours will demonstrate to the resident and visitor alike how upper Manhattan has changed and adapted to suit the needs of its new inhabitants and tourists.


You can find the full schedule with tour descriptions here. There are parts of the city it's easy to find covered by multiple walking tours; these aren't among them. The tours on the schedule ($15, $10 for students and seniors) are:

I'm always wondering how I can avoid long travel times. I spend so long looking for cheap tickets, but they always are for the longest routes. Does anyone have good suggestions?

Most travellers head towards NY for their perfect holiday trips. There is so much to do in this astonishing US city. Just a cheap flight to New York and see for yourself how stunning the NY Transit Museum Tour is.