Best And Worst U.S. Airlines-- Short Version: They're All Pretty Bad These Days 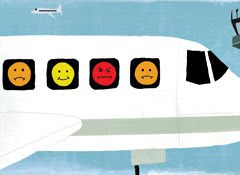 The June issue of Consumer Reports rates the best and worst U.S. airlines. The best news didn't have anything to do with the sorry state of the collapsing airline industry itself but with the fact that the Department of Transportation announced a series of very minimal protections for consumers in April, including:

• Disclosing fares and fees. Airlines and other ticket sellers will be required to disclose all fees, including baggage charges. All fees and taxes must be included in advertising.

• Refunding baggage fees. Airlines will be required to refund those fees if your bags are lost.

• Extending tarmac delay rules. The DOT's 2009 ruling on extended tarmac delays is being strengthened and expanded. The current regulation requires domestic flights to return to the gate after three hours, and passengers must be provided with adequate food, water, working lavatories, and medical treatment. This rule will now include U.S. carriers operating international flights, as well as foreign airlines operating out of U.S. airports.

• Compensation for bumping. If you are involuntarily bumped from a flight, new regs will provide increased compensation, in some cases doubling the current amounts.

• Limiting fare increases. Airlines will not be allowed to raise your fare after you’ve purchased your ticket.

All stuff we used to take for granted... used to. Anyway, the Consumer Reporters survey included almost 15,000 readers and they were not kind. Eight of the ten airlines rated received low scores for seating comfort-- exceptions being JetBlue and, incongruously, since their seating sucks, Southwest. These two airlines also topped the overall list.

Other quality-of-flight measures also got low marks from our readers, including cabin-crew service, cleanliness, and in-flight entertainment. The proliferation of added fees further contributes to passengers' low opinion of today's flying experience, and even to their decision of whether to fly at all, as we explain in Carriers continue to squeeze with fees.

But some carriers have done a better job than others, as evidenced by a wide difference in overall satisfaction scores, from Southwest's lofty 87 to US Airways' lowly 61. Southwest was the only airline to receive top marks for check-in ease and the service provided by its cabin crews. Passengers also gave the airline high grades for cabin cleanliness and baggage handling. The latter might reflect the fact that Southwest is the only airline we rated that lets you check two bags free of charge. But bags three, four, and beyond will cost you $50 each. And like most other carriers, Southwest charges extra for items over its size and weight limits. (Our survey was conducted before Southwest's well-publicized problems this past April with cracks in several of its planes.)

JetBlue, which ranked second in overall satisfaction, was the only airline to outscore Southwest for seating comfort, possibly because it gives passengers more room than they're accustomed to in this era of tightly packed planes. JetBlue's coach seats are 32 to 38 inches from the seat directly ahead, while coach seats on most other carriers are just 31 inches apart. JetBlue was also the lone carrier on our list to earn top scores for in-flight entertainment; its seatback TV screens offer passengers 36 channels.

Bottom-ranked US Airways occupies the same unenviable spot on our list as it did in 2007, when we last assessed airlines. In addition to its low overall score, survey respondents gave it the worst marks of any airline for cabin-crew service.

Our own annual airline rating places Delta at the bottom of the heap again, but the came in 8th (of 10), worst of all the majors. Here's a little clip that only takes safety into account, for those who worry about that kind of thing:

Posted by DownWithTyranny at 5:11 PM

but do you have any choice?

I'm always wondering how I can avoid airline fees. I spend so long looking for cheap tickets, I'm not inclined to spend more money. Does anyone have good suggestions?