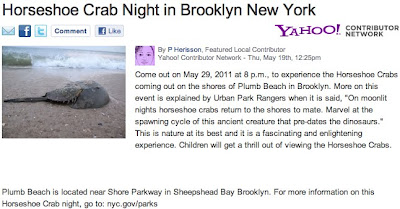 You should be able to click on this to enlarge, and if you do, I won't have to repeat what it has to say about horseshoe crabs. Oh, I may anyway.

I didn't see the above Yahoo notice until just now, when I was scrounging online for "illustrative" material regarding Brooklyn's Plum Beach. (You'll notice here that it's sometimes spelled "Plumb Beach," but the general usage seems to be that it's Plum Beach, named for beach plum trees that are supposed to grow in this marshy area on Rockaway Inlet, east of the mouth of Sheepshead Bay (and, therefore, of the eastern extremity of Coney Island). But it gives a pretty description of the event I surprised the heck out of myself by taking such a journey from the conceptual-theoretical stage ("you know, I could actually do this, and it might be interesting") to the actual-journey stage. It was a journey that, from way-northern Manhattan, took more than the two hours I had allotted on the route I'd worked out (the no. 1 train to the no. 2 train to the B44 Limited bus to its terminus, then hoofing it) -- almost two and a half hours, in fact.

And at the several "junction" points, as it became clear that I wasn't going to come close to making it by 8pm to this place I'd never in my life heard of before let alone been to, I told myself that the sensible thing to do would be to chalk it up to a noble effort and head back home. Some other time I could complete the journey -- the beach, after all would still be there.

Yes, but would the horseshoe crabs? 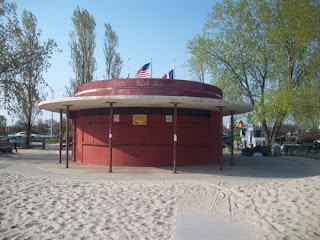 But I didn't, and at nearly 8:30, when I finally saw up ahead what looked to be a bunch of people gathered in front of what I seemed quite likely to be the Plum Beach Comfort Station, the designated meeting place, I began to imagine that perhaps I hadn't entirely missed the event. And indeed I hadn't.

I missed the start of Urban Park Ranger Andrew's discussion of horseshoe crabs, explaining that their habitat extends . . . oh, I don't remember, but something like from the Gulf of Mexico all they way up the east coast of North America (there are also Pacific horseshoe crabs, we learned, on the west coast of North America and the east coast of Asia), and whatever it is, it's also a basic bird migration path, because horseshoe-crab eggs, which apparently chock full of body-building fat and protein, are super-good eats for our feathered friends. And in our area, the salt-marsh beach of Plum Beach (Andrew thinks of the whole coastal region that is now Greater New York as essentially a giant salt marsh, albeit a now-much-compromised one) is prime mating territory for the horseshoe crabs during their mating season, which locally runs about two and a half months, from April to mid-June, with moonlit nights especially favored, not for romantic reasons, of course, but for the help it provides them in finding their way to the beach and finding each other, the only reason they come onto the beach. 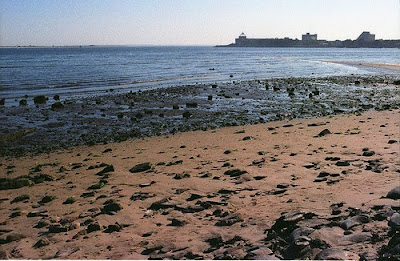 As the sun set, we set out in search of these ancient creatures -- who, by the way, can go a full year without eating -- and found a lonely male, but also what looked to Andrew to be a mass of horseshoe-crab eggs, which matched the description he had just given in response to a question of what the eggs look like, but surprised him because normally the female (who's way larger than the male, by the way) buries the egg clusters in the sand to provide them some protection from predators from air, sea, and land. However, someone with a smart phone was able to provide googled confirmation horseshoe-crab eggs were indeed what we were looking at.

Considering how much Andrew was able to tell us about these remarkable creatures -- and there were lots of good questions from the assembled horsehose-crab voyeurs -- it was cheering when he wasn't sure about the answer and allowed that he doesn't know everything about horseshoe crabs. As darkness set in, the crabs became bolder about venturing onto the beach, and Andrew was able to pick up mating pairs of them, who disengage with great reluctance. By the time the official presentation drew to a satisfying close, and Andrew said he was going to continue walking the beach and anyone who wanted to join him was welcome to, a shrewd hard core of us -- more, apparently, than he expected -- eagerly clustered around him, and the best part of the night, with full darkness (but a few people carrying small lights so we could see something), ensued. The horseshoe crabs were doing it all over the beach, and we were privileged to witness an important piece of the hemisphere's ecological balance taking place before our amazed eyes.

I'm embarrassed to say that I've only recently become aware of New York's Urban Park Rangers, who are a treasure. They perform all sorts of functions for the city's Parks Department, but one of them is conducting terrific tours like this throughout the city's parks. (In the only one I've taken so far, of the water course of Brooklyn's Prospect Park, on a grimly overcast Sunday afternoon, I wound up having a one-on-one tour with Ranger Vinnie, which was shortened only a bit by an ensuing downpour. The Urban Park Rangers, I had been told, come prepared to do their thing come what may.)

The return trip from Plum Beach again took nearly two and a half hours, even with a spectacular connection to the returning B44 Limited bus. I wasn't even sure I knew where the return route started, but no sooner did I think I had found the correct bus stop than the correct bus rolled in to confirm it! Fortunately, with the holiday today, I didn't much care how late I got home. And while I know I spent nearly five hours in transit, what a night!

Then I was awakened about 5am by what I realized after a moment was a torrential downpour outside, which seemed to constitute a dramatic thumbs-down on some possible activities I'd scouted for Memorial Day. I could have done one or both of a pair of Central Park tours, in areas and/or from perspectives that would be new to me. Or there was a link I'd found to a walking tour of Jones Beach, the beach that Robert Moses build on an island off the south shore of Long Island in the '30s. In nearly 50 years of living in New York, for as much as I've heard the storied name of Jones Beach, I'd never set foot there. 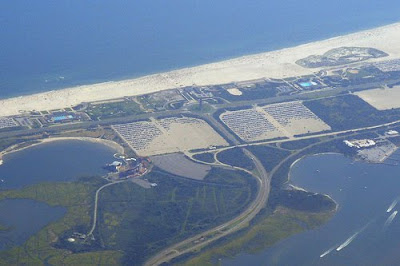 When I tuned in a weather forecast, it seemed pretty insistent that the rain was over, and we had a good, sunny day in store, and so I duly dragged myself to catch the 11:10 Long Island Rail Road train to Freeport, successfully met the Shorewalkers group, and was eventually able to crowd onto an N88 bus, which I was delighted to discover took my regular unlimited Metrocard, and which duly slow-mo-ed its way along the parkway (also built by Robert Moses, naturally), on what had indeed developed into a prime beach day for the first weekend of "the season," and was eventually disgorged at the western side of the Jones Beach State Park.

It's a lovely spot, though less crowded than I would have expected. Just wait till Fourth of July, I was thinking. But I won't be there. It's a lovely spot, and I'm glad I did it, in the company of people familiar with the place, and it was even worth the $16.50 round-trip train fare to do it once. It's a beach. A nice beach, but just a beach. I can cross it off my "things to do, maybe" list, though.

And tomorrow it's back to work. Sigh. Well, at least I did something this weekend. And how was your holiday weekend?
#
Posted by DownWithTyranny at 6:30 PM