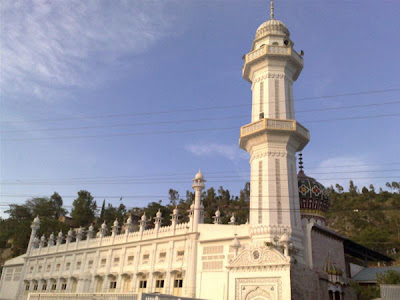 The fabulous Ilyasi Mosque in Abbottabad
Right after the extra-judicial execution of Osama bin-Laden (ex-post facto sanctioned by retired Supreme Court Justice John Paul Stevens), DownWithTyranny, my other blog, ran a post that mentioned Pakistan was considering obliterating the bin-Laden hide-out in Abbottabad to keep it from becoming a shrine. It looks like there's an equal likelihood it could become an amusement park. Forget for a moment that the slimy corporate whores at Disney have taken it upon themselves to trademark Seal Team 6, Pakistani attorney Rashid-ul-Haq Qazi, who visited the compound, had a suggestion of his own: charge people to look inside. "It would be wiser to print some tickets and charge an entry fee," he said.

Now as we now, Pakistan isn't a safe tourist destination for Americans even in the best of times. And this is pretty much the worst of times. That said, Abbottabad has always been a domestic tourist destination and the locals see a pot of gold for themselves in bin-Laden's recent demise in their fair town. I missed it when I drove, in 1969. from the Khyber Pass to Peshawar, Rawalpindi, the Islamabad building site, Gujrat, and Lahore and onward to Amritsar and New Delhi, but Pakistani tourists treasure it as a base for trips to the beautiful Kaghan Valley and the Pakistan Tourism Development Corporation recommends as "places worth visiting in and around Abbottabad" the Ilyasi mosque with its water spring (photo above), the Shimla view point and Thandiani hill resort.

Pakistani hoteliers in the now notorious town where Osama bin Laden was killed by elite US forces are praying the views and balmy weather still reel in bumper tourist numbers this year.

Considered one of the quietest towns in the northwest, nestled in pine-dotted hills and popular with day-trippers from the capital, Abbottabad is listed on Pakistan's official tourism website as a "popular summer resort."

...Officials say the bin Laden episode might not dampen the inflow of tourists, since the peace of the city was barely disturbed and business has continued as usual. Indeed, said one, it might even be a bonus.

"I believe that tourism will not be impacted-- rather, more people are coming to see the place where the incident happened," provincial secretary for tourism and culture Azam Khan told AFP... Hoteliers were upbeat, saying prospects for this summer were good.

"Praise be to God, we are doing good business and expect a full season," Hummayun Khan, manager of the Alpine hotel, told AFP.

"I don't think the recent incident will have a negative impact, because the city is still normal and peaceful and people are doing business without any fear."

Jibran Mirza, a manager at Gilani's guest house, said some people may this year prefer to go to Murree, another resort town north of Islamabad, but he did "not see any downslide" in business.

"Murree is overcrowded, so families prefer Abbottabad," he added.

I can even see an HGTV House Hunters International featuring charming Abbottabad, which "is popular not just with visitors but with those looking to relocate. Its weather, peaceful reputation and the perceived security of a garrison have drawn many from other cities to work or educate their children."

Pakistani tourists are lining up to get their pictures taken in front of the nondescript walls that hid bin-Laden for 5 years. International tourists haven't flocked to it yet but curious families from Islamabad, Lahore and even Karachi have. Next up will be tourists from the Gulf states. 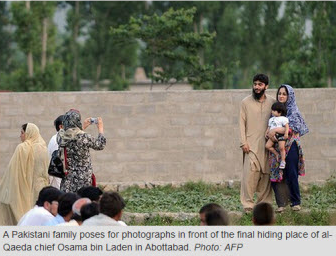 Posted by DownWithTyranny at 1:16 PM