Is Royal Air Maroc Even A Worse Airline Than Delta-- The Worst Airline Of 2010? 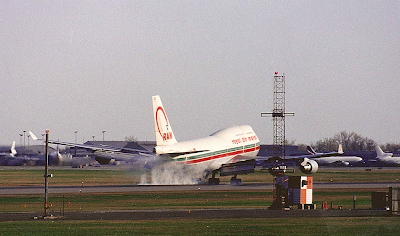 I stopped using drugs decades ago. But Saturday I could have used some to start 2011 off on the right foot. I didn't have any, though, and I found a fine substitute, courtesy of Apple-- the new iPod, which is the size of a matchbox, only way thinner. The day started off dreadfully enough in London. I had a flight out of Heathrow at noon but I had noticed the night before that the city had just closed down all the main thoroughfares in the West End to muck things up on New Year's Eve. I had a feeling that the parade-- basically for Russian and French tourists-- on January 1 was going to also be a traffic mess. I was right. I thought the best chance I had of avoiding it would be to leave early. I was out of the hotel at around 7AM-- pitch black, freezing, wet though not raining... and all the streets around the hotel already closed to traffic!

I have a terrible cold I picked up from one of my friends in Morocco and I was a mess-- a mess who had to walk a mile to find a street with traffic and a taxi to get me to Paddington Station and the Heathrow Express. I had a 20 pound note. Paddington should be half that. Turns out the taxis have a 4 pound New Year's Day surcharge. I still made it on budget-- with enough left over to buy a couple of packs of tissues for the plane. The plane, of course, was late leaving and the two new B.A. business lounges in Terminal 5 are not very impressive-- unless the goal is to remind business travelers that there really is a big difference between flying first class and flying business class. Anyway, there were long lines that didn't seem to move everywhere and I was getting jittery. That's when I realized that my music would brighten me right up, the way drugs might have when I was in my late teens. And did it ever. I was soon singing and dancing, entertaining myself and everyone around me. Blink 182, Jesus and Mary Chain, Frank Sinatra, Black Eyed Peas, Bodeans, Libertines, Offspring, Andrea Bocelli, Depeche Mode, Sisters of Mercy, Velvet Underground... The battery ran down while I was waiting for my luggage at LAX. My bag was among the first half dozen to come down the carousel and life was good.

People were still getting off the plane when I was already in a taxi on my way home to a nice, long steam shower. L.A.'s "freezing," people say. It's 60. In London it was in the 30s. There's a difference, a big one. London's already a memory, although I just downloaded some photos Roland and I took of each other at the Tate Modern on Friday. Here I am in front of a triptych by my very favorite artist: 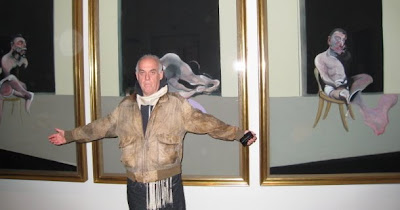 And here's Roland in front of a painting by Cy Twombly, who he really, really hates: 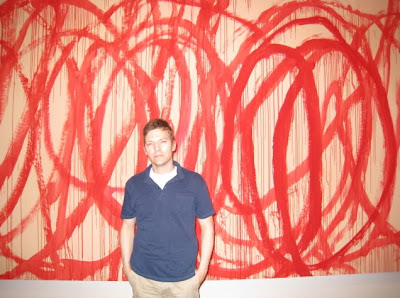 I know I'm always ragging on what a crap airline Delta is. But I have a new nominee for worst airline ever. Roland reminded me of how dreadful Timbuktu Air and Mali Air both are. On one of them a guy got on the plane with a gigantic sword and there was a big brouhaha over whether he could carry it or not. In the end a compromise was worked out. He handed it over to the stewardess, who gave it back to him after we took off. India's Sahara Air was even worse. They were selling standing room and the restrooms were filled with boxes of TVs and items like that that the crew was transporting for themselves. But Royal Air Maroc, considered one of the best airlines in Africa has got to be 2010's pig-in-the-poke. We've flown it back to various European cities in the past and never noticed how really bad it is. This time we did. And so did everyone else we talked to about it.

Back in the U.S. before the trip began they arbitrarily changed Roland's flight from Marrakech to London, meaning we wouldn't be flying together, even though we bought them at the same time with the same credit card. We called their 1-800 number dozens of times. No one ever answers. Never-- no time of the day or night. I asked my travel agent to try. He confirmed my experience. Royal Air Maroc doesn't take phone calls-- nor do they answer e-mails. Everyone in our party had bad experiences flying into Marrakech and in one case, home to the U.S. I'm guessing though that the cockroaches didn't mind.

Royal Air Maroc deteriorating customer service has resulted in some unexpected types of passengers on board lately, cockroaches.
These critters do intermingle with passengers in search for food, as shown in this video, and customers were forced to play exterminators. Customers have complained for some time that unless Royal Air Maroc recruits its personnel based on merit and not on nepotism, and works to instill work ethics in its work force, where good work is rewarded and mediocrity is punished, it will not realize its potential and become a trusted international airline with Casablanca as a major hub.

An analyst, M. Zakaria, said  "Royal Air Maroc prices keep going up while its service continues to go down. On the topic of high fares, Royal Air Maroc management's mistakes are causing the high fares and accentuating bad service.

RAM made four major mistakes. The labor agreement with their pilots, the bad investment especially when they purchased Air Senegal and also starting  low budget airline, Air Atlas (A flagship airline should not be in low cost business) and lastly the high price of Fuel (RAM pre-payed for the fuel back when the barrel was almost $100). So the customers are paying for RAM mistakes.

RAM pilots are amongst the highest paid pilots in the industry. They average is about  $100K/Yr where as EasyJet, Jet4U and Air Arabia pilots make less than $40K/Yr. It's not just the pilots that are burdening  Royal Air Maroc overall payroll, their higher Managers are also getting paid higher than average. So RAM need to charge more to pay the high salaries/benefits. Shipping with Royal Air Maroc is also problematic, their Cargo business has been in the red for many years.

I never begrudge working people decent salaries-- even though the landing in Casablanca was one of the worst I had ever been through. But I did watch the cargo being unloaded and it absolutely looked like the cargo handlers were competing with each other over who could break the most stuff. I should mention that the stewards on the flight from Casablanca to London were very professional and solicitous and that even the food was decent.
Posted by DownWithTyranny at 7:30 PM