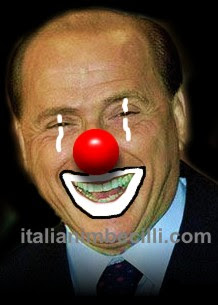 Berlusconi uses the same image consultants as American right-wingers
It was just a year ago that we spent a few weeks living in Monti, a less-known central Rome neighborhood tucked away behind the touristy Forum, very close, much oddly inaccessible to anyone not looking for it. We rented an apartment, although when we returned to Rome a month later we stayed at the Parco dei Principi down by the Borghese Gardens.

It's been kind of scandalous that Italy's clownish Prime Minister has botched the state's preservation and tourist promotion efforts with his breathtakingly corrupt and right-wing austerity agenda. The solution to a potentially crumbling tourist sector-- a major underpinning of the Italian economy-- is a new tax leveled against (non-voting) tourists. The new tax on accomodations began this week.

Even campsites fall within the tax’s remit, with campers paying an added €1 per person per night to sleep under canvas-- although youth hostels are exempt from the charge, while the fee does also not apply to visitors younger than the age of ten.

The tax will be levied on the first ten nights of any hotel stay in the city-- or the first five nights for those staying on a campsite.

Local authorities hope it will raise around €80million (£69million) per annum, which will be used on the maintenance and promotion of a city that attracts some 30 million visitors every year. Rome has some 3,800 hotels, guest houses and bed-and-breakfast options.

Although the fee is theoretically small – for example, a three-night weekend away for a couple in a three-star hotel will equate to an extra cost of €12 (£10) at the end of the break, an amount that will barely pay for two cappuccinos in a central coffee shop-- the tax may cause a certain amount of inconvenience when guests come to pay it.

The fee must be settled on checking out of a hotel at the end of a stay-- and only in cash, meaning that 21st century travellers used to paying for everything with a credit card will need to remember to hold back a little paper money to take care of the extra amount.

Some foresee problems with the charge.

“These increases-- especially tax on accommodation-- will make it more difficult to compete with countries such as Spain and Greece, which have more competitive hotel prices,” Giorgio Sansa, a Rome-based tour operator, told The Scotsman.

“Tourism is our main income and prices in Rome are already high enough, so although it appears only a small increase, for a family on a break in the city it will add more to the final bill and be noticed.”

“I don’t think it will stop people coming to Rome,” Mr Sansa continued, “but I think we will see groups choosing to go to other destinations instead, as we now have to add the charge when we sell tours.”

Nor is the accommodation charge the only new fee that will hit visitors to the Italian capital in the pocket this year. January 1st also saw the adding of a supplementary €1 to the price of museum entry in Rome for non-residents.

Since Berlusconi's rightist, corporate government took power half of Italy's cultural budget has been cut to placate Berlusconi's wealthy, selfish backers who simply do not think they should be taxed. The results have been catastrophic. Look at Pompeii, which draws something like 2.5 million tourists a year. Neglect contributed to the collapse of a 2,000 year old frescoed building used by gladiators after heavy rains weakened the foundations.

It's been just over five weeks since the House of the Gladiators collapsed at Pompeii on November 6. Then, in smaller incidents on November 30 and December 1, two walls also crumbled at the site. Outrage over the historical losses led to calls for the resignation of culture minister Sandro Bondi, but Bondi, a close ally of prime minister Silvio Berlusconi, has refused to leave his post. How was this disaster allowed to happen, and-- with Berlusconi having just narrowly avoided a vote of no confidence in the Italian parliament today-- how does Italy plan to cope with what has quickly become a matter of worldwide concern?

Heavy rains were said to have been responsible for the collapse of the House of the Gladiators, but underlying issues of drainage and maintenance worsened the structure's ability to weather the storms. As early as 2005, a Naples newspaper reported a commission's findings that almost three-quarters of the site was at risk of collapse, and that 40 percent of its buildings were in severe need of restoration.

Experts have had harsh words for the Berlusconi government's maintenance of the site. An emergency commission was created in 2008 to cut through the red tape and handle Pompeii's many problems. But as journalist and archaeological expert Luigi Necco told NPR, the people in charge of the site have been more concerned with investing in flashy multimedia accessories than archeological preservation.
"This Disneyland here in the center of Pompeii," Necco said of the ill-spent funds, speaks of a "disdain for culture, disdain for the past, disdain for history."

The head of the emergency commission, Marcello Fiori, has specifically been accused of spending too much money on flashy features such as a restaurant and a controversial renovation of the amphitheater, the Art Newspaper reports. Among the changes made at Pompeii, one that came under particularly sharp criticism was a plan to rid the site of stray dogs. After a staggering outlay of €86,000 ($114,000), many dogs still remain.

...The largest archaeological site in the world, Pompeii is estimated to receive between two and three million visitors annually. Pietro Giovanni Guzzo, an archaeologist who supervised Pompeii for the culture ministry between 1994 and 2009, told the New York Times that it would cost about €260 million ($348 million) to safeguard the excavated city. In an atmosphere of stringent cuts-- the Italian culture budget was reduced by almost 30 percent this year, according to AFP figures, and almost $400 million in cuts to culture are planned for 2011-- there is intense concern that Berlusconi's government will not find the sums of money needed to preserve Pompeii.

Italy's cuts contrast sharply with the approach of France and Germany: this fall, Germany pledged to leave cultural funding unchanged, while France actually increased its culture budget by 2.7 percent. Maurizio Quagliuolo of Herity, an organization that promotes preservation of Italy's cultural heritage, told AFP that "the problem today is that Italy has still not understood that its cultural assets should not be considered a luxury when the economy is in crisis, but rather as a fundamental part of recovery."

UPDATE: More Berlusconi... How Could I Resist?

Looks like Berlusconi has more in common with American conservatives than just image making. The newest investigation is about his romps with underage prostitutes and, of course, the coverup.

Italian prosecutors are investigating accusations that Prime Minister Silvio Berlusconi paid a 17-year-old girl for sex and abused the powers of his office by trying to cover up the liaison, officials said Friday.

...The public prosecutor's office in Milan said in a statement that it was investigating allegations that Berlusconi and Lombardy regional councilor Nicole Minetti attempted to conceal encounters between the prime minister and a then-underage Moroccan dancer known by the stage name Ruby Heartbreak. Police searched Minetti's office and home as well as sites tied to unnamed "other people" involved with the case, the prosecutors said.

Berlusconi is also suspected of trying to obtain the girl's release after she was arrested on theft charges in May, with his office reportedly falsely telling police that she was the granddaughter of Egyptian President Hosni Mubarak and that her detention would cause a diplomatic row.

Posted by DownWithTyranny at 7:00 AM